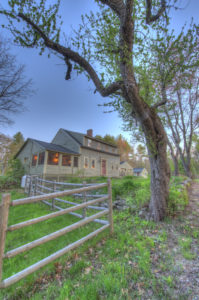 There are so many reasons why we decide to be farmers. Traditionally it has been a profession passed down from one generation to the next. You were often expected to take on the stewardship of the family land. Others took up farming as an alternate revenue stream to the corporate world as either a first or second career. However, it is not uncommon for the farm to wind up on the negative side of revenue by the end of the year. USDA’s last census showed the average net income of a small farm to be less than $7,000 per year. So why is it, that in today’s consumer driven culture, so many are choosing farming as a way of life?
The answer may be found more in the black soil than in the green backs. For such a question, I decided to approach someone connected to the land and a much higher source. Charles LaFond, owner of Blackwater Bluff Farm in Webster, NH, is a master potter and an episcopal priest who serves as the Reverend Canon for Congregational Life in the Diocese of New Hampshire. Seeking solace and reflection, he began his way towards silence in a monastery. Monastic life secreted him away from the daily grind of noise which surround most of our lives.
Although Charles expected his connection with those around him to change, it was a pleasant surprise to discover one of the biggest changes to be his love of the land. Every major religion connects people to themselves and others by also connecting them to the earth. Charles noted how he became a “convert to nature.” He was someone who lived in cities his entire life. The peace he achieved from life at the monastery’s country house was a fortunate fringe benefit. As a monk, he had six prayer obligations a day, was host to a constant stream of visitors and cooked every meal for the brothers and guests. The seven days a week schedule created a monastic life that paralleled the busyness of what he left behind. Upon leaving the monastery to come to New Hampshire, his Spiritual Director said, “If you really want a contemplative life, work the land.” Charles took this advice and began to love farming outside the monastery walls.
His search led him to the Carlisle family farm. It started in 1847 with 60 acres primarily as a source of family sustenance. Over the years, the land was subdivided out for family members. After several generations, the original lot sold to Charles was reduced to 2 acres with the homestead. In collaboration with his neighbors, it is now brimming with chickens, bee hives and an ever growing list of crops. The farm provides far more than table fare. As Charles describes the real reason to tend the land, “it feeds a soul hungry for uninterrupted silence.”
Even those who have been farming for generations, will tell you they feel the most at peace when they are plowing the field or planting seeds or harvesting. It is during these times away from the stand, where one can find silence even amongst the roar of a tractor engine.
When a question was recently posted on Facebook about why some take up gardening or farming, there was a commonality expressed in every answer.
Nanda wrote of how she lost her will to live, but rediscovered it in seeds. Having an active hand in life gave her a new sense of being. In another response, Allison spoke of her serious car accident which confined her to bed for two years. Her husband built a raised bed behind their apartment. She said, “It gave me something to do that surrounded me with life, beauty and a sense of purpose.”
The American Horticultural Therapy Association points to Dr. Benjamin Rush, a signer of the Declaration of Independence and often noted as the “Father of American Psychiatry” who reported how “garden settings held curative effects for people with mental illness.” There is no question the calming feeling one receives when they leave the cacophony of visual and audio noise of the city behind them to plant, tend or harvest a plot. It is noted as a medicinal treatment for returning veterans since World War II. VA centers across the country have or are in the midst of planning therapeutic gardens.
You may have seen schools and churches turning their once manicured hedges and lawns into community learning gardens. Like Blackwater Bluff Farm, the monetary return on investment is often realized as a deficit, but the feeling of fulfillment is immeasurable. Though the taste of a warm rosy red Brandywine can draw a crowd, for some it may be the therapy in growing the tomatoes which really satiates our desire to farm.
Sidebar
There are many more organizations to seek out to learn more about the value of farming therapy.
• American Horticultural Therapy Association – http://www.ahta.org/
• Horticultural Therapy Institute – http://www.htinstitute.org/
• VA Hospitals – http://www2.va.gov/directory/guide/home.asp?isflash=1
If you have a farm and would like to find a way to add a therapeutic side to your business, there are some easy first steps.
• Create a walking path in your orchard or field.
• Work with a local VA Hospital to start a program helping our veterans.
• As always, connect with your local Ag Extension Office. http://www.csrees.usda.gov/Extension/
Being aware of the many reasons why someone would get involved in agriculture at any level (from starting a farm to visiting a farm stand), helps us to build a stronger network for all.
Mason Donovan owns a hay farm in Boscawen, NH and founded The Yard Project organization to protect farmland, promote sustainable organic practices and assist local farmers. Visit www.TheYardProject.com for more info. He can be reached by email at FirstYard@TheYardProject.com.