Home » Posts » For Disease-Resistant Apples, A Moment in the Sun

For Disease-Resistant Apples, A Moment in the Sun

Welcome to the Northeast SARE Spotlight! SARE (Sustainable Agriculture Research and Education) offers grants to farmers, educators, universities and communities that are working to make agriculture more sustainable – economically, environmentally, and socially. Learn about whether a SARE grant would be a good fit for you.

It was a winter morning in 2006, and Lou Lego was indignant. Leafing through Core Report, an apple industry magazine, he had discovered a startling claim: the new disease-resistant apple varieties which had produced beautiful fruit on his own farm did not have the “quality” to be grown in large commercial orchards. “This was certainly not our experience,” Lou says, his voice as flavorful as the heritage apples he favors over more conventional fruits like Empire and Red Delicious.
Over 25 years, Lou has experimented with many apple varieties, growing newer disease-resistant strains alongside classic European and early American fruit with names rich in history: Northern Spy, Bramley’s seedling. The most successful apples become fixtures on Elderberry Pond, the family’s 100 acre certified organic farm in Auburn, NY. Visit the farm, and you can try them all in the tasting room or in the farm restaurant run by Lou’s son Chris, a Culinary Institute of America graduate, where the prized heirloom apples are baked into seasonal desserts like a baked apple nest featuring Caville Blanc d’Hiver. Disease-resistant varieties have grown well at Elderberry Pond for several years, but Lou thinks that Core Report discouraged their use because grower’s associations like the New York State Apple Association, which produces Core Report, receive much of their financial support from chemical companies. If they endorsed disease-resistant apples, which do not have to be treated with chemical sprays, the chemical companies would lose revenue and perhaps reduce their support to the grower’s associations. 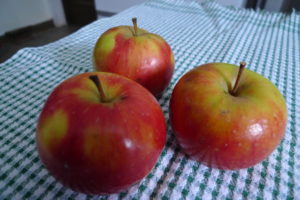 So Lou came up with the idea of carrying out a systematic evaluation. By comparing new disease-resistant apples to popular commercial and heritage varieties, he could show growers that these varieties really could work for them. Lou emphasizes that the stakes are high. Apples are number one on the Dirty Dozen (the annual list produced by the USDA EWG, which lists the 12 most pesticide-laden fruits and vegetables). For both organic and non-organic farmers, disease-resistant apples provide an easy way to reduce chemical exposure.
The Proof is in the Pie

How do you prove that one apple is better than another? The answer seems simple: take a bite. But since many people cook apples as well as eating them raw, getting to the core of the matter required considerable effort. With help from a SARE grant, Lou and his co-workers harvested an exhaustive variety of apples and prepared them in several different ways. They squeezed the fruit into juice and cider, baked it into pie, sliced and dried it, and of course, set some aside for plain old munching. A panel of tasters decided which products tasted best.
“I think every farmer has questions that they would like to have answered,” Lou says. “The farmer grant program is an opportunity to do evaluations to answer these questions for you and for other farmers.” And even though writing the proposal can be onerous, he points out that putting your plans down on paper can help you organize your farm’s future—even if you don’t end up getting funding.
An Apple in the Hand… 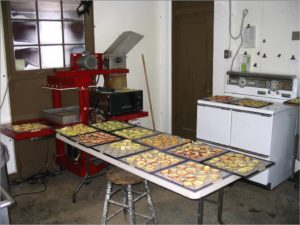 Apples being dried for taste testing. Photo by Lou Lego.

For straight-up eating, the top 10 list contains mostly familiar names— Gala, Golden Delicious, Honey Crisp—as well as a few more unusual varieties like Pink Pearl, a crisp, tart apple with signature bright pink skin, and Esopus Spitzenberg, a spicy heirloom rumored to be a favorite of Thomas Jefferson (it’s also Lou’s apple of choice.) But for juicing, there were some surprising results. Gala, which ranked high among the eating apples, produced a disappointingly bland juice. “You can’t pick a great juicing or cider apple by tasting it out of hand,” Lou says, explaining that when you bite into an apple, this produces “volatile flavor bursts” that disappear when the apple is crushed and juiced.
Another surprising finding: many sweet-tasting apples, like Pound Sweet, were low in soluble sugars—and vice versa. It’s low acidity and not sugar content, Lou says, which provides the sweetness that we taste when we bite into a Honey Crisp.
Lou’s favorite findings, of course, are those which confirm his support for disease-resistant fruit. Pristine, the farm’s bestselling apple—a disease-resistant variety developed by the Purdue, Rutgers, Illinois (PRI) breeding program—was a favorite among taste testers. And several other disease-resistant apples also scored high (see sidebar for complete details).
A Sustainable Future
Lou hopes that the project will encourage larger growers to plant some of the new disease-resistant varieties. It looks like he may have gained a following: after publicizing his results, Lou received scores of invitations to present at conferences and apple festivals throughout the Northeast. But although growers might be grateful for the findings, home cooks might be just as thrilled to finally know exactly which apples to use in that Thanksgiving pie.
This article discusses SARE grant FNE07-614. To view the final report, visit http://mysare.sare.org/mySARE/ProjectReport.aspx?do=viewProj&pn=FNE07-614. For more information, contact Lou Lego at llego@baldcom.net.
SARE offers sustainable agriculture grants, bulletins, books, an online events calendar and many other resources. Learn more about the Northeast SARE program by visiting www.nesare.org or by contacting Northeast SARE 655 Spear Street University of Vermont, Burlington VT 05405 Phone (802) 656-0471 Fax (802) 656 -0500 E-mail: nesare@uvm.edu

Elisabeth Rosen was a summer intern with the Cornell Small Farms Program in 2011.