Through trial and error, this farmer veteran is learning to harness the power of nature. 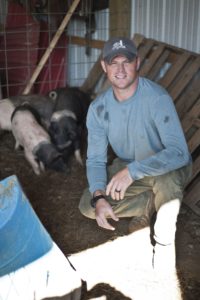 Farmer veteran Rob Smith decided to start farming acreage that’d been in his family for generations after his military service. Courtesy of Liz Smith Photography

So there I was (as every great story begins) … signing the closing paperwork to repurchase the house that I grew up in, which my dad had sold prior to leaving for the Army. Coming back to Kennedy, NY, from our nation’s capital was a great feeling after serving 4 ½ years active duty Army. The city life is not for me. This house that my dad built himself, and I grew up in, sits on six acres. It is mostly wooded, but is surrounded by about 70 acres that has been owned by my family for generations.

I think my story began a lot like many small farmer’s stories do. First my wife wanted horses. Which I was 100% against … so we got horses. Then she wanted chickens for eggs …so we got chickens. Somewhere along the way I started enjoying the hobby farm life and decided to make a go of it. The farmer who was leasing our family acreage had decided to scale back his operations, and we were attempting to find a new farmer to lease the land. That’s when I got the bright idea to buy a tractor, along with hay equipment, and take the hay myself. At that time, I actually didn’t realize that hay is basically just dried grass. I knew nothing about moisture content, soil samples, PH levels, or NPK. I was fortunate enough to have a cousin that has been farming his whole life and helped me immensely — answering my naïve questions, borrowing equipment, and being a great friend. Thank you to my cousin Frank for all your help! 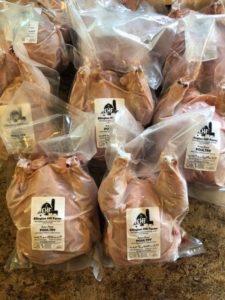 Rob pasture raises his meat chickens, moving them 12 feet per day onto a fresh square of grass as part of his approach to mimic nature’s systems on the farm. Courtesy of Liz Smith Photography

After taking several classes through Cornell Cooperative Extension’s LEAF program, I got my first soil sample. I still don’t know exactly how to read the samples, but my friends at Growmark were able to interpret the results for me and offer a suggestion as far as what nutrients my soil was lacking and how to remedy it. I’ll never forget telling Frank, “I can’t afford $943.00 for fertilizer” and his response, “Is that a Corvette you have for a summer car?” Duly noted Frank, duly noted. I spread the fertilizer as I was encouraged to do by industry standards, but I never understood why this is necessary. I started thinking outside the box about nature as a whole. NPK mixes didn’t really exist prior to WW2 and spoiler alert, there’s been grass a lot longer than that. So, what are we doing to our land that requires such expensive inputs?

Then I found the great Joel Salatin of Polyface Farm in Swoope, VA. I hung on his every word. I read his books, watched his documentaries, and became familiar with his following. He speaks to mimicking nature’s systems by using animals to disturb the land in a controlled way, leaving their own fertilizer behind to feed the soil. Finally, it clicked and I bought myself some meat chickens and built my own Salatin-style chicken tractor. For two years now, I’ve been raising meat chickens and moving them 12 feet per day onto a fresh square of grass. And boy does the grass grow back! I would encourage anyone who’s dumping chemical fertilizers onto their land to really take a look at the way Polyface does things. Joel will explain his proven theory about not needing to add chemical inputs, not to mention the dead–zones and algae blooms the fertilizer runoffs cause, which is a topic for 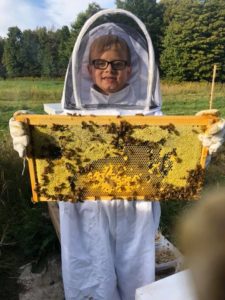 Farming can be a family affair, such as Rob’s son Xander helping with their beekeeping operation. Courtesy of Liz Smith Photography

The physical and mental toughness, perseverance and attention to detail that I had to learn while in the military translates in a profound way. No matter how long the day is — how many times the shear pins on the baler break, the pigs get out of the fencing, or the rain falls just before the hay is dry — I can get through it because I was always taught, when things get tough “put your head down and drive on.”

Nature knows best, and through trial and error I’m learning how to harness the power of nature by using pigs as plows, chickens and horses as fertility managers — and this year we’re adding cattle to the mix to keep the grass at that perfect height for maximum photosynthesis and regrowth. I encourage anyone reading this to spend some time looking at more sustainable agricultural practices and see that we really can have a successful farm through polyculture, not monoculture and following nature’s lead.

My beautiful wife Liz and I own Ellington Hill Farms in Kennedy, NY, with our four children, Hailey, Lily, Matthew and Xander. I'm a part-time farmer and full-time firefighter for the City of Jamestown. I was compelled to write an article for the Small Farms Quarterly after receiving an e-mail asking for “how you got started” stories, and realized I didn’t come from a farming background but somehow ended up here. I encourage anyone with questions to contact me at rob.h.smith83@gmail.com or visit Ellington Hill Farms on Facebook.
Posted in Small Farms Quarterly
Scroll To Top