Case study of a farm reducing tillage to improve soils.

by Brian Caldwell & Ryan Maher
Rob Johanson and Jan Goranson had a good-sized tractor, a 100” rototiller and a potato farm with 35 acres of sandy soil in coastal Maine.  It was the mid 1980’s and they had just purchased the farm from Jan’s mother.  The logical thing to do was to use that tiller to produce a perfect seedbed and plant potatoes.  They did just that, following the University of Maine recommendations all the way.
Fast forward to 2015.  Goranson Farm still produces potatoes, but also a wide variety of other vegetables on over 60 acres, all certified organic.  They offer chicken, pork, and maple syrup at their farm, through several farmers’ markets, and summer and winter CSA’s.  Rob and Jan are respected by farmers throughout the Northeast for their knowledge and willingness to share it. 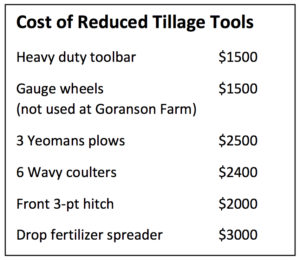 But another, less visible change has to do with the farm’s soil.  Rob realized that for the farm to thrive, he needed to change things.  He cut down, then eliminated his use of chemicals.  The crop mix was expanded.  But he was also pushing the envelope beyond standard organic soil management.
Tilling the soil is a big part of organic vegetable farming.  It incorporates manure or fertilizer and creates a warmed and aerated seedbed for planting, but most of all, tillage is used to control weeds.
The downside to tillage is that it degrades the soil as it performs all of these valuable services.  Soil organic matter (SOM), the living soil community and dead remains of crops and weeds, is critical to soil function. SOM holds water and nutrients, releasing them slowly as plants need them.  It glues soil particles into aggregates, allowing pores to form, which drain rainwater and hold air for plant roots to breathe.  Well-aggregated soils resist erosion and provide an easy environment for roots to explore.
The big rototiller that Rob used to create that clean seedbed to plant potatoes was responsible, over the years, for shattering aggregates and depleting SOM.  Rob’s fields are mostly flat, but the soil is also erodible.  He felt that SOM and soil cation exchange capacity (reflecting the ability of the soil to hold nutrients) needed significant improvement.  Improving water holding capacity, infiltration, and drainage were all on his mind.
Soon Rob was reading about conventional grain farmers in the Midwest who were adopting no-till methods to improve their soil.  The catch was that they also used herbicides to control the weeds.  As a recently-transitioned organic farmer, this approach was off limits.
How to reduce tillage? 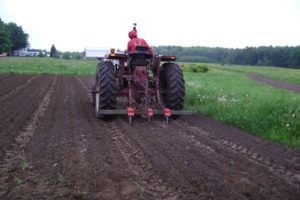 A Yeomans shank can be used for strip tillage and breaking up compacted soil layers. Photo by Ryan Maher.

First, Rob dropped the rototiller and started using the old moldboard plow, which was, at best, a slight improvement.  Several additional soil-churning passes with the disc and cultimulcher were still needed to work the soil fully into the desired seedbed.
Rob was also learning that straight no-till methods often didn’t work well in cool northern soils.  Some northeastern farmers were turning to “strip tillage”, in which tillage was targeted just to the planting row, and crops were planted into 10-12” wide tilled strips.  Often a deep-running shank was used to break compacted soil layers, which form below the plowed or rototilled depth.  This lifted and mixed the soil, creating a good seedbed.  However, in the untilled area between the strips, SOM, plant residues, and the soil microbial communities were not disturbed.
Rob tried strip tillage first in strawberries.  He used a C-shank to rip a strip every 6’ and break up the compacted layer.  Then he removed some tines from the rototiller to till strips and work in organic fertilizer.  He planted in the strips, and used his normal cultivation equipment in between.  With a 12” strip every 72”, only 1/6 of the soil area had been subjected to full tillage.  It worked well and Rob was hooked.  From there, it was a question of getting all the necessary equipment and fine-tuning the system.  Rob is an admitted gearhead, so he started assembling the needed tools and equipment (Fig 1).
In 2008, he borrowed a heavy-duty deep zone till rig, but found it too unwieldy for his scale and fields.  The right equipment turned out to be a toolbar fitted with Yeomans plows to till the strips (Fig 2), followed by wavy coulters (8 wave) to churn the strip’s surface soil into a good seedbed. 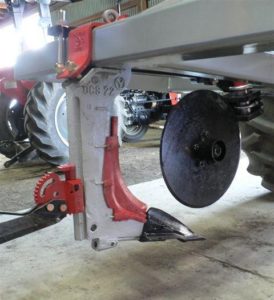 The Yeomans plow is a subsoiler shank that can penetrate down to 20” or more (Fig 3).  The versatile units can be mounted on a toolbar and set for various row spacings.  They require about 30 HP per shank.  The idea is to rip through any compacted plow pan layer in the area under each row, allowing crop roots free access to deep soil layers.  The shanks are best run at 2” below the pan depth, which can be determined by pushing a stiff wire into the ground until strong resistance is encountered.  One can also often borrow a penetrometer from the local NRCS office for this purpose.
The whole picture
Currently Rob’s farm system includes 2 years of soil-building, weed-reducing cover crop + fallow between 2 years of vegetable crops.  The cover crop + fallow period, years 3 and 4 (Fig 4), produces heavy biomass, and has summer bare fallow windows for tillage to kill weeds.  Currently he has 30 acres in cash crops and 30 in fallow/cover crops.  Rob uses the same general approach on all his crops, but tweaks aspects depending on crop spacing, timing, etc.
On widely-spaced crops like winter squash, hairy vetch from the fallow sequence is first flail mowed.  Then come one or two light disking’s and a pass with the Perfecta field cultivator.  Without this shallow tillage, weed pressure is too high.  After this comes a single Yeomans shank, where the crop row will go.  Rows are 6’ apart.  A custom-mixed granular organic fertilizer is placed over the strip tilled area at this point with a front-mounted spreader unit.  The rest of the area receives no added fertility.  A gang of 3 wavy coulters over the strip then performs the final seedbed prep.  Transplants are placed with a Mechanical 1000 transplanter, which is able to handle big overgrown plants if needed.  The transplanter waters them in with an organic-approved liquid seaweed + nitrogen mix. 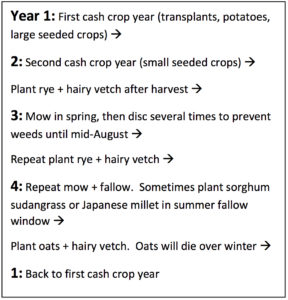 Goranson Farm has a 4-year rotation with a cover crop-fallow period.

The crop is cultivated normally (although “normal” for Rob includes advanced equipment such as a flame weeder, Williams tine weeder, Reigi weeder, and new Steketee finger weeders from Holland) and hand hoed once or twice.  A soil pre-side dress nitrate test is taken 2-3 weeks after planting, and about 25 #/A of Chilean nitrate applied if indicated, to the 12” tilled strip.
Closer spaced, small seeded crops like carrots are handled a bit differently.  They are grown in 3-row beds, roughly 44” wide, with wheel tracks spaced at 6’.  Three Yeomans shanks, without coulters, one for each row, are used for deep subsoiling.  A mixed organic fertilizer with about 45 #/A of N is applied to the whole bed but not the wheeltracks.  The beds are then shallowly rototilled, about 3-4” deep.  Crops are planted with a Yang seeder, usually with pelletized seed.  Multiple plantings are made throughout the season totaling an acre of carrots.  They are cultivated with standard tools and usually hand hoed twice.  No additional fertility is applied.
After harvest, a small-seeded crop field goes into the 2-year cover crop + fallow phase of the rotation.  If there is still time to plant cover crops for good fall growth, the crop residue gets disked and the cover crop is planted, typically rye and vetch.  If it is too late in the season, crop residues are untouched until the following spring, allowing for weed seeds to be eaten by birds and ground beetles.
Evaluating the results
Improving soil is the ultimate goal.  Cover crops and reducing tillage are major means toward that end.  Rob gets good yields with this system, similar to what he got in the past. Soil organic matter has not improved dramatically, but soil tests don’t show everything. He now finds worms even in his driest fields.  This never happened before.

Reduced tillage takes many forms. This story is the first in a series featuring organic vegetable growers that have transitioned to reduced tillage systems. Experienced growers at diverse scales are developing strategies for tackling weeds, planting, managing cover crops and incorporating amendments. Look to future SFQ issues to learn the practices that are helping these growers build better soils. Contact Ryan Maher of the Small Farms Program for more information on this project: ryan.maher@cornell.edu.

Over the years, Rob has seen weed pressure go down on his farm.  Squash, sweet corn, and potatoes used to be the weediest crops.  Now they are the cleanest.  Part of this is due to better equipment including the flame weeder, but he also thinks it is key to keep the fertilizer concentrated where the crop gets it—not the weeds.
Another big improvement is labor during the spring tillage season.  For some crops, he feels this has been reduced by 75%, with a corresponding reduction of machinery wear and tear and fuel consumption.
Rob continually refines his equipment and methods.  His future plans involve purchasing a no-till drill so he can make fewer trips across the fields when planting cover crops; and working with richer cover crop mixtures which can improve the soil even more.  He continues to read about research on reduced tillage with organic methods, goes to conferences and grower meetings, and participates with university and Extension research.  Those interested in reduced tillage would be wise to begin on a small part of their acreage and work out any kinks before going whole hog.  That said, Rob’s advice to farmers young and old, who are thinking of trying reduced tillage is:  “Proceed post haste! Get on with it!”
Brian Caldwell and Ryan Maher are Research/Extension Support Specialists with Cornell University in Ithaca, NY. They can be reached at bac11@cornell.edu and rmm325@cornell.edu respectively. To learn more about Rob and Jan’s Farm, visit http://goransonfarm.me/.