By Patricia Brhel
Cheese unexpectedly became controversial at farmers markets across New York State in the summer of 2011. One duty of the New York State Department of Agriculture is inspecting and enforcing New York state law regarding safe distribution of farm products. In late June, they  stepped into New York City’s Green Market and shut down several artisanal cheese vendors who had been cutting cheese on site and selling it to their customers. New York State Agriculture and Markets Law, Article 20C, states that anyone cutting cheese for sale must have a processing license and do so in an approved facility.
This means that farmers markets without electricity, running water or refrigeration on site can not allow an artisanal cheese producer to cut their product to order at the market. To sell at a market without modern amenities, cheese vendors can legally cut the cheese at their farm, in a room approved and licensed for that purpose, and pre-wrap it in plastic so that it is properly sealed. They can then use an ice chest to keep the product at the proper temperature, only displaying a small amount of product at a time. 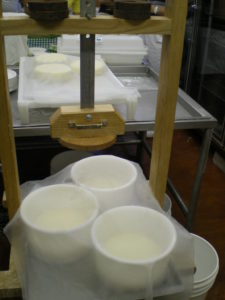 Cheese producers and many of their customers, used to having their cheese custom cut while they waited, were not happy and let it be known.  As a result, the law was temporarily rescinded on July 1. If the cheese is cut in a sanitary manner, it does not have to cut in a licensed processing facility. This temporary solution regarding enforcement of the law is good through September 28, 2011. During this period, the determination currently exempts anyone cutting cheese at a farmer’s market from the need to obtain a processing license.
“While the degree of enforcement has varied, the law has been in place for years and it’s always required a processing license for the premises or pre-packaging of items like sandwiches and cheese that require sanitary conditions. It’s not because we’re trying to interfere with the farmers business, it makes sense from a health standpoint. Some people will willingly follow sanitary guidelines and some markets have a clean space.  Others do not know the rules or are careless. Some markets, because of their location, have rodent or insect problems. Even though Article 20C has been temporarily rescinded, anyone cutting cheese at a market still needs to follow basic sanitary guidelines. They need to keep the product cold, wear gloves and restrain their hair. They need to sanitize the cutting surface and the knife they use, or change the knife frequently to ensure that it’s sanitary. Hand washing is very important. Soft cheeses should still be prepackaged, but hard cheeses such as cheddar and provolone can be cut on site. Retail rules also apply. “The type of cheese needs to be identified with a label, the price per pound prominently displayed and the cut pieces labeled with the identity of the wheel of cheese from which the slice was obtained,” according to Michael Moran, press officer, New York State Department of Agriculture and Markets. 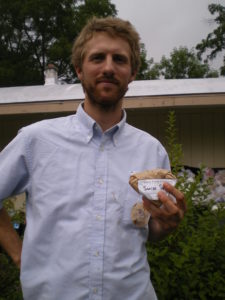 “While we’re doing OK, as we can precut our cheese and sell it at the Central New York Regional market in Syracuse, it’s certainly cut into the profits of many of our vendors. We sell about 60 kinds of cheese at the Regional Market, so most of what we stock is precut anyhow, but we also sell wholesale to many of the farm markets in the area. Until this latest push on enforcement they had been able to buy a 10 lb. block of cheddar and other cheese each week and cut it to order for their customers. Now many of them can’t do that. For instance, one of our customers buys about ten pounds of cheese a week. She used to buy a wheel and cut it to order for her customers. Now we must deliver the cheese pre-wrapped and she’s not making as much of a profit, both because the pre-wrapped cheese is more expensive. In order to cut the cheese on site, she’d have to install a three bay sink and do other remodeling, but the difference in earnings wouldn’t justify that,” according to Molly Buchanen of Buttercup Cheese from Central Square, NY. “We’ve never had anyone get sick from our cheese, but I suppose not everyone is as careful about cleanliness as we are. Nowadays, too, there are a lot more people willing to sue, looking for an easy out, so it makes sense that Ag and Market is requiring this. It’s just a shame that after all these years in business —  we’ve been selling cheese since 1969 —  that we have to make these changes.”
The Governor’s office is considering making the current determination, which rescinds the need for a processing license at the market location, permanent. The regulations can be found at http://www.dos.state.ny.us/info/register/2011/jul20/pdfs/rules.pdf. Text
of the rules and analysis can be obtained from Stephen Stich, Director, Food Safety and Inspection. For information or to comment contact, Stephen.stich@agmkt.state.ny.us, or call 518-457-4492. Check at the New York State register, http://www.dos.state.ny.us/info/register.htm, in October for the state’s final decision.
Pat Brhel is a community volunteer and freelance writer who lives in Caroline, N.Y. She can be reached at lsparrow@hotmail.com or 607-539-9928.