Home » Posts » Tricks of the Trade: Farmer marketing advice from the masters at the Ithaca Farmers Market

Tricks of the Trade: Farmer marketing advice from the masters at the Ithaca Farmers Market

By Aaron Munzer
Any farmers market vendor worth their vegetables can tell you that if you don’t catch people’s attention, you won’t sell your product. So how to do that, without shouting your prices with a megaphone, or throwing your oversized eggplants at customers’ heads? What follows is a list of tips, techniques and strategies that everyone — from beginning vendors to professional market sellers — can use to get themselves and their products noticed.
Engage the Customer 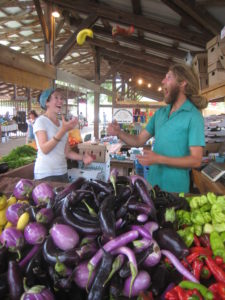 Sounds simple, doesn’t it? In reality, it’s much easier to hide in the back of your stand and read a book, knit a sweater, or finish that crop rotation plan you’ve avoided for months. Fritz Schmidt, owner of The Magic Garden, a plant nursery in Newfield, NY, says he makes a conscious effort to meet passersby with eye contact and a friendly greeting.
“When they’re walking by, they’re resistant to talking, so you have to break the ice,” he says.
Rose Belforti, who makes probiotic raw milk cheese at Finger Lakes Dexter Creamery, points out that engagement doesn’t end with a greeting — she tries to have conversation with as many customers as are interested.
“A lot of people want to tell you about their life, or how they grew up on a farm, it’s like therapy for them,” she says. In addition, she and her husband Tim will often let customers name their cheeses if they can’t figure out what to call it, which builds loyalty, she says.
Another way to get customers to stick around is to offer samples, which Belforti always has prominently displayed.
“You’re never going to taste a cheese like ours, unless you’re at our booth,” she says.
Perform
On slower days at market, you can see Lauren Salzman, who works at Blue Heron Farm, in Lodi. NY, practicing her juggling skills at the back of the farm’s stall. She says it tends to draw crowds.
“Kids seem to like it, and parents follow their kids over,” she says. “I just do it to keep my head straight, but a lot of times people start clapping.”
Schmidt does the same: on market days, he brings his banjo and plays a few tunes in his booth, but he’s not sure if it’s a draw or a deterrent.
“Sometimes it drives people away, but I think people like it,” he says. “Plus, you can get some practice in.”
Be Unusual
Chris Bickford, farm manager of Early Morning Farm in Genoa, NY, relies on many things to get the farm’s produce sold.
One is unusual varieties — although they stock beefsteak tomatoes and black beauty eggplants, part of their marketing strategy relies on growing unusual heirlooms, like bulbous Cherokee Purple tomatoes, conehead cabbages and long, thin Chinese eggplants.
While we’re chatting, in fact, a family comes up to ask him if he does anything special to the conehead cabbages to get them to grow in a spiral pattern.
“Nope, they just want to grow this way,” Bickford says, tossing one up and down as he talks. That’s another one of his strategies — constantly keeping the vegetables in motion. He’s always rearranging stacks of peppers or mounds of lettuce, or tossing new bundles of swiss chard and kale onto the stacks.
“I’m always fussing with what I have, sorting veggies, or tidying up. If you have the same piles of vegetables, people wonder why,” he says. “Also, if you’re moving veggies, say their names out loud, like, ‘Kohlrabi!, Beets! Lettuce!”
Have knowledge
When selling his uncommon yet delicious fruits, like currants, gooseberries, and ground cherries, John Reynolds, owner of Daring Drake Farm in Interlaken, relies on his intimate knowledge of his orchard to impress customers and send them home with more than just a quart of fresh berries or stone fruit.
In one short conversation, Reynolds can tell you about an official ban on currants, the history of the paw-paw fruit, and why Europeans drink their seaberries as juice instead of eating them fresh.
“If I didn’t have the spiel, I wouldn’t sell half of what I do,” he says.
Be a professional
Finally, it doesn’t hurt to stress the obvious advice: be a professional, even in a non-traditional retailing environment like a farmers market.
Wearing farmer chic clothing — clean overalls, flannel, and muck boots — can’t hurt business, says Belforti, who thinks about her outfit before every market.
A good-looking display is also important, says Linda Buyukmihci-Bey, of Unexpected Farm in Watkins Glen.
“You need to have clean produce, a nice tablecloth, lots of change,” she says. “And whatever customers want, they get it. If they want a half pound, they get it. If they want garlic stalks cut off, that’s fine. And be generous.”
Aaron Munzer is a freelance journalist writing mostly about agricultural and environmental developments. He is the caretaker of a small farm in Dryden, NY and is also the assistant manager of the Ithaca Farmers Market