Small is Beautiful: Making a Living with 12 Cows on Wake Robin Farm

By Adrienne Masler
FROM VEGETABLES TO DAIRY 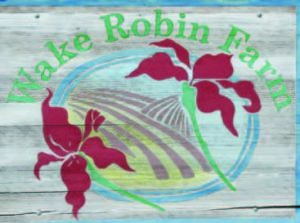 After operating a vegetable CSA for six years at Wake Robin Farm in Jordan, NY, Meg and Bruce Schader agreed that they would rather milk cows.  Meg and Bruce were inspired to keep their farm small when they heard about a friend’s grandfather who sent his four children to college on his income from milking 12 cows.  In order to make their new operation viable, they built a creamery and learned how to produce yogurt in 2006. “We had the idea that we could just transition like snapping our fingers,” says Meg, but they quickly learned that it wouldn’t be that easy.  Despite challenges – the pasteurizer arrived six months late and Meg needed an appendectomy in 2006 – Wake Robin Farm is now making a name for itself and the Schaders have expanded their product line to include bottled milk and artisan cheeses.
STARTING OUT 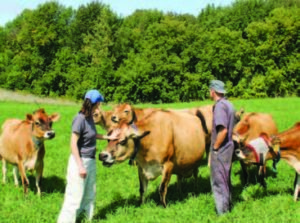 The cows are on pasture all summer Photo by Adrienne Masler

Before embarking on the transition, the Schaders researched on-farm milk processing.  They learned that yogurt was the best product for a start-up because it’s easier to make than cheese and has more value than bottled milk.  They created a business plan with assistance from NY FarmNet, which Meg says has helped them to focus their goals and secure funding.  She adds that loans provided their working capital for the first few years.  Their debt-to-income ratio was intimidating at first, but after three years and a lot of hard work, the numbers look better. The management of the dairy is much different from the CSA: all the income from CSA memberships was available by June of each year and the Schaders had a solid number to work with for the rest of the year.  When growing vegetables, they could also predict their input costs (e.g., seeds) with relative ease.  Now they’re learning how to juggle expenses for a variety of supplies such as yogurt cups, vanilla, maple syrup, and their delivery truck.  Meg points out that a price difference of 1 or 2 cents per yogurt cup makes a big difference when she’s ordering thousands of cups.  Through it all, “the energy came from our vision – a vision can get you through anything if you really want it to,” says Meg.  Now they’re milking 12 cows on 45 acres of hay and pasture.  In the summer months, the cows are rotated to fresh pasture every 12 hours, and in the winter they are let out for exercise and are fed hay and about 5 to 10 pounds of organic grain per day; the grain helps to keep the milk components high. 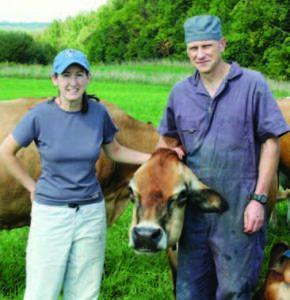 FINDING THEIR NICHE
Though Meg points out that all farms will find their own niches, Wake Robin is unique for more than its size.  All of the milk is processed on-farm and they don’t buy in any additional milk.  There’s no bulk tank – instead, the Schaders milk into 10-gallon cans, which enables them to use milk from different cows for different products.  They usually use milk with the highest butterfat content for the yogurt, which they make rich and creamy.
Meg credits family as the linchpin of Wake Robin’s success.  Bruce comes from a family of farmers; they own the land and some of the equipment.  Meg’s family helps to take care of 9-year-old Hugh and made a loan to the farm.  “Banks often don’t know how to look at farms,” Meg says, but in 2008 they were able to get capital through Farm Credit’s new Farm Start program.
Meg and Bruce are committed to running the farm themselves and making it work with the land, animals, and equipment that they have.  It flies in the face of traditional economic thinking, which emphasizes growth, to ask as Meg does, “How can we stay small forever?”  Wake Robin is poised for a different sort of growth by expanding their product line and by increasing their retail sales.  Currently 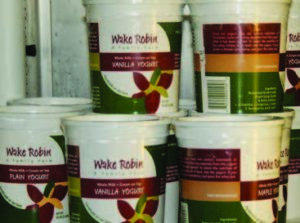 the yogurt is wholesaled to local stores and the milk and cheese are sold on-farm and at the farmers market.  Meg is inspired by the book, Inquiries into the Nature of Slow Money: Investing as if Food, Farms, and Fertility Mattered, which challenges individuals and businesses to grow in social ways, not just in terms of the economic bottom line.
To learn more about Wake Robin Farm, visit http://www.wakerobinfarm.org/
Adrienne Masler was a student intern at the Cornell Small Farms Program in 2009.  She graduated from Cornell with a degree in Agricultural Sciences and is currently an intern at Calypso Farm and Ecology Center in Ester, Alaska. She may be reached at amm428@cornell.edu.