Touched by an Angel: Disaster Averted!

He or she who hauls heavy agricultural loads on highways has to be vigilant in preventing machine failures on busy highways!

I am no stranger to ordeals, mishaps, and minor accidents with farm machinery over the years. Even with the best of intentions, and with safety foremost in mind, accidents can still occur.

I have been hauling loads of round bales of hay for years, both dry hay and baleage. I make a good bit of hay and I buy a good bit of hay as well. All of this hay needs to be transported from its point of origin to the farm. Loads of hay on hay wagons can typically weigh between six and eight tons. That is a lot of weight and tonnage to be barreling down the road with! 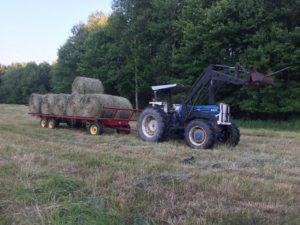 When I was younger and lower on the economic food chain, I was forever dealing with old, junky flatbed hay wagons. Said wagons were blowing tires, front ends would get mangled going around tight corners, and the wagons themselves were dilapidated and falling apart. I told myself that I cannot live like this forever. I saved my pennies and then borrowed a little to purchase a nice, safe, steel round bale wagon with four tires in the rear and two in the front, to the tune of $4,200. This was definitely a step up in the world! I was thinking now I won’t have to worry about accidents and lawsuits. I could haul hay in a much safer manner.

However, let the buyer beware… In order to keep the costs down, many of these newly manufactured wagons come with used truck tires instead of good rugged implement tires. I didn’t have this wagon for long when said used truck tires started blowing out. The whole purpose of buying a new wagon was to avoid perpetual breakdowns!

So, I took my wagon to a tire dealer and had all six tires replaced with brand spanking new 12 ply implement tires, to the tune of about $1,000. They worked much better and I thought life would just be peachy with my now $5,200 hay wagon.

For the last 3 years I have been buying baleage from a farm that is about 12 miles from mine. I have always limited myself to only loading 10 bales of baleage on this wagon for safety’s sake. I would haul it home with the only aggravations being having to deal with vehicles forever trying to hurriedly pass me; I seldom would go faster than 30-35 mph.

One day this fall, I hauled the wagon home with its 10 bales of baleage on it. I unloaded the bales with a front-end loader spear like I have done innumerable times. I then hooked the wagon to a tractor to haul it across the road to await the next hauling venture. 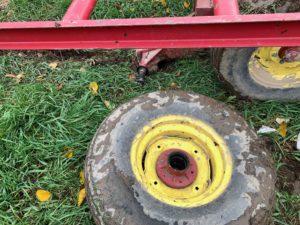 The failed wheel after hauling it 12 miles home. Courtesy of Rich Taber

It was then that the angels looked down upon me. As I was hauling the now empty wagon across the road one of the rear wheels failed and fell completely off the wagon! Not the tire; the whole wheel assembly broke and fell off the wagon.

I had just hauled about six tons of baleage about 12 miles and the wheel failed in my yard, after unloading it. One can only imagine the lethal forces of physics that would have been unleashed had the wheel failed barreling down the highway. It could have occurred just as I was stopping for the school bus. The forces of that much tonnage would have sent that wagon and my truck careening all over the road, into the path of oncoming traffic, or into a ditch. One can only conjecture the carnage that could have occurred!

Here are the lessons that I have learned:

Rich Taber, M.S., M.S.F., is Grazing, Forestry, and Ag Economic Development Specialist with CCE Chenango.  He lives with his chainsaws on a farm that has a 100 acre woodlot in Madison County. He can be reached at phone: 607-334-5841 ext. 21 or email: rbt44@cornell.edu.
Posted in Small Farms Quarterly
Scroll To Top