Raising an organic dairy heifer can be costly. 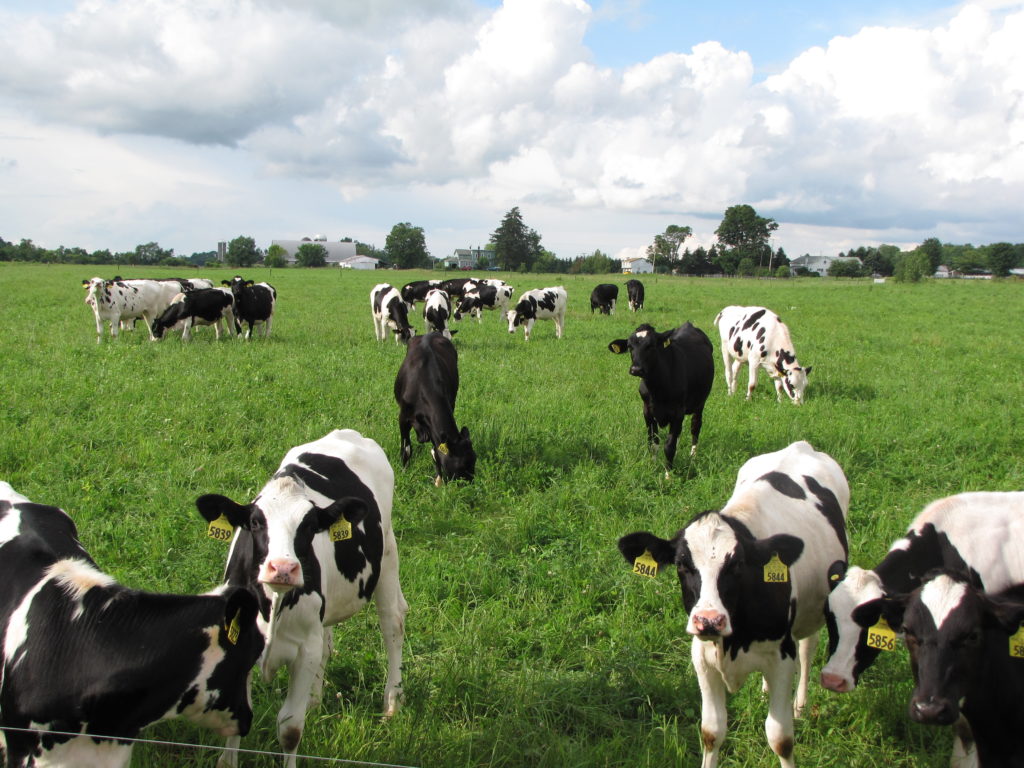 Grazing can reduce the cost of raising organic heifers but the high cost of organic milk and grain during the first year of their lives outweighs this benefit. A. Fay Benson / CCE South Central New York Dairy & Field Crops

The first year of a dairy heifer’s life has the highest per day costs mainly due to the whole milk fed and labor required for young calves. This fact is the reason why the inaction of the USDA to close a known loophole in the National Organic Program (NOP) has allowed certain dairies to raise their young stock with conventional methods which reduces the cost by up to $7 per day. A recent Cornell study compared the costs of production for organically raised calves from day 1 to those raised non-organically and transitioned before freshening.  The study showed that the loophole allowed dairies whose certifiers allowed conventional raising of the newborn calf to one year of age to save $884 per animal for feed and labor. This puts dairies that follow the NOP rule at a significant disadvantage, specifically in the Northeast

In 2014 conventional milk prices peaked and have since been near or below the cost of production. This fact plus the declining market for conventional milk caused large Western dairies to become interested in entering the market but quickly realized their method of high milk production high grain feeding and fewer lactations from the cows made the requirement of raising replacements much too high. Certifiers that oversee those dairies chose to read the Origin of Livestock rule differently to allow heifers to be raised conventionally for their first year and then transitioned for one year prior to milking. The USDA has been aware of this loophole and in July 2013, the USDA Office of Inspector General (OIG) published an audit report on organic milk operations stating that certifying agents were interpreting the origin of livestock requirements differently. According to the OIG report, three of the six certifiers interviewed by OIG allowed producers to continuously transition additional animals into a herd after the initial herd made the transition to organic milk production, while the other three certifiers did not permit this practice. OIG recommended that a proposed rule be issued to clarify the standard and ensure that all certifiers consistently apply and enforce the origin of livestock requirements. The proposed rule of April 28, 2015 would have fixed the problem, but that rule was removed by the new Administration in 2016.

In December of 2018 the New York Organic Dairy Task Force met at the Dairy Farmers of America offices in Syracuse. There was discussion on the negative impact on Northeast organic dairies created by large dairies in western states flooding milk into the organic market. These dairies were utilizing a loophole created in the NOP in the “Origin of Livestock” rule which results in a substantially lower cost of raising dairy replacements compared to organic dairies whose  certifiers allow a onetime transition of dairy animals. The loophole was to be repaired by a new rule in 2015i but it was blocked before it could take effect. The Task Force directed and provided funding for Fay Benson, Cornell Cooperative Extension educator and project manager for the Cornell Organic Dairy Program to complete a study of what it costs for dairy farmers who raise dairy replacements without biocides or growth stimulants such as coccidiostats. The organic method focuses on natural methods to prevent health issues rather than treat them with synthetics. Data for the study was collected from three certified organic dairies in Central New York. Benson used a cost analysis created by Jason Karszes, Farm Business Specialist with Cornell’s PRODAIRY Program. By using the same analysis with the organic dairies as that used for conventional dairies would allow the the results to be compared. Cost and data collected for this analysis included:

The Results for Organic Farms vs Conventional

The most recent publication by Cornell PRODAIRY showed that 18 conventional dairy heifer growers in New York averaged costs averaging $1,060.92 during the first year of an animal’s life. Below are the results of the individual costs of the three organic farms who took part in the study.

Realizing that cost of feed accounts for over 50% and labor 12% of the cost of raising a dairy replacement, any changes to those dramatically impacts the total cost to raise that animal. The first year of a dairy calf’s life has the highest cost per day. This is when calves are fed milk or milk replacer. In the conventional dairy study this period averaged 50 days. On the organic farms milk was fed for an average of 89 days. The reason milk is fed longer on organic farms is to give the calf better vitality, and to protect it from calf health issues such as naturally occurring coccidiosis. On conventional farms the synthetic coccidiostats are used to control this disease and also act as a growth stimulant which shortens the period a calf is fed milk.  Also, during the time calves are fed milk, labor is the most intensive because the calves are handled individually. Allowing the conventional raising of “pre” organic heifers allows these dairies to avoid the higher costs of feeding organic milk and also shortens the expensive period prior to weaning.

Below are some breakouts of the costs per weaned animal per day from the conventional study and the three organic farms. The big difference in milk cost/day/calf between the conventional and the organic is due to the value of the milk being fed to the calf. Organic milk price is more than double the price of conventional milk. Organic Farm A reduced their cost of milk by feeding some waste milk. Organic Farm S had the highest cost mainly due to the 112 days of feeding milk to the calves. They also had the smallest herd size so that labor was spread over fewer animals.