On a recent morning at JADA Hill Farm in Deposit, New York, Ziggy, a 5-month-old Nigerian dwarf goat, playfully head-butted a sister goat from her perch on a sun-drenched slab of rock.

Owners John and Dawn Alfano have fed their 19 dairy goats a breakfast of sweet feed mixed with black sunflower seeds before releasing them to a hillside paddock, where they sunned themselves in dappled grass, snacked on crispy golden maple leaves and hopped on rocks or wooden spools.

Several goats will mate this winter to help grow the small herd, and by next June the Alfanos will resume milking the females for the key ingredient in their handcrafted soaps and creams. 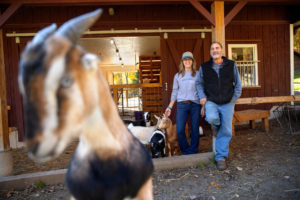 John and Dawn Alfano, owners of JADA Hill Farm in Deposit, New York, with some of their Nigerian dwarf dairy goats. The Alfanos’ sales at Taste NY stores of hand-made goat’s milk soaps and creams, and other products, have offset the cost of running the farm. Jason Koski / Cornell University

“This is the real deal,” John says of the small-batch soaps that Dawn makes in their kitchen during evenings. “From goat to bathtub.”

Before the tub, many JADA Hill products will make one important stop: shelves at five Taste NY retail stores across the state, whose robust sales have helped make the farm a self-sustaining enterprise.

“It’s way beyond what we ever would have expected,” Dawn said of the business.

Started in 2013 by New York Gov. Andrew Cuomo and overseen by the state Department of Agriculture and Markets, Taste NY promotes food, beverages and gifts made by New York farmers, processors and artisans.

The state has partnered with Cornell Cooperative Extension (CCE), which operates a dozen of the stores, including eight at high-traffic welcome centers.

Last year, Taste NY reported sales of $17.8 million, up from $1.5 million in 2014. The program has a retail presence in more than 70 locations, including concessions and carts in state parks, airports and train stations, and pop-up sites.

More than 1,100 vendors rotate through Taste NY stores, selling goods such as syrup, honey, coffee, jam, cheese, beef jerky and spiedie sauce, in addition to soaps, shampoos, creams and pottery. Markets offer grab-and-go sandwiches or make them to order. Some are licensed to sell craft beer and cider.

“Through the Taste NY project, extension has a platform to provide education and support. We are seeing an increase in small business development and farmers are expanding their production,” Giarratano said. “They’re aggregating more land use and extending their growing season, creating a need for additional infrastructure and jobs.”

Finding Home credits the exposure and credibility gained there in part for helping it break into stores in and around New York City, including Fairway Market, which opened the door to new distributors. Now, instead of delivering a case of syrup here or there, Putnam could load pallets onto a semitractor-trailer.

“Those sorts of efficiencies are super-important as you’re trying to leverage out your fixed costs and get to the point that you can become profitable,” Putnam said.

Sales have increased seventeenfold since Finding Home began working with the Todd Hill store (and since expanding to five other Taste NY sites), Putnam said, growing more than 80% in both of the past two years. The Putnams built a 6,200-square-foot facility including a new maple sugarhouse, and their staff has grown from one part-time employee to 14 full- or part-time positions in 2018.

“Taste NY absolutely has helped create some local jobs, and helped solidify our business with the kind of growth that we really needed to justify the investment we had made,” said Putnam. 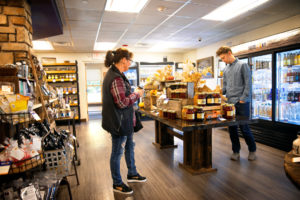 Back in Deposit, about a half-hour east of Binghamton, the Alfanos had been skeptical when CCE staff in Broome County first approached them about Taste NY. Insurance and bar coding requirements looked like too much trouble and expense for their small business, and the program seemed geared more toward food producers.

But after CCE resolved those concerns, business with Taste NY took off, starting at the Southern Tier Welcome Center on Interstate 81.

Dawn said she regularly receives calls, visits and online orders from people who have found their products at Taste NY.

Retired from careers in construction and hair styling, respectively, John and Dawn Alfano have invested their profits in more goats, a larger store and other improvements at JADA Hill, where they host community events including a recent “Pumpkin Palooza.”

“I’m so glad we did it,” Dawn said of the Taste NY partnership. “This is what pays for the farm.”

It wasn’t obvious at first that CCE’s expertise might include running retail stores, Ball said. In hindsight, the Taste NY partnership was “a natural fit,” opening modern outlets for CCE’s mission that tap into the local food movement.

“Growers are looking to extension again,” he said, “not only to educate them about growing their crops, but how to market their crops and about food safety and all the things that go along with it. It’s been a huge success.”

This article also appeared in the Cornell Chronicle.