A Brief History of the Pig in the United States

From a few pigs brought over on a ship to the estimated 5 million pigs currently residing in the U.S., we explore the brief and fascinating history of how and why the hog has become an integral part of our agricultural landscape and why there has been a resurgence in demand for pasture raised pork.

Did you know that the famous Wall Street in Manhattan was named after a border built to keep pigs out of certain areas of the early colonies? Or that in the early 20th century pigs were selectively bred to be leaner in order to produce more meat and less tallow, which was quickly being replaced by various industrial oils? It is easy to overlook the impact that our porcine (piggy) friends have had on the modern American landscape, but as the population of feral pigs continues to grow and thrive throughout the states we are yet again faced with the difficult reality of controlling their population and damage to crops and property.

So how did our forefathers and mothers control and fatten these animals to deliver a suitable harvest while protecting crops and not losing them to the great outdoors? Let’s start at the beginning. When Columbus sailed to exploit the riches of the New World, he carried with him a sounder (group) of pigs for two reasons. The first reason was to stave off hunger if they were blown off course or were lost. The second reason was that once they arrived in the New World the pigs could be domesticated and begin breeding on site.

By the time De Soto began exploring Florida 100 years later he carried with him 13 pigs across the Atlantic. Within 3 years these 13 pigs had ballooned to a population of over 700, giving birth both to the American pork industry and the feral pig problem. The native people of the Americas also took notice of this amazing new animal and quickly learned that given enough room to roam and forage, pigs could be ready for slaughter in less than a year and just a few of these animals can provide enough food for entire family through the winter months. There are frequent accounts of Native Americans being punished for stealing pigs from settlers as well as punishments for allowing their pigs to ruin settler’s crops. These situations must be put into perspective as many of the native people at this time had been ravaged by disease, forced out of the most productive lands, and preyed upon by better positioned tribes.

Eventually, the Native populations were forced to move to reservations. They brought breeding pairs with them as these foraging pigs were both relatively easy to fatten on marginal land and able to be hidden from marauding colonists or hostile tribes. The 1700s witnessed improvements in transportation and storage that would introduce the pork industry across America. New refrigerated train cars (kept cold by ice as engines had yet to be developed) could transport processed meats to centralized locations to be sold or salted. This is how many of the United States most important travel hubs such as Chicago and Kansas City were established. As the U.S. population ballooned, the offal and tallow from pigs grew less valuable (because of advances in petrochemicals that supplanted animal based oils) and the meat became more valuable.

This prompted farmers to develop and grow out leaner pigs. These growers discovered that pigs finished on crop rations from the middle states, such as in the Iowa Corn Belt, produced the most meat and least fat for the lowest cost. So, they began shipping the shoats (baby pigs) to where the feed was harvested to be raised and processed, and then shipped them out to the cities for consumption. 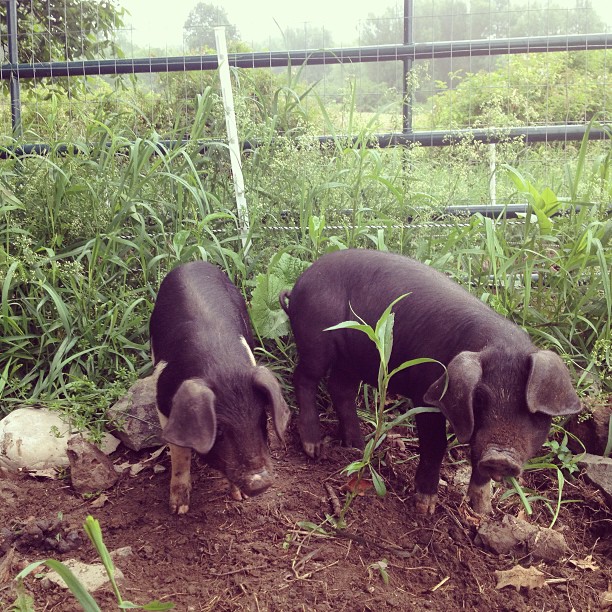 While pigs are relatively easy to keep healthy and fatten, there are some serious considerations when raising heritage pigs in an outdoor settings.
Courtesy of Jason Detzel

Along with this trend of bringing animals to their food, the real industrialized farming of the pig occurred. Instead of raising a few animals in a small yard fed on food scraps or harvesting a few feral hogs from the mountain each fall, producers were now housing and feeding massive numbers of animals in confinement settings. These pigs, like all animals and people, are more prone to health difficulties when forced into extreme proximity. With this, the use of prophylactic antibiotics, farrowing crates, and artificial insemination were developed to further increase efficiency and profit margins. Another disadvantage to the centralized format of production was the large amount of waste generated. In fact these are still serious issues today within the business as evidenced by Smithfield Foods, who has recently been found guilty in court of causing harm to those who live in proximity to their hog rearing facilities.

So here we find ourselves today, with a growing concern over antibiotics in our meat and calls for greater animal welfare. There seems to be a resurgence in folks who are interested in consuming heritage breed, pastured raised, humanly handled, pork products. In other words, consumers are becoming more interested in small batch, non-industrial sources of pork for their consumptions. Many experience sticker shock when we price out heritage pork from local farms. I’ll use sausage, a common product that is generally affordable, for a comparison. I can purchase a pound of sweet sausage for about $3.75/ lb. at my local supermarket. Yesterday, at the local farmers market, I noticed that the same flavor of heritage breed sausage was going for $10.00/ lb. I often wonder how much of that differential is based on marketing and how much is based on the inefficiencies of smaller batch, slower growing, outdoor herds (the topic is beyond the scope of this article).

My hope is to work with local producers to keep the quality of pigs and pork high while bringing the price down to what most folks would consider affordable levels. While pigs are relatively easy to keep healthy and fatten, there are some serious considerations when raising heritage pigs in an outdoor settings. Here at Cornell Small Farms, we host a course called “Getting Started with Pastured Pigs”. This course not only covers all the basics that you need to start your own porcine operation for business or pleasure, it also covers all the major problems and pitfalls that I experienced while developing my own  enterprise and how you can work to avoid them. This 6 week online course will be start on November 6th, run into December and will consist of weekly coursework, a two hour presentation and discussion on the particular topic that week, and follow up activities in the group forums.  For more information on this course and the many others offered by Cornell Small Farms please click here.

We have come a long way since those 13 pigs were brought to the New World by a man searching for riches in the Florida interior. From loosely claimed mountain sounders growing fat off the native land to factories feeding total mixed rations and finishing lean pigs in six months, we are extremely lucky to have the variety of choices afforded here in the Hudson Valley and in the USA.

Jason Detzel is the Livestock Educator at Cornell Cooperative Extensive in Ulster County. He can be reached by phone at 845-340-3990 ext. 327
Posted in Farm Life, Livestock & Dairy, Small Farms Quarterly
Scroll To Top