American consumers have created a sophisticated demand for locally produced Artisan foods that rival imported and industrially produced products.   The 2018 NOFA-NY Winter Conference held in January presented a unique educational opportunity for farmers and food processors to understand the techniques of food preservation and production.  Two presenters, Rachael Mamane and Jeffery Robers, are authors of recent books on small-scale food production, which explore techniques steeped in traditions brought to America by immigrants from around the world. 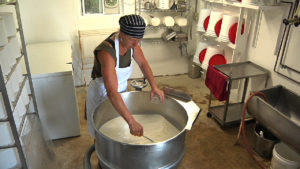 Jeffrey Roberts, Chelsea Green author of American Artisan Cheese (2007) and Salted & Cured (2017) lead 45 participants through a tasting menu, which presented a sequence of cheese and dry cured-meat paired with four different craft beers.  The cheese tasting began with a bloomy- rind semi-soft cheese, like Brie, made from Holstein cows ‘milk. The delicate cheese called Noble Road is produced by Calkins Creamery of Honesdale, Pennsylvania.  Noble Road brie was followed by a Spanish-style goat milk Monchego produced by Sherman Hill Farm of Franklin, New York. Roberts explained the technique of washing curds, that gave both Sherman Hills’ Monchego and Calkins Creamery Cow Tipper its unique texture and flavor.  In addition, Cow Tipper is an example of washing the rinds of the cheese during the aging process with ale giving an ordinary cow Dutch-style gouda a distinctive flavor. The biggest surprise of the “blind tasting” was the delicacy and sweetness of Northland Sheep Dairy’s blue-cheese called Black Mule Blue. Participants in the workshop could appreciate, through the tasting opportunity, the value of this truly fine sheep cheese, which explains its higher cost as sheep do not produce a high volume of milk and much of the volume is further lost in the cheese-making process. 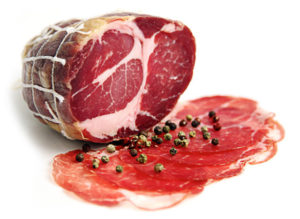 Salumeria Biellese in Manhattan sells Copa, a cured pork charcuterie that is aged for 4 months. This Copa is made from an heirloom Berkshire hog loin, neck and shoulder. The delicate and delicious charcuterie was featured at the NOFA-NY program on pairings of cured meat, cheeses and beer. Courtesy of Salumeria Biellese.

Northland’s Black Mule Blue and the other artisan cheeses paired beautifully with the diverse flavors of several craft beers from Catskill Brewery and the European- style cure meats from the Muncan Food Corporation, Salumeria Biellese and Schaller & Weber, all New York City producers of charcuterie.  Freshly baked bread from Bread Alone, organic artisan bread makers supplied the perfect accompaniment to the dry-cured meat as did condiments of Damson plum jam from Beth’s Farmhouse Kitchen, and Bread & Butter fermented pickles from Divine Brine, all New York small scale producers. The presentation showed the perfect marriage of small farmers with small-scale food and beverage producers.
Although traditionally cured meat has been dominated by pork, in a March 2015 Glynwood charcuterie workshop for Hudson Valley livestock farmers, Roberts introduced a goat prosciutto called Violino di Capra. Violino di Capra was developed in Italy’s Lombardy region centuries ago. The idea of diversifying meat to produce charcuterie rather than solely from pork is finding its way into the American supply chain. Participants at the NOFA-NY Conference tasting had an opportunity to sample Babic, a smoked, delicately spiced, lamb salami from the Muncan Food Corporation in Astoria, New York. The sausage makers at Muncan are exploring adapting traditional pork recipes to accommodate a growing market of Muslim and Jewish customers. Clearly, the customer base for American artisan charcuterie is vast and could surpass that of small scale artisan cheeses but the path for small livestock farmers to connect to larger scale processors still remains undeveloped. 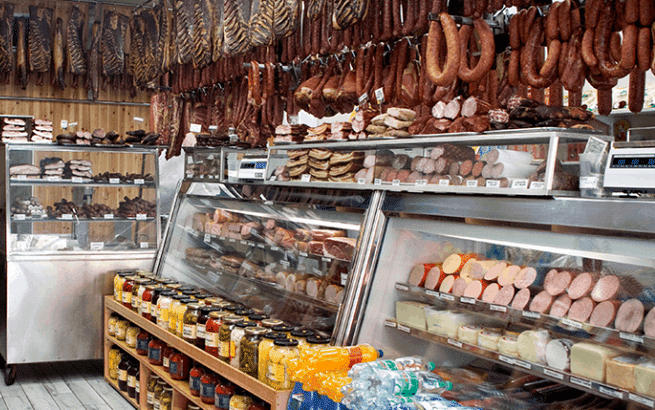 Rachael Mamane, author of Mastering Stocks and Broths (2017) is self-described as a gourmet cook whose mission now extends beyond her small- scale business of producing and selling culinary stocks and broths for home cooks to reducing food waste on a global scale. Although the first goal of her business, Brooklyn Bouillon, was to add value to the harvest of local farmers by using their entire harvest to bring a locally produced culinary staple to home cook shopping at area farmers’ markets, Mamane recognized that her goal could and should encompass a greater good. What began as a small business has turned into a global crusade about environmental education and economic development. Mamane’s workshops at the NOFA-NY Winter Conference had as much to do with the problem of reducing food waste as the culinary techniques of making good stocks and broths for use at home.

Producing value-added products from bones and slaughterhouse waste presents an array of issues for meat producers and processors.  Bone broths are presently being touted as especially healthy to consume, and proponents point to the traditional method of making soup from roasted animal carcasses and bones simmering slowly on the back of a wood stove to extract the maximum benefits from the bones. As appealing as this ideal method of slow cooking may seem,  to be legally and safely sold in the market place, food safety regulations must be addressed.  Bones must come from a USDA inspected processing facilities, and the production of the stock itself must be conducted in an Ag & Markets inspected commercial kitchen.  Packaging and shelf life issues must also be addressed if a producer wants to increase volume and meet the scale of demand expected to sell alongside of commercial stocks and broths. Mamane’s business model is an example of how small-scale food processors and farmers can create added value by being socially and environmentally conscious in their work.

Maria Grimaldi works as an educator for the Northeast Organic Farmers Association (NOFA-NY) and a farm to market consultant with the New York Small Scale Food Processors Association (NYSSFPA). Maria has over 30 years’ experience in the region as an educator and organic farmer. She is also passionate about advancing the importance of supporting sustainable farming for the health of people and the planet.
Posted in Small Farms Quarterly