by R.J. Anderson
Malting barley is an essential ingredient for brewing beer. And since its very recent reintroduction to New York agriculture after several decades of prohibition and disease-induced dormancy, it has also been very challenging to grow to market grade. Those challenges, paired with the rising demands of the state’s three-year old farm brewery law, dominated discussion at the Southern Tier Farm Brewery Summit on November 10.
Hosted by Cornell Cooperative Extension (CCE) of Broome County at its headquarters, the summit brought together brewers, grain growers, and malt house owners for formal and informal conversations with educators and experts from Cornell University and Hartwick College, and officials from state regulatory agencies.
“The event served as networking hub, sounding board, and research access point for those staked to the state’s farm and craft beer industry,” said event organizer Laura Biasillo, CCE Broome County agricultural economic development specialist. “It’s so important to bring all these groups together to talk about what is occurring both in research and real-world growing scenarios so that everybody is on the same page.”
Designed to spur demand for locally grown products and create new business opportunities in and around the brewing industry, the New York farm brewery law has provided tax and fee cuts while easing some regulations for brewers, who must use New York state-grown ingredients. It also features an escalating mandate for inclusion of New York ingredients – at least 60 percent of a beer’s hops and 60 percent of its other ingredients will have to be New York-grown by 2018. Those numbers will jump to 90 percent on January 1, 2024. Currently, the threshold for New York-grown ingredients is 20 percent.
Malting barley, which provides a beer with some of its flavor and texture characteristics as well as its color, is by far the largest piece of the “other ingredients” puzzle. The rising legislation requirements, along with the current challenges of producing malting-grade barley, has many brewers growing increasingly nervous. 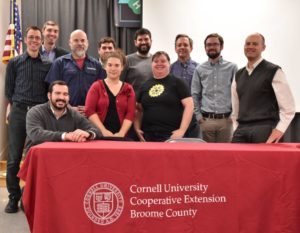 Due to its strict moisture and chemical demands, malting barley is a much more sensitive crop than traditional New York-grown grains such as wheat and feed barley. More susceptible to fungal diseases than other grains, malting barley also has a much smaller harvest window and must be dried with great care and precise timeliness.
Despite those challenges, and the marginal progress made thus far in production-rate success, experts at the Farm Brewery Summit emphasized that the legislation’s ingredient inclusion requirements are within reach.
“They are reasonable and we’re going to get there,” Aaron MacLeod, director of the Hartwick College Center for Craft Food and Beverage, told attendees. A chemist, MacLeod provides quality-control and validation testing for small grains and is a widely recognized expert on malting barley quality.
“Whenever you do something new, there is a learning process,” he said, “and malting barley has to meet very tight quality specifications to ensure that it will perform well in the malthouse and the brewery.”
To substantiate his point, MacLeod cited work by the Cornell Small Grains program, a team of College of Agriculture and Life Sciences researchers and CCE educators. Led by Mark Sorrells, Cornell professor of plant breeding, plant pathologist Gary Bergstrom, and extension specialists Mike Stanyard, Kevin Ganoe and Justin O’Dea, the group is immersed in trials to pinpoint a handful of malting barley varieties suited to New York’s diverse microclimates.
The team also has made significant and immediate strides by delivering current research to growers who are having more success bringing malting barley to market grade.
“At our lab, we have been testing the quality of harvest samples from around the state and are seeing that farmers who work closely with the CCE specialists for several growing seasons are more likely to ‘make the grade’ on their barley crop than those trying for the first time,” MacLeod said. “And those growers are getting more successful each year. That shows that the effort is paying off.”
Still, MacLeod emphasized, the malting barley re-introduction process will require time, patience and even more collaboration through events like the Farm Brewery Summit.
“Farm brewing requires very close relationships throughout the value chain, which is why meetings like this are so important,” he said. “Bringing the farmers, malsters, and brewers to learn together helps build common understanding. Being involved in farm brewing means you can’t have an anonymous supply chain.”
R.J. Anderson is a writer/communications specialist with Cornell Cooperative Extension.