In Penn Yan, NY, commercial vegetable grower Nelson Hoover does not own a car, a computer or a PhD. In fact, as a member of the Groffdale Conference Mennonites, Hoover’s formal schooling ended after eighth grade. But, for over a decade, the 28-year-old has been at the forefront of vegetable growing innovation in the Finger Lakes region. He’s also one of the Cornell Vegetable Program’s (CVP) most trusted research and outreach partners. 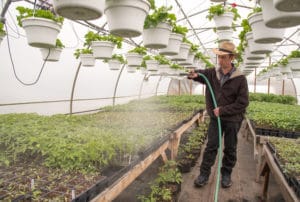 Sitting on just 3.8 acres, Hoover’s tidy five and a half year old farm is just a stones throw from rolling hillside vineyards that overlook Keuka Lake. Pulling into the driveway, visitors are greeted by a modern barn that houses a horse and buggy. Across the driveway, a swing set where his two young daughters play stands next to the entrance of the family home. A pair of cats wander about.
Behind the barn sits the heart of Hoover’s growing operation: a trio of plastic-covered, climate controlled high tunnels. Spanning 30 feet wide and stretching more than 100 feet long, the tunnels along with his two greenhouses lengthen Hoover’s growing season and give him more control over the production process.
“The high tunnel and greenhouse system allows me to do three things,” says Hoover. “The controlled environment helps me optimize yield, have better control of the quality of the fruit, and take advantage of higher market prices generated by early season demand.”

In addition to bringing his own fruit to market, Hoover specializes in starting early-season plants for other commercial growers. This past March, he sold plants to growers from as far away as the Ohio-Kentucky border.

“What’s unique about Nelson’s operation is that he’s a successful wholesale grower operating on just a few acres,” says Judson Reid, a Cornell-trained horticulturalist and CVP Extension Vegetable Specialist. “The high tunnels help minimize his footprint and allow him to get the most bang for his buck through intense crop turnover.” 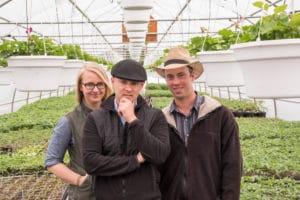 Two of those counties, Yates and Seneca, are home to high concentrations of Old Order communities. Within these communities, Amish and Mennonite vegetable farms have experienced significant growth in both numbers and influence in recent years. They now operate 99 percent of the dairy farms in the area, and a Mennonite-run produce auction is the region’s largest.

Working to maximize vegetable quality and output in Yates and Seneca Counties is Reid, who specializes in small farm operations and high tunnel growing. Over the years, he has become one of the region’s most trusted agriculture education voices–even within those communities typically separate from outside influence.
“Jud is recognized as a resource through his programming and his work getting the state’s produce auctions going,” says Hoover, who estimates he and Reid have known each other for 16 years – back to when Hoover’s father, Howard, began sharing his first high tunnel designs with CCE educators. “Jud’s research and knowledge carry a lot of weight in this community and others. A lot of growers around here factor Jud’s insight into what type of varieties they plant and sell and how they use their high tunnel space.”

Though CVP’s science is respected across the state, Reid recognizes the success of his team’s work ultimately is seeded in the interpersonal relationships cultivated by its educators. “Without earning trust and buy-in from our constituents, CVP’s expertise would be wasted,” says Reid. “By no means do I work exclusively with Old Order farmers; it’s just that in this area they happen to own the majority of vegetable-growing operations. So it’s important I spend time learning their techniques and gauging their results. Our research is a two-way street.”

One of the keys to accessing that street has been Reid’s successful work with Hoover, with whom he conducts two to three research trials a year.

“Nelson’s farm is ideal for researching whether a technique can be implemented on a wider scale,” says Reid. “Because he is such a competent technician and fastidious record-keeper on what grows and sells well, I have real-life data that I can present to other farmers in the region as well as farmer groups throughout the state in the form of educational programming.” 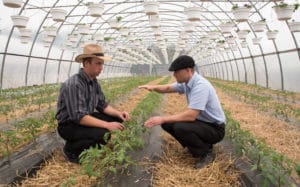 Together, Reid and Hoover have conducted trials in areas such as pest management, disease resistance and crop revenue maximization. A recent project examined optimal practices for growing hanging baskets of flowers in combination with tomato plants.

“That one was very successful,” says Reid. “We measured if the shade created by hanging baskets impacted tomato yield while also collecting data on the overall economic performance of the high tunnel with both crops. We found that hanging baskets at a density of 16 square feet per basket allowed Nelson to maximize the yield of his greenhouse space without limiting yield of his in-ground crop.”

The success of those trials also has mutually benefitted Nelson and CVP. And it’s also helped Reid and his colleagues build credibility with other Old Order farmers.
“By seeing the output that results from our relationship with Nelson, other Mennonite and Amish farmers are more apt to interact with our program to exchange ideas and information,” Reid says. “Forty out of the 41 high tunnels in Yates County are on Old Order farms, so those relationships are extremely important for furthering and sharing our research.”

Reid recognizes, however, that data points alone are not enough to earn buy-in from practitioners of Old Order faiths, and he’s spent years studying the customs and conventions of Amish and Mennonite cultures. Most of his breakthroughs, though, can be traced to a willingness to roll up his sleeves and get his hands dirty.

“Early in my career, I would spend entire days on Amish and Mennonite farms pruning and harvesting tomatoes right alongside the growers like Nelson’s father,” says Reid. “That led to getting invited in for a meal or to sit down for a cup of coffee on the porch and laid the groundwork for more involved interactions down the road. 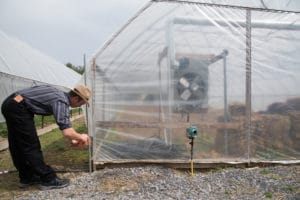 Penn Yan, New York vegetable farmer Nelson Hoover adjusts the height of a sidewall on one of his three high tunnels. The tunnels are frequently used to conduct research trials with Cornell Cooperative Extension educators.

“Over the years, I’ve been fortunate to develop friendships within those communities which has led to getting invited to events such as weddings, funerals and baptisms,” continues Reid. “Accessing those social circles has further allowed me to understand the subtleties of how to move in those communities without offending people. Doing so has yielded some outstanding and important research and fulfilling friendships.”

Like all tunnel growers, Nelson Hoover is focused on expanding and maximizing his spring and fall growing windows. But he also puts a lot of effort into improving the high tunnel soil during the winter. To help facilitate that, he grows winter grains such as barley and triticale.

“Few other growers are doing cover crops in their high tunnels,” says Reid. “It’s another unique aspect of Nelson’s farm.”

For Hoover, cover crops represent a vital step in protecting the indoor soil that supports his livelihood. “Soil care is supremely important to me and cover crops are a big part of that,” he says. “I’ve found that the triticale is good for feeding the biology of the soil, managing its nutrients and the addition of vegetative material improves its physical state.

“Watering it regularly is also key,” Hoover adds. “It’s important to keep the soil moist so that the biology stay active. You have to treat soil as an active as living system. When it gets dry, the biology is turned off—and that’s a very bad thing.”