by Ulf Kintzel
I have been writing articles about sheep farming for a few years now and the feedback I receive often triggers new ideas for new articles. This article is such example. A frequently asked question is what kind of pasture mix I recommend. My standard answer is that I don’t recommend any pasture mix. It seems that all pasture mixes I read about have grass and legume species in the mix that I would not recommend at all. So why pay money for grass and legumes you don’t want? Creating your own pasture mix for sheep grazing is quite simple if you live in an area comparable to mine. I would exclude most grass species that are available like fescue (not liked by sheep), meadow fescue (not enough yield), timothy (not enough yield after the spring growth), and rye grass (too high input required). I wrote a comprehensive article about the “perfect” sheep pasture for “Farming Magazine” and it was reprinted in this publication quite some time ago. It can still be viewed on Small Farm Quarterly’s website as well as on my website. I won’t repeat my experience with various grass and legume species in this article but will focus on the one that has worked for me for so many years now: orchard grass.
Orchard grass is native to Europe, parts of Asia, and parts of Northern Africa. It has been for such a long time naturalized in North America that many people speak of “native” orchard grass when they distinguish between the orchard grass that volunteers (which is called native) and the seed of improved orchard grass varieties. “Native” orchard grass volunteers willingly and easily unless you have fairly wet soils. This story of an old farmer whose business was making and selling hay illustrates well what I am implying: He told me once about a large parcel that he had re-seeded with timothy (which heads out much later than orchard grass and therefore leaves a much bigger window for haying) and he complained about all the orchard grass that is now growing in that same field although he had never seeded any. What bothered him is a delight to me. When we purchased this farm nine years ago I had many parcels, which had been neglected for some years and many plants grew, including bushes but not much valuable or high-yielding grass. Since my sheep liked to graze it anyway l decided to improve the existing sod with legumes, mainly white and red clover, by frost-seeding. Nine years later, I have a thick stand of orchard grass that established itself on its own. I am sure the sheep (which carry seeds in their wool and hair by the thousands) helped quite a bit. Nevertheless, I didn’t have to move a finger, let alone spend money to get there.
Orchard grass in its vegetative state is well liked by sheep. They graze it readily and lots of it. However, it does not take continuous and close grazing. This is no problem at all in a rotational grazing program that includes leaving residual, followed by a rest period of several weeks. If you practice set-stock grazing this grass is not for you. It will disappear in your pasture real quick. In fact, I have not found it in pastures that are continuously and closely grazed. 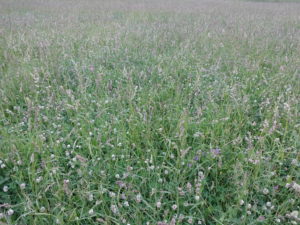 Orchard grass is by far the most desirable grass species in my sheep pasture.

Orchard grass is also relatively high in sugar which means energy. While rye grass is higher in sugar content, orchard grass does not need the same high input and grows well on marginal soils like sandy or gravely soils as long as they are well drained.
Another positive side to orchard grass is its high yield, often despite the fact that little fertilizer has been applied or that the soils are marginal. Yet another upside to orchard grass is its relative drought tolerance. Compared to fescue it is less drought tolerant but compared to all other cool-season grass species that come to my mind it is more drought tolerant.
Some of you may think of orchard grass as this tall and clumpy grass that gets unpalatable real quick when it grows seed heads. That too is orchard grass but it doesn’t have to be that way. I graze my pasture early. And when I say early I mean the moment any green sheen is visible in my pasture. Some say this will reduce total yield of grass throughout the season. However, a field trial in Wisconsin with heifers showed that it does not reduce total annual yield just as long as the grass has enough rest time throughout the growing season in between grazing it. My experience confirms that. This early grazing has one wonderful side effect as far as the development of the seed stems is concerned: it reduces the number seed stems and it also inhibits the growth of them, all in favor of more leafy grass even during the period when seed stems have developed. Of course, there are some patches here and there where the seed stems do get too tall and no leafy grass is left. Bush-hogging right after grazing it takes care of that. After the seed stems are clipped the orchard grass immediately resumes vegetative growth for the rest of the year.
Orchard grass can also be purchased as seed. There are several varieties that head out later, meaning the seed stems are developing later in comparison to native orchard grass. The difference is quite significant. Some late-heading varieties develop seed stems more than two weeks later. This keeps the orchard grass far longer in a vegetative state. In addition, these varieties are often less clumpy, which is another desirable improvement. The two varieties that I have tried are Baraula, the latest heading variety from Barenbrug, and Athos, a late-heading variety developed in Europe. Both varieties have been perfect for my sheep pasture. In fact, when I dream up a newly seeded sheep pasture I think of a blend of the latest late-heading orchard grass varieties as the grass species in it.
So how does that all translate into an answer for the question for what pasture mix I recommend? Simple: Prepare your seed bed, seed your late-heading orchard grass, then spread your legume of choice on top and run your cultipacker over it for good soil contact. (You can also frost-seed your legume at a later time if it is clover.) This way you already have a much better pasture than from a pasture mix with species that will either disappear a few years later or are not liked by sheep or are not yielding much. If you wish to fill in some blank spots you might want to add some improved blue grass but bluegrass is likely to volunteer later on anyway. So, what legume do I recommend? Ah, I just thought of a topic for a new article. Stay tuned.
Ulf owns and operates White Clover Sheep Farm and breeds and raises grass-fed White Dorper sheep and Kiko goats without any grain feeding and offers breeding stock suitable for grazing. He is a native of Germany and lives in the US since 1995. He farms in the Finger Lakes area in upstate New York. His website address is www.whitecloversheepfarm.com. He can be reached by e-mail at ulf@whitecloversheepfarm.com or by phone at 585-554-3313.