Home » Posts » No Till, Permanent Beds for Organic Vegetables

No Till, Permanent Beds for Organic Vegetables

Four Winds Farm mulches with compost to suppress weeds and improve their soil.

by Brian Caldwell & Ryan Maher
Jay and Polly Armour bought a rundown farm in 1988, with the idea of growing organic vegetables for sale.  Their first production garden was an old horse paddock, which had been trodden down for many years.  After the ground dried out in summer, it became packed and oppressively hard to work.  Cultivating by hand was a literal pain in the back.  After a few years, something needed to change. 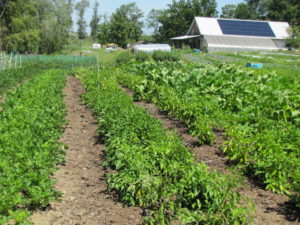 At a winter meeting on the topic of reducing tillage in vegetable production, their neighbor and expert horticulturalist Lee Reich said, “why till at all?  Mulch the soil and let it suppress the weeds!”  Lee figured that according to university research, an inch of compost would supply the necessary nitrogen for heavy-feeding vegetables.  By happy coincidence, most weed seeds germinate only in the top inch of soil.  Thus, the idea was that an inch layer of weed-free compost mulch would prevent most weeds from even emerging.  It would be best to skip tillage altogether, since that just brought up more weed seeds.  Lee had done this in his own garden.  Though skeptical, Jay and Polly were willing to give it a try.
In 1995, their first no till/mulch season, there were indeed fewer weeds.  Even better, the soil stayed soft and it was easy to hoe or pull the ones that grew.  They were hooked.  They had an abundant source of compost, free for the taking, and worked a manageable area, so the approach was feasible.  They continued to add no-till mulched fields through the 1999 season, and now manage about 4 acres of no-till vegetables on their 24 acre certified organic farm located outside Gardiner, NY.
Here is how they do it:
The fields are laid out with permanent beds.  There is no foot or tractor traffic on the planting beds and beds are maintained in place from year to year. Bed size is based on the tractor, used for hauling compost which has a 55” wheel base.  Beds are about 3’ wide, with an 18-24” path between, and 100 feet long.  There is no deep tillage and weed control impacts only the soil surface.
Managing weeds is a major reason for tillage on most organic farms.  What Jay and Polly have found is that by removing weeds before they set viable seed and mulching with weed-free compost, weed pressure has gone way down.  Weeds are managed with wheel- and stirrup- hoes during the season, and pulled by hand when necessary.  The friable surface layer is easy to work, and it is easy to pull whole weeds up. They are removed from the fields and composted.  Pathways between beds are kept clear of weeds using a wheel hoe. Dandelion has emerged as the biggest problem weed. 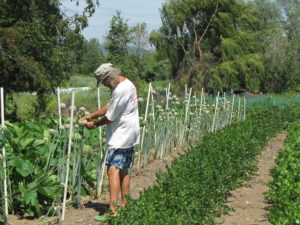 Quackgrass and other perennial weeds may encroach from the field borders.  Jay has found a remarkable way to keep them out.  Comfrey is established by planting roots around the borders of each field.  They grow vigorously and keep the perennial weeds out.  Jay simply stomps their leaves out toward the grass a few times a season, mulching the soil and stimulating new growth.  It is important to reduce any perennial weeds to a minimum before starting their system, and to repeatedly dig and remove any that come into the beds.
Compost mulch can be applied either in fall or spring but they find more time for this in the fall.  Four Winds does it with a front end loader, with employees shoveling and spreading it evenly over the beds.  There are two full-time employees who help with the farm work.  Transplanting is done by hand, often with close spacing.  Crop residues are cut or pulled after harvest and removed to be composted.  Many beds are double-cropped, for instance by following peas with carrots.
Access to enough weed-free compost is key. Their free source of compost dried up, so now they make their own.  They have a small beef herd and use manure from it and a nearby horse farm as the base mix.  Crop wastes and residues are added as well.  It is critical to produce weed-free compost.  Jay used to turn long piles with the front end loader on his tractor, but in 2014 built a blower system which forces air under the pile and allows the manure to compost in a static system.  The outside of the pile is covered with a layer of previously-made compost to help hold heat in, as high temperatures are critical to killing any weed seed.  After heating and cooling down, piles are moved and covered with a tarp.  A large amount of compost, a rate of about 70 tons per acre, is needed to mulch beds to a level of about an inch and a half each year.  In recent years, Four Winds has also hosted a local organization that collects materials such as food wastes and makes compost on their site.  In exchange, they receive half of the finished compost.
Jay and Polly also share their expertise and land in another way.  About a quarter of their vegetable land is managed by Second Wind Farm, a CSA run by Allison Patrick and Alison Fletcher who cooperate with Four Winds, using the same methods and facilities.  Second Wind was started in 2009 and former manager Erin Enouen now has her own farm.  Second Wind Farm provides a setting in which prospective new farmers can learn work and management skills that serve them well when they move to their own land.  Its fields are rotated with the others, providing enough land for a sound rotation which helps suppress pests and diseases.  Four Winds specializes in tomatoes and potatoes, both of which need a three year rest before returning to a given field.
Tomatoes are at the heart of the farm. If compost is running low, tomatoes get priority. They are trellised and also mulched with straw on top of the compost, to help reduce early blight. In spite of the cooling effects of the straw compared to more typical black plastic mulch, the fruit ripens with that of other neighboring farms.  Jay prefers oat straw, as it is finer and easier to work with, and has found a good clean source. He takes pride in the quality and diversity of the tomatoes coming off the farm, and experiments with new varieties. All crop residues are pulled out for composting and straw gets raked out to help control pathway weeds for the next year’s crop.  Four Winds’ tomatoes take center stage at three farmers markets in the Hudson Valley. 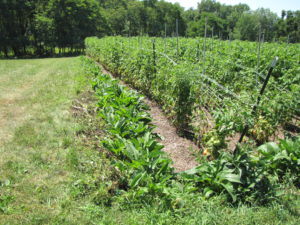 Comfrey on field edges to keep out perennial weeds. Photo by Brian Caldwell.

When preparing for small seeded crops, preceding crop residues are pulled out by hand and the bed is scuffle hoed ahead of planting. Because of the low weed pressure in this system, Jay and Polly successfully grow direct seeded onions and leeks.  They plant in late March or April, and harvest mature onions in early August.  Most organic growers use transplants to give onions a head start, partly because weed control is a major issue.  This year, because of dry weather, onion stands were spotty, in spite of irrigation. Jay grows his own onion seed, finding that it performs much better than purchased seed.  He also saves seed from some peppers and tomatoes.
Row covers are used extensively for pest management.  Blueberries (netted) and raspberries are major crops as well.  In 2000 they built a new barn for handling and packing.  In its basement, two coolers set at different temperatures were dug into the ground.  Solar panels provide all the farm’s electricity, and a compost-heated greenhouse on the south side grows transplants and crops. Drip irrigation from a well is used on tomatoes and other transplanted and established direct seeded crops.  Small sprinklers are used to establish small seeded crops in the compost-rich surface soil.
Jay is experimenting with cover crops but so far they are not heavily used.  Dealing with their heavy residues is a problem.  Jay is also concerned about weed problems he has seen on other farms where roll-down rye was used as a mulch.
Questions remain about the sustainability of this growing method if it were widely adopted.  The amount of compost (and thus manure) needed is high, especially when starting out.  If manure were considered valuable instead of a waste product, the cost of compost mulch might be prohibitive.  Also, more nutrients are contained in the compost than the crops remove, which can lead to nutrient build up in the soil over time.  Recent Four Winds soil tests showed very high levels of phosphorus in their fields; but soil organic matter and some other nutrients were typical of well-managed fields.  Sodium and soluble salt levels, indicators of over-application of manure, were very low.
Meanwhile, Jay is glad that at least by Four Winds’ example, small scale organic vegetable production can successfully support a family and provide delicious food to hundreds of customers. His advice to new farmers?  “Give it a try.  You can make a living farming!”
Brian Caldwell and Ryan Maher are Research/Extension Support Specialists with Cornell University in Ithaca, NY. They can be reached at bac11@cornell.edu and rmm325@cornell.edu respectively.  Jay Armour can be reached at Four Winds Farm, 158 Marabac Rd., Gardiner, NY 12525.