Conventional Tillage on the Small Farm

by Rich Taber
“The plow is the symbol of labor and tillage of the soil’, and is an often recited line from the opening ceremony of the FFA (Future Farmers of America).  Throughout mankind’s history, people slowly transformed from hunting cultures, then to hunting-gathering, and then to farming. Since the dawn of the age of farming, the soil has been tilled to prepare it for the planting and harvesting of crops. Tillage mimics an ecological disturbance, such as a weather calamity which makes bare the soil. In a quest for more consistent results, tillage and its implements were invented.  The plow is one of the most iconic images in the mind of the American public, when it comes to agriculture. For thousands of years, the soil has been turned over in the springtime. 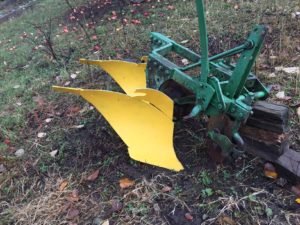 One of the author’s two bottom plows with coulters to slice through the soil.

Nowadays there are several forms of tillage and cropping systems. In this article, I focus on what is known as “conventional tillage”, or more simply, the type of tillage as it has been practiced for hundreds of years. Conventional tillage usually consists of primary tillage, or plowing, and secondary tillage, which is normally done by disking with harrows and maybe a third step with spring tooth harrows. If seeding a forage or pasture crop, the soil can finally be firmed with a roller, or cultipacker. Conventional tillage has been used extensively by livestock as well as horticultural operations for years. I direct my comments to those farmers who have smaller tractors available, and with working three point hitches. Larger implements and tractors typically have hydraulic systems to raise and lower the implements as well.  Additionally, horse drawn tillage implements are very similar to small tractor drawn implements and while smaller, accomplish much the same as their engine powered brethren.
Other forms of tillage have been developed in recent years, such as no-till, reduced till, and the partial replacement of moldboard plows with chisel plows.  All forms of tillage have their appropriate times and places to be used. I would never suggest that conventional tillage should be practiced endlessly, year after year, on the same plot of land. Why is that? 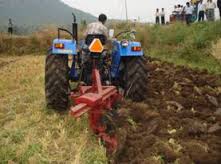 I fully understand that conventional tillage has come under fire is recent years; it certainly has its issues. Conventional tillage can indeed harm the soil if it is done recklessly, or when conditions are too wet, or land is too steep, all the while contributing to soil and water erosion, compacted soils, and certainly uses of a lot of fossil fuel energy.
However, even with all of the potential ills of conventional tillage, it certainly has appropriate times and places that it can be used; just not mindlessly year after year in the same location. And, for the new and beginning farmer, it can be gotten into fairly inexpensively. One only has to attend one of the many innumerable farm equipment auctions which sprout up all over the landscape to find a plethora of small, inexpensive tillage implements for sale. You can purchase good used plows, disk harrows, spring tooth harrows, and cultipackers for only a few hundred dollars each. You also do not suffer as many risks buying such implements at an auction, compared to something that has an engine on it, as it is hard to camouflage major flaws in small tillage implements.
I always need to mention farm safety.  Hitching and unhitching three point hitch implements can be awkward, and possibly hazardous, especially with older tractors. Always have the correct hitch hardware for attachments and sway bars installed on the three point hitch as well.  This will keep implements from flopping and whipping back and forth.  Be careful! 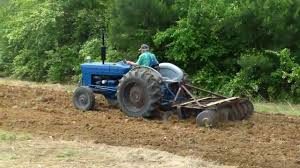 Now, I will to explain the different stages of tillage. Step one is primary tillage and is the first step in the tillage process, and is normally done with a moldboard plow. This step inverts the soil and exposes it to the surface, kind of like hitting the reset button on that plot for the year. Moldboard plows have “bottoms”, or moldboards. The typical small farm tractor can pull one, two, or three bottoms.  In the wake of the soil being turned over is what is known as a “dead furrow”, or the part of the soil several inches deeper. You have to learn how to plow so that you don’t leave dead furrow in the wrong places, or you can be haunted for years with teeth jarring small ditches in your field that you bounce over with your machinery.
The second step in tillage is “secondary tillage”, and is done with small disk harrows. Typically you go over the field a couple of times to smooth out all of the mounds created by your moldboards from plowing.  A further refinement is to use a spring tooth harrow, to even further smooth out your seedbed. The colloquial name for such a harrow is a “drag”.   Three point hitch ones operate much easier than ones that you simply hitch to your drawbar, but cannot lift into the air.  A three point hitch drag will allow you to lift the machine and clear it of debris, which you cannot do with just one hitched to the drawbar.  This can be a real “drag”! 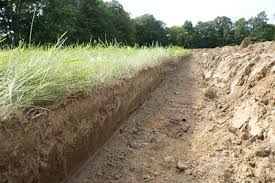 The dreaded dead furrow that needs to be either disked away or place on the outer edges of the field.

Finally, and especially if you are doing a pasture or hayfield seeding, you will need to smooth the soil surface with a cultipacker or some sort of roller. This may be done either before, or after the seeding, and sometimes both, depending of the conditions.  Some planters, such as seeding drills and grain drills will have packers already attached to the machine. If not, then a pull behind cultipacker will help to firm the soil.
One other step in the tillage process is the dreaded “rock picking, or picking stones” phase, typically done after disking or dragging. I grew up in Eastern Connecticut, and I oftentimes joke that we didn’t have rocky soils in Connecticut; we had “soily rocks”. Many towns in New York State were named after towns in Connecticut, as farmers moved west to find better, and I conjecture, less stony land. The removal of stones and rocks from the tillage process    absolutely must be done, with most of the larger stones removed from the field so as not to interfere with machinery later on.  Growing up, it seemed to me that those people who are the lowest on the farm’s totem pole hierarchy got relegated to stone picking the most often.
To reiterate, conventional tillage is certainly not the end all, or only way of tilling the soil; but it does have its place. Happy tilling!
Rich Taber is the Grazing, Forestry, and Ag Economic Development Specialist with Cornell Cooperative Extension of Chenango County. He also lives on a 165 acre farm in Madison County that he picks stones from, and that he runs with his wife Wendy, where they raise beef cattle, sheep, laying hens, heritage turkeys, and do rotational grazing. He can be reached at 607-334-5841 ext. 21 or email: rbt44@cornell.edu.