PV systems and trackers are common throughout Vermont

McKnight Farm, an organic dairy that milks more than 200 cows and sells beef, requires a lot of electricity to make compressors, refrigeration, water pumping, and ventilation systems work. To eliminate this significant recurring expense, owner Seth Gardner invested in a solar photovoltaic project that would meet all of his farm’s electricity needs.

Solar photovoltaics, also called panels or PV for short, are made of a semiconductor material that directly turns the photons in sunlight into electricity. A complete solar PV system consists of four things: solar panels, a way to mount the solar panels (either on a roof or on the ground), the electronic conversion equipment (i.e., an inverter), and the electrical synchronizing and safety equipment to connect the electricity to the utility’s network. With well over 2,000 installations, solar PV is far and away the most common type of renewable energy installation in Vermont. Farmers have two ways to be compensated for their solar PV systems: the Sustainably Priced Energy Development (SPEED) Program and net metering.

Vermont SPEED
Although solar PV systems are the most common type of renewable energy installation in Vermont, they only account for 4-5% (> 40 megawatts) of the installed capacity of all renewable electricity systems. This is rapidly changing, however, as Vermont SPEED incentives for solar PV projects—$0.257 per kilowatt-hour for 25 years—have triggered a wave of “solar farms,” including 21.4 megawatts (MW) of SPEED-approved projects on 10 solar farms in 2013 alone—with another 40 MW in applications that did not receive approval. Since dairy farms have about 60% of the total cropland in Vermont, many farmers are investigating larger solar PV systems on a portion of their land.

Net Metering
Although SPEED does allow projects of 150 kilowatts or lower, as a practical matter most SPEED solar projects are rated at over 2 MW. Farmers can pursue small and medium-sized projects via net metering. A net metered project means that the renewable electricity generated by the consumer is applied as a credit—capped at $0.20 per kilowatt-hour—to offset electricity that would normally be purchased from the utility. Electricity generation in excess of the consumer’s use during a billing period is credited to their account for future use. Solar energy generators in Green Mountain Power territory can receive an additional $0.06 credit per kilowatt-hour.

Gardner began planning his solar PV project for offsetting his farm’s electricity use in spring 2012, and received a certificate of public good from the Public Service Board in September 2012. McKnight Farm benefitted from something that’s uncommon in most states: “group” net metering. Group net metering allows energy generators to share their credits across multiple meters at the farm, or they can be set up by a group of neighbors or relatives to share the production of a single system. The only requirement is that all the group beneficiaries are in the same utility service area. 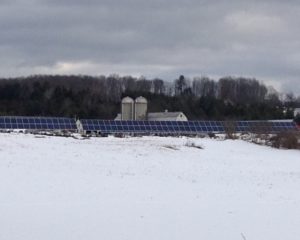 McKnight Farm solar array in East Montpelier, showing about one quarter of the 1.5-acre array, which is rated at approximately 95 kilowatts power output. The system was built by Catamount Solar.
Credit: Catamount Solar

Siting Considerations
In some instances, a barn roof is perfect for solar PV if there is enough space, a south-facing orientation, and a strong enough structure. Ground-mounted systems are increasingly common and are generally of two types: trackers or fixed racks. Trackers (e.g., AllSun Trackers) are poles that support a set of panels and a mechanism that continually moves the panels to point directly at the sun during the course of a day. Fixed racks consist of steel posts driven into the ground, forming fixed rows of panels angled at 30 degrees and generally facing due south. The choice between trackers and fixed racks is context-specific. For example, trackers generate more electricity, especially later in the day, but generally require more land and may cost more. Farmers should weigh cost, conversion efficiency, land access, geographical factors (e.g., soil type), and other concerns when making a decision. To date, all SPEED projects except the South Burlington Solar Farm are fixed rack systems, but hundreds of net metered trackers are also generating electricity across Vermont.

Working with Catamount Solar, Gardner chose a site with good access to the sun and that was already maintained as a buffer between organically managed acreage and the adjoining conventional acreage. Gardner chose a fixed rack ground-mounted system because fixed racks are simpler and lower cost than trackers. To have enough area of solar panels to be able to generate the equivalent of his farm’s total annual electricity usage required 1.5 acres of land for 416 panels. Because the site selected had very thin soil cover—with ledge only inches below ground—Catamount and Gardner chose to pour concrete blocks and mount the racks with the panels by drilling into the concrete. All of this work was completed between early November and the end of December.

To pay for this project, Gardner received a $255,000 loan from VEDA’s agricultural loan organization, the Vermont Agricultural Credit Corporation and a $36,000 rebate from the State of Vermont. The system is also eligible for a $85,620 federal tax credit. According to Catamount, the system is expected to produce about 120,000 kWh annually, valued at $25,200. Including the tax credits and depreciation value, the system payback is expected to be 6 years. Most of the electricity generated is allocated to the meter for the milking barn, with about 20% going to the freestall area, and the rest to the house.

Producing Food and Energy
Whether using trackers or fixed racks, it is possible to use the area around the panels for farming if you plan ahead. For cropping or hay, consider the spacing and height necessary to run your planting and harvesting equipment. For pasture, consider the strength of the poles when livestock might rub against them, and consider the necessary height to avoid damage from grazing sheep, cows, horses, or other livestock.