Home » Posts » Aquidneck Island: A Food System in the Making

Aquidneck Island: A Food System in the Making

By Rory Hennessey
On December 10, 1980, six years after travelling across the country as a Regional Manager for steakhouse chain Victoria Station, (the offspring of a Cornell University Hotel School graduate project) Ralph Plumb (Cornell Class of 1974) and his wife Pat opened the doors of the Brick Alley Pub in Newport, Rhode Island. Having curated a list of favorite recipes from their cross-country travels, Brick Alley’s menu offered a broad selection of American drink and cuisine to a corner of New England that did not know what it was missing. Heaping plates of Cheesey Nachos paired with Frozen Mudslides quickly led to the Brick becoming a local favorite. 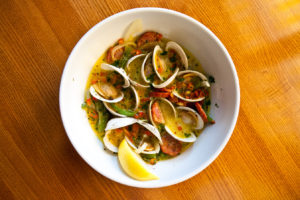 Thirty-four years later and with “Newport Landmark” status, Ralph still crafts the offerings and recipes for Brick Alley Pub’s menu, but he now does so with the help of his son and Brick Alley manager, Matt. Having grown up in the family business, Matt has spent his life first watching, now helping his parents do everything from washing the floors to negotiating prices with food vendors to creating new menu offerings (Pork Belly Tacos & Sriracha Fish Sauce Wings have been two recent hits).
While Ralph made his mark by bringing a collection of national recipes to the City by the Sea, Matt sees his opportunity in finding ways to offer these same dishes using local ingredients, creating a new community-based food system in the process.
Focusing on partnerships with local and regional producers, Matt began constructing his own local network. As Green Mountain College professor Philip Ackerman-Leist’s describes, “…food systems…requires us to broker new relationships – relationships that help build local economies, conserve local landscapes, create entrepreneurial collaborations, enhance food security, enlighten and educate…”  Using this as his framework, Matt set to work establishing a viable community-based food system model that continues to be tested and honed.
Building Local Economies
Every region has its own mix of individuals, groups, and businesses that give character to the community, but far too often they operate independently of one another. Newport is no different. Located on Aquidneck Island, a 15 x 5 miles-long island in Narragansett Bay, Newport has a unique collection of food-based enterprises. Yet despite the small size of its community there exists an oft-too-fragmented network.
When looking at the menu, seafood was a natural starting point. Matt set to work creating relationships with the network of individual fishermen who normally sell their catches to the much larger national food suppliers. Working with groups like Trace and Trust introduced Matt to an entire network of fishermen catching fresh seafood right off the shores of Rhode Island. Items like the best-selling Rhode Island-style Calamari (lightly fried with banana peppers and a side of marinara or tartar) or summer swordfish could now be sustainably sourced from nearby Point Judith or Block Island. Then there are the seasonal catches of fluke and striped bass that are able to be run as specials. These connections work both ways, as the fishermen can go out at night assured that come morning, they will have a buyer, while Brick Alley gets the ability to offer fresh seasonal specials that the community loves.
In addition to seafood, Brick Alley Pub now incorporates seasonal cheese selections from local Simmons Farm.  Grass fed beef from Aquidneck Farms, located on 400 acres of prime agricultural land with 180 head of closed Angus herd, is regularly featured on Beer and Wine Dinner Menus. Matt sources local Aquidneck Honey from the network of over one thousand bee hives tended to by Aquidneck Island resident ‘Jeff the Bee Man’. Jeff  bottles the honey used at Brick Alley and also makes and sells a number of honey-based treats.
On the drink side of things, visitors looking for a taste of local flavor will find local wines from both Newport Vineyards (the largest grower of wine grapes in New England) and Greenvale Vineyards. The tap features plenty of choices from Newport Storm Brewery, an 8,000 square-foot facility that brews a variety of beers right down the street from Brick Alley.
Closing the circle, there are partnerships that kick in for clean up and sustainability. After the french fries are enjoyed, Brick Alley calls its partner Newport Biodiesel, a neighborhood company who collects waste vegetable oil, converts to biodiesel, and then distributes to homes and business throughout the state. As for the food scraps, all of the plates are scraped into special bins while the kitchen consolidates all of the food waste. These bins are then picked up once a week, taken to local Garman Farms where it is composted and used as organic fertilizer for produce Brick Alley later purchases.
Conserving Local Landscapes
Ensuring Newport’s natural landscape is preserved is carried out in part by the Aquidneck Land Trust (ALT). This non-profit organization is run by a dedicated group of local residents working to save the natural character, environmental health, and economic value of Aquidneck Island. As of today, ALT is responsible for over 2,000 conserved acres, a portion of which are reserved for small farms like Brick Alley’s composting partner Garman Farms as well as Brick Alley-affiliated ROMA Neighborhood Farms.
Creating Entrepreneurial Collaborations
As of late, entrepreneurs have proven to be the lifeblood of local communities with farmers proudly being counted in their ranks. “Community Food Enterprises” (CFE) are businesses that are locally owned, employ locals, and use mostly local goods and services. Recent evidence shows that CFEs generate more jobs – two to four times the amount per dollar of sales – and generate more income and wealth for (their) communities than non-locally owned businesses, even ones that source goods from the area. 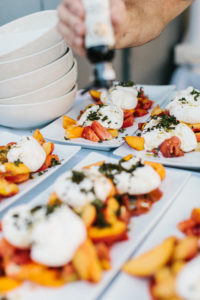 With this in mind, Matt decided to begin his own farm as a way to connect with the community in a new way while also helping shorten the “food mileage” of a portion of Brick Alley’s sourced produce. With the help of his friend Rory Hennessey, the two began to cultivate an acre of land, growing the essentials as ROMA Neighborhood Farms. Within two years, ROMA has secured an additional acre of land thanks to the Aquidneck Land Trust, hired a handful of part-time college students, implemented a CSA program, and set up shop at local farmer’s markets. Additionally, the Brick Alley Pub/ROMA Farms combination also recently collaborated with Young Family Farm in Little Compton, Rhode Island to host a unique Dinner on the Farm experience. Showcasing fruits and vegetables grown on the two farms with meat and fish from around Aquidneck Island, Matt and the team from Brick Alley moved the kitchen to the farm treating the community to a sold-out 10-course event.
However, to be a successful system, these collaborations have to extend beyond just local food. Recognizing the value of the “shop local”/CFE movements Matt also created the first annual Holiday Pop-Up at the Pub event which featured local entrepreneurs, craftsmen, and of course, farmers. Held in December, the Pop-Up allowed the community to purchase locally made art, jewelry, soaps, food and more to give as gifts during the holiday season. After a great inaugural reception, the Pop-Up will hopefully become an annual local event in Newport.
Enlighten & Educate
Working to educate the community is a multi-faceted, ongoing undertaking. Ensuring the community is aware of local farms and businesses along with the benefits of supporting – from both an individual and communal health standpoint – is no small task. To help in this, Matt and Rory have been able to build sizeable followings on social media, leveraging these platforms’ broad reach to share and promote local news and events.
Another essential educational element lies in sharing the behind-the-scenes workings of “local food,” explaining the “why’s” and “how’s” to the hungry minds who will soon be responsible for implementing. For this reason, Matt also volunteers his time at a number of schools on Aquidneck Island, teaching classes on topics like meal preparation, how to eat healthy, “start-up farm” overviews, and general business lectures.
The Path Ahead
Creating, connecting, and implementing the infrastructure for a completely integrated food system is an endeavor that will take time and dedication. At first blush, incorporating the above systems, processes, and ventures might seem to make intuitive sense for a restaurant owner. But it takes a considerable amount of effort. Each relationship not only has to to be created but then must be actively maintained. It is far easier, and in most cases more efficient, to work with one or two suppliers when sourcing a business’s inventory. The national companies have consistent inventory with automated re-ordering systems and forces of salesmen ready and willing to assist, all luxuries that working with individual farmers and local businesses do not afford you.
However, making such a commitment is non-negotiable as ‘local food” production is one of the top environmental and social issues facing us today. Places like Newport and businesses like Brick Alley Pub are far from perfect, but as a culture we have to understand the overarching implications of our actions. We must be willing to make those seemingly tiny adjustments with the foresight of their adding up to a sizeable sum. Echoing Cornell’s Tom Lyson we must recognize agriculture and food endeavors as engines of local economic development, integrally related to the social and cultural fabric of the community . The sooner, the better.
Rory Hennessey co-manages ROMA Neighborhood Farms located on Aquidneck Island. She can be reached at rory.hennessey@gmail.com.