Home » Posts » Ovines in the Vines?

A New Idea for the Finger Lakes Region of New York

Grazing sheep in vineyards has been an idea we have tossed around for a while. This spring Hans Walter-Peterson and Mike Colizzi with the Finger Lakes Grape Program and I sat down to actually talk about it. This practice is done on the West Coast with baby doll sheep, but none of us has ever heard of it in the Finger Lakes region or New York. We had an interesting discussion mingling grape and grass lingo.
Since this was a new idea to the region, we needed a guinea pig vineyard to test the idea. It needed to be someone that had their vineyard fenced in, or partially fenced and lots of temporary fencing. The next step was locating someone that had sheep, ideally with no lambs, to keep it simple. 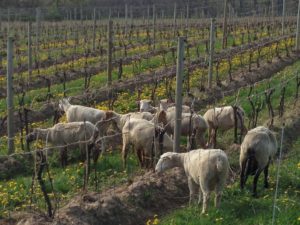 Sheep grazing in the vineyard

Mike volunteered his own vineyard, Kashong Glen Vineyards in Bellona, Yates County. He has energized deer fence on three sides with temporary fence along the road. The sheep came from some of his wife’s aunt flock. They were a group of ten ewes that had lambed early for Easter. Water tubs were set out on the headlands near the road for easy filling.
The ideal time to start spring grazing of sheep in the vineyards is prior to bud break. We had concerns about the sheep biting off the tender buds and leaves, especially after the hard winter we had just finished. The vines couldn’t withstand any further damage from bud loss. I had estimated there was plenty of ‘pasture’ available for the ewes for more than a month on the small acreage. We were hesitant to get too many sheep since we didn’t know if they would destroy the vines.
The sheep were delivered to the vineyard on Mother’s Day. The ewes hit the ground running since it was their first opportunity to get out on pasture this spring. Pastures had gotten off to a slow start so moving them to the vineyard was a great opportunity. Mike was hoping the ewes would graze in some targeted areas – the areas at the base of the vines, and the grassy rows in between the rows of vines, thus reducing the need for mowing. Plant growth at the vine bases can compete for water in dry years. There were some weeds but since they were flush with spring growth it was very palatable. Mike spent quite a bit of time watching the sheep that first day making sure they weren’t destructive. 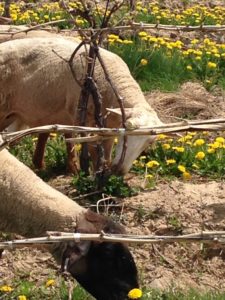 Sheep grazing weeds at the bases of the grape vines

Some work has been done to train sheep to graze vineyard floors and not grape leaves. To deter sheep from grazing the grape leaves, they were fed grape leaves then administered a small dose of lithium chloride. The sheep got a bit of an upset stomach and associated the discomfort with the grape leaves. We couldn’t start with that practice since the vines hadn’t yet leafed out and the sheep might possibly be used for leaf pull later in the season. This practice removes a few leaves in the grape zone to allow for more air circulation. This can help reduce disease risk.
The sheep had a short stay within the vines. Bud break occurred quickly with the warm temperatures in mid-May. They were moved to the headlands where there was plenty of grazing for a few weeks. The goal is to put them back in the vineyard possibly after harvest to graze the grassy areas down before winter.
Nancy Glazier is the Small Farms Specialist with Cornell Cooperative Extension’s Northwest New York Dairy, Livestock and Field Crops Team. Her office is in Penn Yan and can be reached at 585.536.5123 and nig3@cornell.edu.