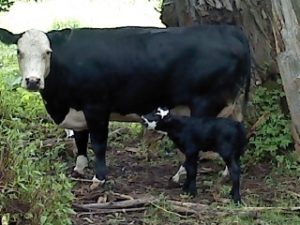 The Winklers sell 35 head of beef per year

With its rich loamy soil, plentiful water, and flat basin land, it’s unsurprising that Stephen Winkler and his family settled down in Jefferson County, New York. The Winklers purchased the original 100 acres, house, and barn of what would soon become Lucki 7 Farms in 1997, becoming the third family to farm the land. Their primary predecessor, the Gates family, was well known for their generosity with land and resources and their dedication to employing local farmers. Each Gates property had beautiful rustic farmhouses, several of which the Winklers have refurbished since purchasing the land.
The Winkler family started off from much humbler beginnings than their forebearers. The Winklers began with a single flock of laying hens to sustain the homestead, but in the years to come they would build the foundation for a multi-species livestock farm, adding pigs, chickens, turkeys, and beef cows. 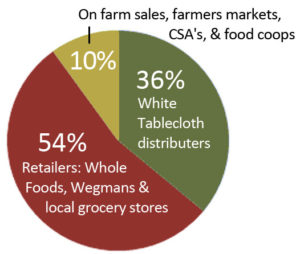 In 2000, Lucki 7 Farms began selling to neighbors and through local farmers markets, grossing a little over $20,000 annually. The Winkler family purchased another farm the same year, adding 220 acres to their property and enabling them to keep up with the heightened demand for their products.
Then, in the mid-2000s, Stephen Winkler says consumers began to desire “farm products with a story and closer to their home.” The rising demand for locally produced food enabled Lucki 7 Farms to start selling to white tablecloth distributors in 2007. Soon after, they expanded their market channels to include direct marketing to retailers. They sold their first livestock to Whole Foods in 2008 and began selling to Wegmans just two years later.

Breakdown of the Winklers’ Expenditures

Today Lucki 7 Farms is a full-time enterprise that grosses over $1.5 million. The Winkler family currently owns 320 acres and hopes to purchase another 280 acres, effectively doubling the size of their farm. Annually, the farm now sells 800-1000 hogs, 35 head of beef, 700 meat chickens, and 7000 dozen eggs a year and Stephen now has plans to expand into high tunnels for vegetable production. To accommodate these livestock additions, the Winklers have built 2 sustainable hog farms and a laying farm for hens. The family aims to build their own beef facility in the near future. Although the Winkler family has shifted from using local chop shops to USDA processors for the majority of their meat cutting needs, they still use local feed dealers, local equipment dealers, and even a local trucking service based out of Ithaca, NY called Regional Access. See the sidebar for a full list of Stephen’s local expenditures.
Stephen Winkler would still consider Lucki 7 Farms a small livestock farm because, in his words, “if we use only dollar amounts to define the size of farms it is misleading.” Lucki 7 Farms, despite the huge success that it has seen, is still owned and primarily operated by Stephen, his wife Lisa, and their five children. Lucki 7 Farms is a family farm that uses local inputs to feed a regional community which, to Stephen, is what really defines a small farm.

For information on Lucki 7 Farms, visit their website: http://www.lucki7livestock.com/
Rachel Whiteheart was a student intern with the Cornell Small Farms Program from 2012 – 2014. She recently graduated with an environmental engineering degree.