Gordon Waite, a man with a friendly demeanor and steady smile, manages twenty Herefords on his 67-acre farm situated in Granville, Vermont. Gordon cannot picture himself doing anything besides farming. “I love farming, and I love my animals,” Gordon proudly announced, an honest statement he demonstrated by calling each of his cows from a distance by name. 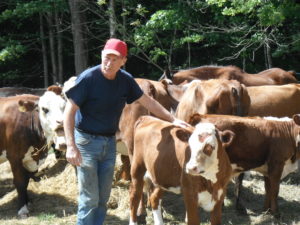 Gordon maintains his cheerful attitude because he enjoys caring for his animals’ health and welfare, despite the constant concern of coyotes, foxes, and dealing with seventeen expectant mothers. Gordon currently is looking after fifty newly hatched chickens and helping his daughter succeed in the egg business, a true family collaboration. Gordon hopes to grow his herd up to thirty brood cows in the future, but wants to continue as a small farm because he feels his animals deserve personal attention.

Gordon started his first conservation work in 2011 and was a voluntary participant in the Farm Service Agency’s (FSA) Conservation Reserve Enhancement Program (CREP). The program focuses on improving water quality through vegetative buffers, such as a riparian forest buffer, which Gordon now has on his property. The program is also able to provide up to 90% of the cost of the project and annual rental payments for fifteen years (this can vary by State) on the CREP land that is no longer available for grazing. Kate Teale, with the Natural Resource Conservation Service (NRCS), provided Gordon technical assistance, including development of a planting plan, and follow-up with field checks of the planting.

The main objective of Gordon’s project was to protect water quality in the White River through the establishment of a riparian forest buffer. The White River spans 60 miles in the state of Vermont and is a tributary to the Connecticut River. The riparian forest buffer planted on Gordon’s property includes several species of native trees and shrubs, which when fully grown will span a fifty-foot area between the river and grazing area. This buffer will greatly improve water quality by preventing streambank erosion and providing a new habitat for birds and small mammals.NRCS and FSA were not alone in this project; The White River Partnership and US Fish and Wildlife Service proved to be valuable partners in this endeavor. 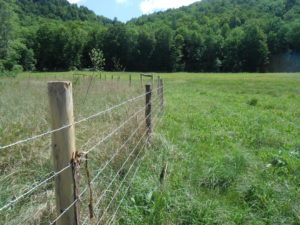 The White River Partnership had previously assisted Gordon on a river corridor easement project, which they believed would greatly benefit from a riparian forest buffer. As part of the CREP project the White River Partnership organized the labor to plant the buffer. This arrangement reduced the cost of the project and allowed for community involvement. Students from Vermont Technical College, Rochester High School,and Stockbridge Elementary School were all given the opportunity to get outside and assist in planting. The White River Partnership had worked on similar planting projects in the local area and the knowledge they shared was useful to Kate Teale when she was formulating the planting plan. All of the trees were ordered from local nurseries, which gave them a higher potential for success and kept all of the money local.

The United States Fish and Wildlife Service (USFWS) worked as a cost-share partner for the additional 10 percent of the cost that the CREP program did not cover. USFWS assisted in payments on the fencing that would ultimately protect 3,500 feet of the stream bank and 4.4 acres of riparian habitat. This fencing would also help protect the aquatic life in the river, most notably the trout. Gordon installed all of the fencing himself, with some assistance from his nephew. He is excited to see how the new buffer will work to protect his grazing land from flood damage. Gordon is especially sensitive to flooding after Tropical Storm Irene, which damaged his property.

Gordon truly enjoyed working with all of the different agencies that were involved in his project. Gordon would absolutely recommend this program and was grateful for the help from all of the “good people at the NRCS.” Gordon has volunteered his farm to be used by the USFWS as a long-term monitoring location. The USFWS will monitor the effects the buffer has on bird populations and the overall success of tree and shrub growth. This project highlights the collaboration between FSA, USFWS, NRCS, The White River Partnership, and farmer, Gordon Waite, for water quality and wildlife habitat enhancement in Vermont.
If you would like to implement a riparian forest buffer on your farm or would like more information on the Conservation Reserve Enhancement Program, please contact your local Farm Service Agency or Natural Resources Conservation Service office. For a directory see: www.fsa.usda.gov or www.nrcs.usda.gov respectively.