This article was one of four winning entries in a writing contest sponsored by the New York State Grazing Lands Conservation Initiative (GLCI).  GLCI is led by a Steering Committee of farmers and agricultural professionals to promote the wise use of private grazing lands, and is funded by the USDA-Natural Resources Conservation Service.
By Anne Lincoln
It was sand……sand everywhere. It was like beach sand that filled the house when the windows were open on a windy day. I had to wear “goggles” over my contact lenses to keep the grit out when I walked in the yard. Some neighbors said “you can’t grow anything on that sand”, but this is what my husband, Dave, wanted to use for pasture for beef cows! The neighbors didn’t know, though, that this was like setting down a challenge to Dave. 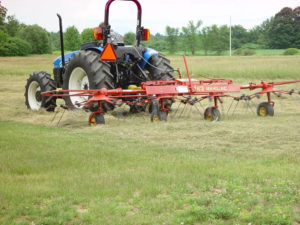 July 2004. We started with sandy soils and thin, nutrient-poor grass.

I saw what Dave was capable of long before he decided to raise beef on our 25 tillable acres in Willsboro, NY. We had moved there in 1998 after learning we did not enjoy the sounds of close neighbors while living in town. We had both been dairy farmers in previous lives before we met in 1992 and we both still loved growing crops and animals in a quiet country setting. My first surprise occurred when Dave had spent the day leveling off a piece of land near the woods. He said he was going to build a shed for his equipment. Well, I kind of humored him, thinking to myself “that’s too big a project; he will never finish it”. I found I had a lot to learn about Dave. Not only did he build the shed, but over the next two years, built it bigger and bigger, even adding an enclosed workshop with a cement floor.
I was obviously worried when he started talking about building a fence that “you can see through” around the fields, especially the field in front of the house. Well, that came true too! In 2004, when we had decided it was time to start getting some cattle, we looked around for someone to build a fence for us. The contractors seemed to all be too busy or too expensive, so Dave bought a post-pounder, ordered a tractor-trailer load of fence posts and went to work building a six-strand high tensile fence.
OK, well, now we had a shed and a fence. What about grass? Remember, you can’t grow anything on that sand! There was some wispy blue grass that was struggling to grow on the nutrient poor soil, so at least we had something to start with. However, the spark to really get things started was our neighbor, Michael Davis, who worked for Cornell. He introduced Dave to some books about grazing, including Quality Pasture by Allan Nation, Management-Intensive Grazing by Jim Gerrish, and Salad Bar Beef by Joel Salatin. Dave ate these books up almost as fast as our steers eat new grass. Dave was now full of ideas on how to grow beef on the sand. Managed grazing would allow us to watch our beef grow on lush green grass instead of what we had growing in the sandy fields.
We started grazing in 2005 with a handful of Herefords, putting them in paddocks separated with temporary fencing, and moving them a few times a day. It was a start, but we had a long way to go to raise good healthy beef on that soil. Dave continued his grass education by attending many pasture walks throughout the Northeast. He went to seminars about grazing and beef cattle presented by the Cornell Cooperative Extension and other organizations.  Dave was especially impressed with Darrell Emmick’s presentation at “Hoof to Rail” about what was termed the “Law of Least Effort Grazing”. Darrell said that it was important to relate the animal behavior to how they graze and react to each other and their surroundings.  There seemed to be an emphasis in many presentations and books on observing the pastures and the animals and this has become a key in our cattle grazing philosophy.
One book also mentioned it would take five years to really see an improvement in the pastures and suggested that many people got discouraged and gave up before they got to this five year mark. Well, it did take five years of grazing with about 30 Hereford and Angus cattle, moving them 2-5 times a day through small paddocks. We saw small improvements each year, but it was around year five when we really saw the results of managed grazing.

What were some of our results from managed grazing?

First time through May 4, 2010. The grass is just getting started for the season

In 2010, we were able to grow more animals and rotate them through the pastures more times than in any other year. The winter of 2010-2011 was long and snowy, but the pastures last spring were green and growing fast, so we are looking forward to an even better growing season in 2012!

For more information on the Grazing Lands Conservation Initiative please contact Karen Hoffman at 607-334-4632 x116 or karen.hoffman2@ny.nrcs.gov.  For assistance with planning or starting up a grazing system contact your local USDA-NRCS or county Soil and Water Conservation District.