“Change brings opportunity. ~ Nido Qubein”
This can be said for the transition made by R H Rhodes & Son Inc, of Penn Yan, NY, when they stopped farming vegetable cash crops in 2003 and explored the venture of becoming black currant producers. 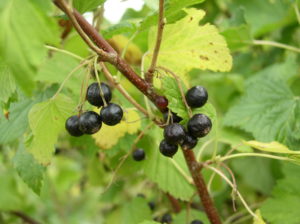 Most people are not familiar with the small black berry that is so popular in Europe and in the culinary world. Many European countries utilize the berries as a substitute for the nutrient rich citrus fruits that are at times hard to obtain. Black currants were once widely grown in the United States until the early 1900s when they were banned as a vector of white pine blister rust. In the late 1960s, the federal government transferred the jurisdiction of the ban to the state governments and in 2003, New York lifted the ban. Decades after the plant was banned, the average person would find little use for the obscure, sharp tasting berry.

Black currants grow on a bush similar to a blueberry bush. Once they are planted it takes 2-3 years to produce fruit. The shrubs are hardy in harsh climates and drought resistant. The weather in the Finger Lakes Region of New York can be a gamble when growing crops, making the black currant a lower risk wager.  The nutritional benefits of the black currant are most likely as little known as the berry itself. It is extremely high in Vitamin C, containing 3 times the daily value of the vitamin. It is high in minerals, vitamins, antioxidants and also contains unsaturated fatty acids, making it somewhat of a “super fruit”.

In 2003, Curt Rhodes of R H Rhodes & Son Inc, a family farming corporation, read an article about black currants and the idea piqued the family’s interest. Switching from a labor intensive vegetable farm to such a unique commodity would take a large investment of family participation and everyone rose to the challenge. According to Carolyn Sullivan, Curt’s sister, one of the most important steps in the decision was to take a good look at what their farm had to offer. The area offers optimum soils, the family has a deep well of farming knowledge and some of the equipment necessary was already part of the farming operation, including a cold storage building. With the ability and the interest present, the next step would be to see if there was a market for the little known crop. Cathy Fritz, another Rhodes family sister, sent out a survey to gauge the interest in black currant use in wine as the farm is located in the heart of the Finger Lakes wine region. The response from the wineries was that the product had a market. The Rhodes family now had the opportunity to make a successful transition to a new crop. The first acre was planted that year based on the availability of plants; today, the farm has a total of 25 acres dedicated to currents. 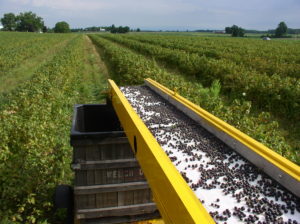 Watching the currants travel along the harvester Photo by Christen Trewer.

In the summer of 2007, the Rhodes family complete with brothers, sisters, in-law, sons, daughters, nieces and nephews, harvested the first acre by hand. Carolyn credits the Cornell University Geneva Experimental Research Station as a valuable resource for crop and market information. Two of the first customers that made the difference for the farm were Montezuma Winery and Bellwether Hard Cider. After some extensive research and number crunching, the corporation made the decision to purchase a mechanical harvester from Oregon. This would make the long hot harvesting days a bit easier on the family as well as making it feasible for them to farm a full 25 acres of black currant bushes. Over the years R H Rhodes & Son Inc. has expanded their juice market to include other wineries and cider mills. Wineries as far away as South Dakota are interested in what the Rhodes family currants have to offer their wines. With the help of an off-farm co-packer, jams and jellies are made and sold at local farm markets.

R H Rhodes & Son Inc. saw the opportunity in producing black currants and seized it. Harvest time is the first few weeks in July. They are currently producing an average of 1 ½ tons of berries per acre and have their entire harvest sold almost before it is grown. This is much different than the vegetable crops that were grown on the farm before. Approximately 25% of the sales are from jams and jellies with the rest of the harvest being sold as juice. 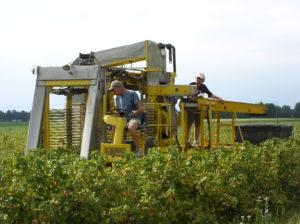 The black currant harvester hard at work in the field Photo by Christen Trewer.

Challenges facing the operation are similar to any farmer producing a crop; they cannot control the weather. Overall, Carolyn feels the cooperation, dedication and knowledge base of the family has kept the farm successful since the transition. The best recognition is that their customers keep coming back year after year. Looking ahead, the Rhodes’ plan to plant 3 more acres of currants and perhaps invest in a large cold storage unit. At the end of the day, the satisfaction of taking a unique transitioning opportunity and making it a successful venture is the best reward.