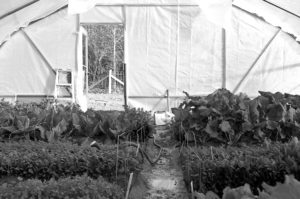 Inside the Winter Bounty greenhouse in mid-November. The door has not yet been installed. Courtesy of Lisa M. Dellwo

On any given summer weekend, a visit to the farmers market can provide the makings for an entire meal or meals: produce, meats, breads, eggs, milk and cream, herbs, baked goods, and sometimes even a bottle of wine and flowers for the table.
We also have the option to buy directly from farms or to visit local markets that specialize in regional goods.

It is more expensive than a traditional supermarket, but many people find it worthwhile for health, ethical, or environmental reasons. Much of the food is grown using organic methods, animals are in general raised humanely, and because the food hasn’t traveled across the country, it is fresh and delicious. Many of us also like the idea of keeping our money in the local economy.

The problem with this system is seasonal. By the end of November, harvest is over and most of the farmers markets have closed up shop. Unless we have “put up” food, we are facing a long winter of eating produce shipped from warmer parts of the world. Even crops that we know grow well in cold weather, like kale, are limp and unappealing by the time they reach our tables.

In 2010, a group of four households in Dutchess County joined together in a venture we called the Winter Bounty Project. We were inspired by the work of Eliot Coleman, who grows produce all winter in unheated or minimally heated greenhouses in Maine. We are not professional farmers, but our group includes three dedicated backyard gardeners and several complete novices who provide unskilled labor and moral support. 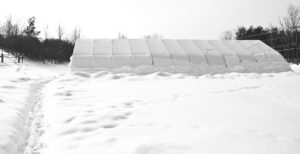 Following the guidance Coleman provides in his book, The Winter Harvest Handbook, we transformed part of a field in Stanfordville into an agricultural oasis with a microclimate similar to that of Gainesville, Florida. This was accomplished by growing plants under an unheated 22- by 48-foot greenhouse and adding an extra layer of protection in the form of fabric row covers during the coldest weather.

The two largest expenses were the greenhouse (hoop house) and irrigation. Our Rolling Thunder greenhouse from Rimol was $6431.53, plus $175 for various modifications including a storm door. The greenhouse is designed to roll back and forth over two plots, allowing for ease of crop rotation and to take advantage of seasonal rainy days.

Because of the location of the greenhouse, away from other structures, we needed to drill a well. The cost of drilling, plus a pump powered by solar photovoltaics, storage barrels, and drip irrigation, amounted to approximately $7,000.
Some additional funds were spent on soil preparation and seeds.

Many of these costs were incurred because in the summer of 2010 we were determined to get the project going promptly rather than wait another year. Anyone considering a similar project could shave these costs considerably by finding a used greenhouse, planting near an existing well, and using volunteer or bartered labor for plowing.
Anyone considering such a project would do well to purchase a copy of The Winter Harvest Handbook: Year Round Vegetable Production Using Deep Organic Techniques and Unheated Greenhouses, by Eliot Coleman.

As a result of careful planning and hard work, our four households were able to supply ourselves with fresh salad and cooking greens and some root vegetables during the entire frigid winter of 2010–2011. Our winter menus featured a Thanksgiving dish of chard braised with cranberries, a huge salad for the Super Bowl party in February, and many soups, stews, and pasta dishes featuring fresh kale, chard, collards, and arugula. There was one memorable moment, on New Years eve, when we passed around a baby carrot fresh from the soil and each took a bite of the sweetest carrot we’d ever eaten. 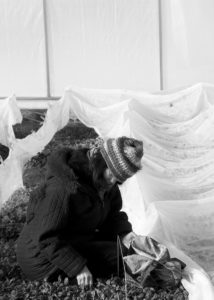 The careful planning included following Coleman’s advice on what to plant and when. The winter crop was heavy on greens: chard, kale, collards, rabe, mizuna, cabbage, lettuces. We also planted leeks, scallions, carrots, asian turnips, radishes, and beets. No warm-weather crops like tomatoes or cucumbers.

Most of the seeds or seedlings went into the ground in August or September. That’s really too late for some of the slower-growing foods like leeks, because everything pretty much stopped growing when the days get short. At that point, the greenhouse to some extent became a cold-storage facility. Plants that had grown riotously during the fall months went dormant in December, as expected, but, except for some arugula and broccoli rabe that succumbed to some form of rot, we didn’t lose anything during the cold months.

After a flurry of planting, thinning, weeding, and watering from August to November, the garden didn’t require much maintenance. There were cold, blustery days when it was as cold inside the greenhouse as outside—sometimes below freezing—and harvesting plants invited frozen fingers. But on some sunny days, the inside temperature of the greenhouse would be at least 20 degrees warmer than outside, and we would pull the fabric row covers back to give the plants some extra sun. That became almost an everyday event starting in February, and in late March, the row covers came off for good. Soon after, we needed to begin irrigating. Plants that had been dormant all winter started growing again in February when the days got longer, and we enjoyed a second harvest of some varieties. Amazingly, in May 2011, we were still eating spinach that had been planted the previous September.

We launched the Winter Bounty Project in what turned out to be one of the most extreme winters in recent memory. By mid-February, we’d had eleven snowstorms and a total of 63 inches of snow, according to Vicky Kelly at the Cary Institute of Ecosystem Studies. There were very few winter rains or thaws to melt the snow cover. 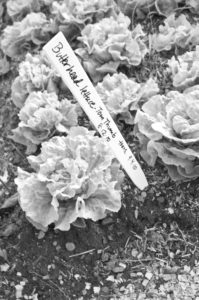 Butterhead lettuce planted in August was thriving in October. Courtesy of Lisa Dellwo.

While the weather sometimes made it a challenge to travel to and work in the greenhouse, it didn’t seem to affect the plants. In fact, we all noticed how remarkably sweet everything tasted. Another Cary Institute scientist, Peter Groffman, told us that the excessive snow piled up outside the greenhouse could possibly have had a positive, insulating effect on our plants.
We are not a commercial operation; our project feeds our four households and some visitors. An accountant running a cost-benefit analysis would deem the project unviable, but it’s harder to quantify the environmental impact of eating less-traveled food and the health benefits of eating fresh, organically grown produce. Those benefits, we anticipated. What we didn’t foresee was the absolute pleasure of walking through a field of snow and stripping off layers of coats and sweaters to work and chat for a while in our little oasis of warmth.

That said, there are ways to mitigate the financial impact of a project like ours. It is likely that a farmer would have lower costs because s/he might have some of the equipment in hand, including the actual greenhouse and irrigation equipment, and could provide much of the labor.
Also, used greenhouses are often for sale on Craigslist or elsewhere, and even a cold frame could be used to protect a bed of hardy greens like kale or chard all winter.

When we look back on our first winter of operations, we are proud of our successes, but what we are most proud of is the number of people who have heard about our project and said “I want to do that too.” It is possible to eat freshly grown produce in the winter in Zone 5, and we hope others will follow suit in the coming years.