Family Dairy Ventures Back into Cheese

By Pat Brhel
Members of the Snow family have been farming in the Town of Caroline, New York, since 1816, nearly 200 years. The current generation has returned to cheese making, a value added product, to enhance the options for their milk and increase the farm income. Cal Snow says, “We’ve got some cheese making equipment around here, old cheese presses and paddles that date from somewhere in the 1800’s and early 1900’s. 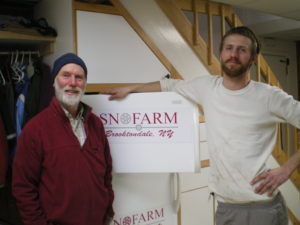 We used to sell milk to the local creameries, as I’ve found notations in early journals and receipt books. Years ago farmers often made their own cheese and butter, selling what they couldn’t use, and there used to be cheese plants in the hamlets of Slaterville Springs, Caroline and over in Speedsville.” The Snow farm is located near all three hamlets. Cal runs Snow Farm with his wife Jean and two of his three sons. John manages the crops, machinery, repairs and a multitude of other necessary jobs around the farm, fields and barn. Aaron is Cal’s partner in the latest extension of the family enterprise, Snow Creamery.
Aaron Snow came back from a two year stint in the Peace Corp with an interest in not only helping in the family business but in taking it another step. “A year ago,” he said, “I didn’t know anything about cheese making, I didn’t even know where to begin. But I’ve been doing a lot of reading and I’ve taken several workshops.”  He also credits Monica Roth of Cornell Cooperative Extension with providing information and practical advice on the various aspects of farm produced cheese, including marketing.
The Snows are rightfully proud of their cheese making operation, a clean, well equipped room where some of the milk from their 40 cow milking parlor is processed in a large stainless steel tank.  After the milk is cultured and begins to form cheese curds, it’s pressed into wheels in a separate side room until the heads are firm, then moved into a cheese cave to cure and age.
“We do about 7 milk cans full per batch,” Aaron relates. “Each stainless steel milk can weighs about 20 lbs. and the milk in it weighs another 80 lbs., so each batch means lifting about 700 lbs. of milk and can from the milk room in the barn into the back of the truck, then carrying them from the truck to the cheese preparation room. Once the milk has been cultured and cheese curds have formed and been pressed, the excess fluid, the whey, is pored back into the milk cans and delivered to a nearby neighbor who raises pigs. The pigs turn the whey into bacon and hams.”
The cheese cave, a small room where the cheeses are left to age has that wonderful smell that only a living product can produce. Each cheese has its own shelf, neatly labeled with the type of cheese and the date it was placed there. The shelves are made from wood harvested on the farm and turned into shelving by still another neighbor.  The design is clever, with the individual shelves wedged in and suspended between two back pieces, easy to remove and clean as necessary.
“We make gouda, provolone, feta and asigo right now.” Aaron relates. “Cheese allows us to extend the life of our milk, the longer the cheese ages, the better it gets, whereas liquid milk has a limited shelf life.”
Aaron shows off the solar powered ventilation system and other modern technology that helps bring the ancient art of cheese making into the 21st Century. “It’s another way to use my mechanical engineering degree, and the variety of skills you need to do a good job keeps me challenged. I enjoy doing this, helping to keep the farm successful and boosting the local economy. I anticipate selling the cheese at local stores and farmers markets, not too far from home.”
“The rest of the milk,” explains Cal, “is still sold through the regular channels, off the farm. We may eventually get to the point where it all goes toward the cheese operation, but that’s in the future. I’d thought about starting a cheese operation in the past, but I’ve always been too busy. When Aaron came back interested in doing this, I was excited. Many hands make light work, and it was that extra pair of hands that allowed us to begin making the cheese.”
Pat Brhel is a community volunteer and freelance writer who lives in Caroline, N.Y. She can be reached at lsparrow@hotmail.com or 607-539-9928.