The Tale of the Tunis – Sheep Once Rare Now in Demand

It is difficult to be objective when you’re in love.   And I confess to have fallen in love with the Tunis sheep breed nearly twenty-five years ago.   A time when few people could identify those beautiful copper red-faced, red legged, creamy wool creatures with pendulous ears in our barn who gave new meaning to good mothering and docile temperaments.  Their gorgeous almost-chocolate fleeced-lambs, born with a double coat of red fibre, look almost like teddy bears at birth, sometimes with a white spot on the forehead and on the tip of the tail.  For the most part they find their way into this world unassisted, healthy and vigorous even in the Vermont January lambing season. 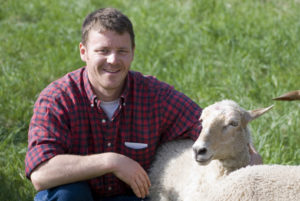 The Tunis are also known to breed out of season and I can attest to having lambed in June and July on a few cycles. This is a bonus for producers whose markets are New York and Boston restaurants where lamb is in high demand in the fall.  Ewes most commonly have twins, but there were more than a few occasions when mom had triplets and one time in the coldest winter I can remember, 2004, that “Pumpkin” produced quads in the middle of the night when the thermometer registered – 20 below zero F.  Sadly we could not save the lambs.

The Tunis are among our oldest sheep breed having been introduced in this country around 1799 as a gift to George Washington from the ruler of Tunisia, the Bey of Tunis, a North African country most recently in the world news.   They date back to biblical times and were commonly known as “fat-tailed” also “broad-tailed” and “Barbary” Sheep who could be found on the John Adams farm inBraintree, Mass and at Thomas Jefferson’s Monticello inVirginia among others. Over time they were crossbred with other European breeds which resulted in our uniquely American sheep breed. 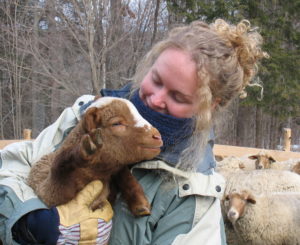 Jefferson was known to prefer the Tunis over his Merinos principally for their wool attributes and meat quality.  In the end, however, the Merinos took national honors in the fine-wool category and the Tunis became known as a meat breed confined largely to Eastern seaboard farms.  According to the American Livestock Breeds Conservancy the “Tunis were a mainstay of sheep production in the upper South and mid Atlantic regions until the Civil War.”

When all of the southern stock was decimated due to the military’s high meat demand, the Tunis became nearly extinct.  Whatever flocks were left found their way to the Great Lakes Region and New England.   The American Livestock Breeds Conservancy lists the Tunis on their “Watch” list as a rare breed.  But that could change.   The National Tunis Sheep Registry reported in 2010 that theTunishave surpassed 1000 lamb registrations per year “attesting to the breed’s wider acceptance and growing popularity.”

One of those producers is Douglas Heaversides of Stonewood Pastures in White River Junction, Vermont who has raised sheep for thirty five years (along with Saanen goats, cows, pigs, Morgan horses and assorted fowl) “I have owned just about every known sheep breed and Tunis tops the list.”   Why? “Because of their sweet temperaments, mothering qualities and mild-tasting meat.  They do well on grass and there is little fat in the meat, it’s tender and my customers love it too.” 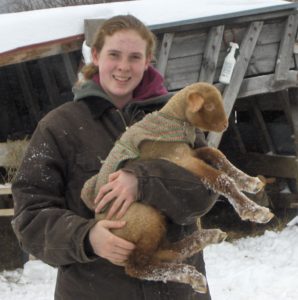 Interesting that this hardy breed is long lived and thrives in the heat and humidity of the south and the cold of the north.  From long and personal experience I can never remember a time when myTunisstayed in the barn even during the worst of snow and cold weather.  When I visited Heaversides on a very cold, single-digit day in February, all of the ewes were out in the snow eating from a round bale guarded closely by the Tunis ram.  Doug’s flock is of the “old style Tunis size and composition.”

This is an important issue in the Tunis community and one that is causing a lot of concern among those of us who resist the idea that the Tunis should be larger for show judging and meat-selling purposes.   The original Tunis genetics that have given us a multi-purpose, heavy-milking, medium-sized animal with the excellent qualities and ease of lambing are being compromised to varying degrees resulting in ever-increasing Tunis sizes and some worrying attendant problems.

Otterknoll Farm producers Amy, Jennifer and mother, Chris Davenport of Wallingford, Vermont are registered Tunis owners with a high regard for the breed.   They also have Oxfords and Columbias among their stock.  Though Amy shows Tunis the family does not support attempts to enlarge the animal.  Chris says that she has seen problems with pasterns “almost to the ground” and thin legs among some flocks at shows.  TheDavenports have left dairying behind, having sold their herd and are confining their efforts to sheep, with Amy saying “there is more money in sheep than there is in dairy.” Something I never imagined hearing.  But the shortage of local lamb is acute just as the demand is growing and prices to shepherds are climbing.

One of the larger Tunis herds in Vermont numbering close to 200 ewes is to be found at Tamarack Tunis in Corinth, where owners Ben Machin and Grace Bowmer raise strictly grass-fed Tunis organically and freezer-packaged lamb for local markets as well as breeding stock and some wool products (made from the Tunis fleece blended with the wool of a couple of Navaho Churros. )  But overall Machin’s primary goal and market rests in meat sales. 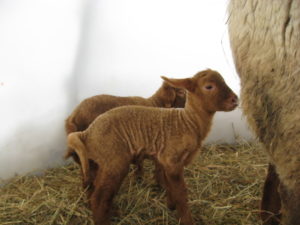 Ben is a fourth generation Tunis producer with a strong interest in preserving the old genetics of these “just wonderful animals.”   His is the “oldest continuously managed Tunis flock in the country” which was started in the early nineteen twenties by his great grandfather.   “Most of the Tunis people in the northeast have stock from my family.”  He is concerned about the alterations that he has seen in some animals, but he does not show and has no problems with legs or pasterns in his flock because he fiercely protects the old-style genetics.

Publicity about Machin’s animals is largely word-of-mouth but he and Bowmer have developed a website (www.tamaracktunis.com) to chronicle the Tunis development and their products for sale.   As with the Davenports and Doug Heaversides, Machin is “getting quite a few calls from people who want to get into them.”  About half the flock is registered and he spends quite a bit of time, networking with the registry (NTSR) trying to find old style flocks in the country.

He has a partnership with the  Swiss Village Foundation in Newport, Rhode Island who write on their website that “the partnership emphasizes several important goals: to preserve the planet’s biodiversity through conservation of endangered breeds, to practice stewardship of the environment through sustainable farming and to offer consumers alternatives by way of supporting a niche market.”   Swiss Village stresses the Tunis’ “high resistance to disease.”

Fancy Meats from Vermont, Manager, Lydia Ratcliff, who represents a Vermont cooperative selling lamb and other meat products to high-end New York and Boston restaurants, says “Tunis are on our short list of superior breeds.   There are not many high-quality meat breeds, for reliably high quality. Tunis is definitely on that list.”

For those readers who are wondering why I no longer have my beloved Tunis sheep, or other ruminants, stay tuned.  As soon as I can move back to my farm in Vermont permanently in the spring, I will be on the “buy list” looking for “old-style” Tunis with the intent to sell breeding stock.   That is if I can ever part with them.