Summer Vacations to the Farm

During the late 1940’s and early 1950’s my family, like many others, spent vacation time visiting relatives in the summer. The nation had just endured a war and money was scarce so family visits were a good match.

Mistwold Farms lane by the barn

My mother’s cousin, her husband and three daughters were part of a three-family owned dairy farm in Fremont, New Hampshire. Mistwold Farm, according to my cousin means “misty woods” because fog always clung to the fields in the early mornings. This large dairy farm had been a family institution for many years and included a milk processing & bottling plant to support a milk delivery business.
Going to the farm absolutely thrilled me, even though it was a long, always hot car trip especially for a youngster between 8 and 12 years old. A large farm was such a contrast to living in a small Upstate New York State village.
This Mistwold Farm complex consisted of a circular driveway with a house on each side and a huge white clapboard-sided, black-trimmed barn at the apex of the curve. Facing the driveway was a large double hung barn door that allowed hay wagons access to the second floor hay mow. The cows were housed below. The milk plant stood to the left of the barn, with several various sized out-buildings scattered behind it. On one side of the pasture a classical New England fieldstone wall paralleled the road as it had for decades.
I can remember many games of hide-and-seek in the barn, hours spent on the swings in the yard and walks in the pastures. What I really liked was to help with the farm chores. Sometimes I could ride on the tractor when they were haying or help feed the cows and clean the stalls or walk to the pasture where the cows roamed and help my cousins herd them in for the night. I could watch the milking operation as well as the milk bottle filling process, an automated system that moved along with great speed. On one occasion I witnessed the veterinarian give a cow a rectal exam with his whole arm. What an impression that made! 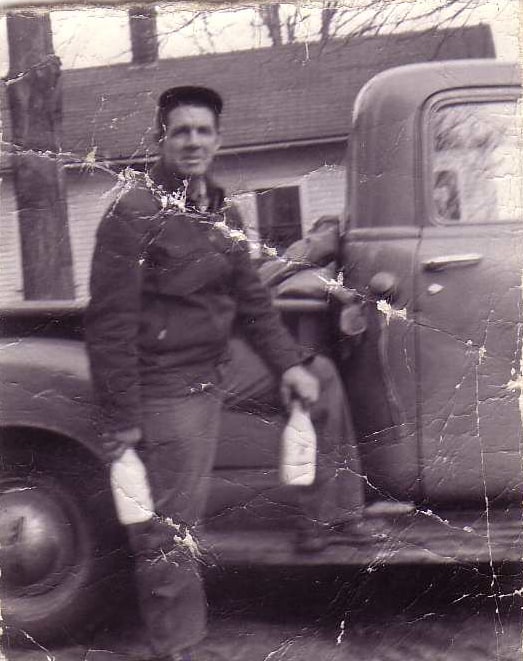 One of my fond memories was the day I rode along delivering milk to customers. We woke before dawn and after an oatmeal breakfast, went directly to the milk plant to load the truck for what would turn out to be an all day venture. The milk bottles were placed in wooden crates with metal dividers after the filling process. Later these crates were taken from the cooler and loaded on the back of a pickup truck, after which chunks of ice were strategically located on the tops of the filled milk crates. The final task was to stretch a heavy tarp across the top of the crates to keep the milk cool. We spent the entire day driving from customer to customer to deliver the bottles of freshly produced milk, from farm directly to home.
Every man who worked on the farm wore a blue and white striped hat like train engineers wore. Once washed, these hats were pliable and looked tailor- made for each person that wore it. I HAD to have one. My parents looked all over for one but apparently not in the right places. They found a navy and white baseball hat but it wouldn’t do. I wanted to look like all of the others who worked on the farm. Not too many years ago, I finally found one and bought it immediately in case I ever wanted to work on a farm on my vacation.
When our children were in their early teens we took our fold-down camper to Maine for a week long vacation. On the way home, I proposed going through New Hampshire to see if I could find the farm where I had so many fond memories. I did find it and found myself driving up and down the now paved road several times in order to view it from every angle. The two homes were still there but the barn complex had been destroyed by fire years earlier. Yes, the field stone wall still bordered the pasture.
Isn’t it interesting what a positive impression a week’s

vacation on a farm made to a youngster whose family probably only had enough money to visit relatives. An appreciation for the hard work, passion and dedication of farmers to bring food to our dinner table lasts a lifetime. Sixty years later I find it heartening to hear that young folks and even families are being encouraged to volunteer to help others, including taking vacations to help on farms. I hope they make their own fond memories.