Seven years ago, Sara and Raymond Luhrman began farming on rented land, serving ten members in a Community Supported Agriculture model (CSA). Two years later, they were up to forty members and had outgrown their land. They had started farming as a hobby, and with such a big operation, it had outgrown its place in their lives, too; they had to decide whether to scale back or go all-out. “So I quit my day job,” Raymond says. 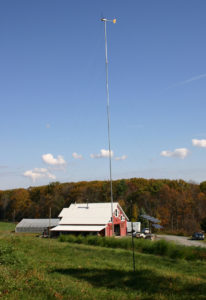 To keep costs down, the Luhrmans installed the wind turbine and solar panels themselves. Photo by Violet Stone

Five years after the move, the Luhrmans serve 200 CSA members at Fox Creek Farm, and they do it without a connection to the national grid. When they bought the land, which adjoins their original rented site, they were faced with the decision of whether to spend the $40,000 to get electricity in, or to try to manage without the grid’s safety net.

They opted for self-sufficiency, installing a 1 kW photovoltaic solar array and 100-foot wind turbine. Along with installing the means of production, the Luhrmans paid attention to minimizing their energy needs, selecting a high-efficiency well pump and heavily insulated cooler for storing the vegetable harvest until delivery.  They built their house, the first floor of which is a barn, according to the principles of passive solar design: south facing, super-insulated, and with opportunities for cross-ventilation to lower summer temperatures.

Without a connection to the grid, government subsidies and incentives disappear. Raymond and Sara had to finance their own energy entirely. To keep costs down, they installed the turbine and panels themselves. Raymond says some understanding of electrical installation work is needed, but neither Raymond nor Sara is trained in the area. They ordered catalogs from off-grid solar and wind suppliers to learn “what kind of questions to ask when you start to design the system,” Raymond says. Next they found manufacturers and suppliers (the Alternative Energy Store in Massachusetts and Backwoods Solar in Idaho), and asked them questions. Once they had ordered their supplies (Evergreen panels, Outback inverter and charge controller, and a Bergey turbine and tower), they made use of the components’ detailed installation instructions.

Site testing was as expensive as the actual installation, so the Luhrmans consulted online wind maps and found the sunniest spot near the barn to determine locations. They also visited off-grid family homes, to see full systems in operation. One of the challenges was sizing the system correctly. Using their budget as a guide, they made a guess, and in Spring, 2010, they added another .3 kW to their photovoltaic array. The total cost of both the wind and solar installations came to $20,000, half of the initial cost of connecting to the grid. 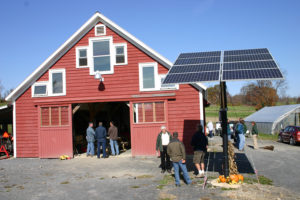 A passive solar design warms the upstairs living space of the barn. The Lurhmans use only 1 cord of supplemental wood heat over the course of the heating season. Courtesy of Violet Stone.

Without the grid to fall back on during cloudy, still days, the Luhrmans have to watch their energy consumption carefully. “It makes you very aware of how much energy you use,” Raymond said. “Not like an abstract number in a dollar amount at the end of the month when the bill gets sent to you by your energy company.” After producing their own energy continuously for four years, the Luhrmans have figures at the ready: they use 8 to 9 kW a day during the farming season, and less during the rest of the year, when the cooler is off.

“The biggest drawback,” Raymond mused, “is if we were to get into a value-added operation like freezing, for example … that would take another couple solar arrays. On the other hand, the size the farm is, we make a living off the operation. It’s a good match.”

Annie Bass was a summer intern with the Cornell Small Farms Program in 2010. She may be reached at arb258@cornell.edu.
Posted in Small Farms Quarterly