Richard Lamoy at Hid-In-Pines Vineyard is researching the best training systems for his hybrid varieties with the help of a SARE farmer grant.

Welcome to the Northeast SARE Spotlight! SARE (Sustainable Agriculture Research and Education) offers grants to farmers, educators, universities and communities that are working to make agriculture more sustainable – economically, environmentally, and socially. Learn about whether a SARE grant would be a good fit for you.

French law has regulated how wine makers can grow their grapes since the sixteenth century. Germany, Hungary, and Portugal also have some of the oldest appellation laws, from what percentage of the grapes in a bottle of wine have to be of the stated variety, to how many buds can be left on each vine. Needless to say, the best ways to grow the old varieties of grapes are well known. 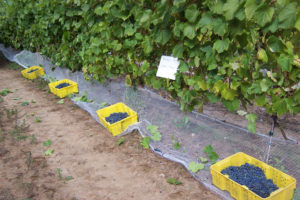 A cluster of Frontenac grapes at harvest Photo by Richard Lamoy

Richard Lamoy operates Hid-In-Pines Vineyard, in Morrisonville, NY, and unlike the time-tested varieties of Europe, his main varieties of grapes are hybrids, which were developed in 1911, 1970, and 1996. Though Leon Millon, La Crosse, and Frontenac grapes are now grown throughout the Midwest, Northeast, and Canada, there is still no consensus on what the best techniques are.
With the help of two farmer grants from Northeast SARE, Richard is finding out. In 2009, he conducted an eighteen-way comparison: the Leon Millon and Frontenac varieties were trained in Vertical Shoot Positioning and 4 Arm Kniffen systems, La Crosse vines were trained in 4 Arm Kniffen and Top Wire Cordon systems, and all six of those samples were divided into Shoot Thinned, Cluster Thinned, and control vines. For each combination, Richard measured the productivity of the vines, the sugar and acidity of the grapes, and the labor required to produce them, calculating a net value per acre. In 2010, he is repeating the trial to verify the results. He also added four new varieties of vines, trained in four different systems, to show field session attendees how to prune in the vines’ establishing years. 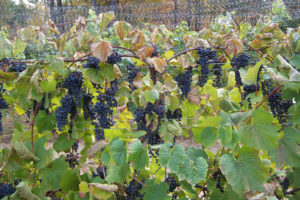 The training systems dictate which parts of the vine are removed in the winter and how the remaining parts of the vine are directed to grow. The shape and layout of the vine can be tailored to optimize airflow, preventing disease, and sun exposure, allowing the leaves and berries on all parts of the vine to photosynthesize properly. The training system can also ease vineyard maintenance, putting all of the grape clusters at an optimal height and positioning the locations to be pruned.
In 4 Arm Kniffen, the vine has two sets of two branches (cordons), like a combination of a capital and lower-case T. The cordons are trained to grow along horizontal wires. Shoots, the small branches which are pruned at the end of each season and which bear the clusters, grow from the cordons in all directions. In Vertical Shoot Positioning (VSP), two cordons grow along the lowest of several wires, and the shoots are sandwiched upright between the higher sets of wires. In Top Wire Cordon (TWC), the vine has two cordons along the top wire, and the shoots hang down across the lower wires. The Shoot Thinned and Cluster Thinned vines were pruned during the growing season according to their names. 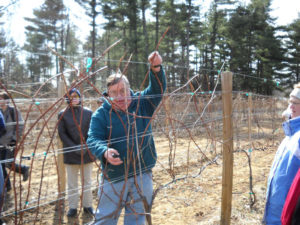 Richard found the largest gains with the Frontenac vines grown in 4 Arm Kniffen with Shoot Thinning. A combination of low maintenance, low acid, and high sugar (due to the levels of sunlight the fruit received) both increased the grapes’ value and decreased labor costs. Though the higher yield produced by a particular method is sometimes counterbalanced by the poor quality of the fruit, in the Frontenac case, the Shoot Thinned 4 Arm Kniffen produced both better fruit than the VSP vines, and more of it. In the case of the Shoot Thinned vines, 4 Arm Kniffen yielded 67% more fruit than VSP. The Leon Millot variety yielded similar, though less dramatic, results.
The La Crosse vines were a replacement for a sample of the Chardonnel variety, which are usually cold hardy enough to grow in northern New York, but which suffered dieback all the way to the snow line due to unusually cold temperatures last year. The rows containing La Crosse vines were shaded by trees with Richard has since cut down, which lowered the grapes’ sugar levels. Their acid levels were also low, indicating that without the shade, the other conditions would produce high-value grapes. The four-armed vines produced a higher yield than the two-armed (TWC) ones.

Sustainable Community Grant – Due October 19, 2010
Sustainable Community Grants are for projects that strengthen the position of sustainable agriculture as it affects community economic development. Communities and commercial farmers must benefit from these proposals, and the selection emphasis is on model projects that others can replicate. We also look for projects that are likely to bring about durable and positive institutional change and for projects that benefit more than one farm. Grants are capped at $15,000.
Learn more at: http://nesare.org/get/sustainable-community/
Partnership Grants – Due November 16, 2010
The purpose of the Partnership Grant program is to support agricultural service providers who work directly with farmers to do on-farm demonstrations, research, marketing, and other projects that will add to our understanding of sustainable agriculture. Sustainable agriculture is understood to be agriculture that is profitable, environmentally sound, and beneficial to the community. The maximum award is $15 ,000 and the average award is $9,550.
Learn more: http://nesare.org/get/partnership/
Farmer Grants – Due December 7, 2010
The goal of the Farmer Grant program is to develop, refine, and demonstrate new sustainable techniques and to explore innovative ideas developed by farmers across the region. Farmer grant projects should seek new knowledge that other farmers can use and should address questions that are directly linked to improved profits, better stewardship, and stronger rural communities. The maximum award is $15,000 and the average award is around $6,500.
Learn more: http://nesare.org/get/farmers/
Learn more about the Northeast SARE program by visiting www.nesare.org or by contacting Northeast SARE 655 Spear Street University of Vermont, Burlington VT 05405 Phone (802) 656-0471 Fax (802) 656 -0500 E-mail: nesare@uvm.edu

Comparable projects often outsource the testing of their results. Richard worked on a previous project testing which of 25 varieties were sufficiently cold hardy, which did just that. (The project was guided by Kevin Iungerman, of the Cornell Cooperative Extension NY Fruit Program, who as a result of that collaboration became Richard’s SARE grant technical advisor.) But this time, Richard did all of his analysis in-house. From September until the mid-October harvest, he measured the brix (sugar), pH, and titratable acidity of 50-grape samples from each group of vines—every ten days. The results are available along with his final report, one spreadsheet in a series of meticulous records, which allow others to make use of his results, and made Richard’s 2010 SARE project all the easier.
Unlike France’s Appellation d’origine controlee laws, Richard isn’t looking to specify font sizes for wine labels. In fact he doesn’t want to regulate anyone’s practices at all. But the information he’s providing is just as precise and reliable as any old-world code. And it may just change the norms of new-world viticulture.
This article discusses SARE grants FNE09-662 and FNE10-691. To view the final report from 2009, visit http://sare.org/MySare/ProjectReport.aspx?do=viewProj&pn=FNE09-662.
For the 2010 final report, available in 2011, visit http://sare.org/MySare/ProjectReport.aspx?do=viewProj&pn=FNE10-691.
To learn more about Hid-in-Pines Vineyard, visit www.hipvineyard.com/hipvineyard.
Annie Bass was a summer intern with the Cornell Small Farms Program in summer 2010. She may be reached at arb258@cornell.edu