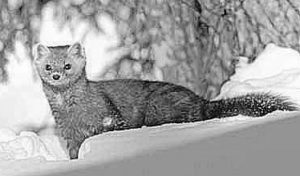 The American martin is a member of the same family as skunks and weasels. It inhabits primarily coniferous forests, found across northern parts of NY, BT, NH, and ME.

NY State and Pennsylvania are home to hundreds of species of birds, animals, reptiles, amphibians, fish, and invertebrates.  Many populations of these species are flourishing, such as whitetail deer, raccoons, and Canada geese.  Many other species are not as fortunate and are declining in numbers due to a host of influences such as; exotic invasive animals, insects and plants; climate change; development; land use changes; and pollution.  The overwhelming percentage of all wildlife species live on privately owned lands in these two states, as is the case throughout the Northeast.  Our woodlands, farmlands, wetlands and other habitats provide the necessary food, water, shelter, and space for our rich assemblage of wildlife species. 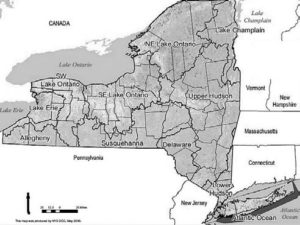 The information in the Comprehensive Wildlife Conservation Strategy (CWCS) for NY is organized by the major watershed basins of the state. The watershed basin boundaries were compiled by USGS for every state and provide a seamless map layer across the country that will facilitate regional and national collaboration in implementing all the state CWCSs over the next decade.

To combat this decline in wildlife, biodiversity, and ecosystem stability, in 2002 Congress began funding the State Wildlife Grants (SWG) program, for all of the US.  The intent is to maintain the biodiversity of wildlife in this country and prevent new listings of endangered species.  This federal grant program was the first large scale funding program for wildlife since the Pittman-Robertson Act in 1937 and Dingell Johnson Act of 1959 (Federal Aid in Wildlife and Sport Fish Restoration Act, respectively).  States receiving SWG funding are required to prepare a Comprehensive Wildlife Conservation Strategy that must identify and focus on the “species in greatest need of conservation,” yet address the “full array of wildlife” and wildlife-related issues.
The following website http://www.dec.ny.gov/animals/30483.html contains additional key elements specifically described and laid out including maps and lists of species of greatest conservation need in NY State for each of the 11 major watersheds. 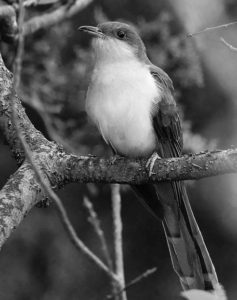 The black-billed cuckoo is a designated “species of greatest conservation need” with populations decreasing throughout most of NY State. These birds forage in shrubs or trees. They mainly eat insects, especially tent caterpillars, but also some snails, and eggs of other birds and berries. The call is a rapid, repetitive Coocoocoo.

The administering agency for the State Wildlife Grant in NY State is the NY State Department of Environmental Conservation, (DEC).  A promising example of a SWG activity is a contract that the DEC has in place with the NY Forest Owner’s Association, (NYFOA).  NYFOA is helping to spread the word about the state’s efforts to aid fish and wildlife species in greatest need of conservation. This non-profit organization of forest landowners is taking steps such as distributing information about the Comprehensive Wildlife Conservation Strategy to landowners in the state.  Private forest landowners, who own about 72% of NY’s 18 million acres of woodlands have an exciting opportunity to upgrade wildlife habitat on their lands in partnership with NYFOA.  Information about the SWG in New York can be found by going to  http://nyfoa.org/swg/index.php and http://www.dec.ny.gov/animals/9404.html.
In Pennsylvania, the administering agency for the State Wildlife Grant is the Pennsylvania Game commission, and information can be found by cutting and pasting the following url into your internet browser: http://www.portal.state.pa.us/portal/server.pt?open=514&objID=622722&mode=2

The blue-spotted salamander occurs across most of NY State. It is mid-sized, broad-headed, with bluish-black skin color with blue-silver spotting and flecking on the back, legs, tail and sides. They depend on temporary ponds (vernal pools), seasonally flooded in early spring for reproduction.

Rich Tabor is a Natural Resources Communication Specialist at Cornell Cooperative Extension of Chenango County in Norwich, NY.  He can be reached at 607-334-5841 or rbt44@cornell.edu