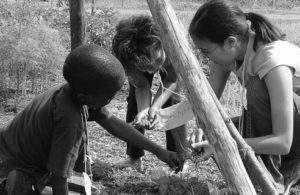 Children get their hands dirty at the ‘Learning Garden’ at Waltham Fields Community Farm. Photo by Claire Kozower

A net increase in farms?  Nationwide?  Who would have thought?  But it’s true.  For so long we have been treated to the demise of farms and farming while the advent of the “fifteen hundred mile tomato” became the norm.  The book Farms of Tomorrow written in 1990 and revisited in 1997, envisaged what surely was thought to be a utopian notion that communities would begin to buy up land, remove it permanently from the tax rolls and dedicate it to production of food for local consumption.
The authors advanced the theory that land should not be a commodity, that land “can no longer be used as a collateral for debt”, that farmers need to farm and not pay mortgages on taxable land that competes with market prices.   They did not neglect the problem of the farmer in old age in need of financial support and without land to sell.  Those needs would have to be born by the larger community similarly to other public servants in the form of retirement benefits. 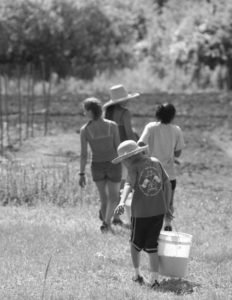 Youth are given an opportunity to tend their own small farm plots at Gaining Ground Community Farm in Concord, Massachusettes. Photo by Gaining Ground Farm

Clearly times are changing, and since I have been living in the Boston, MA area for most of the past year, I have begun to investigate the growth and nature of some of the five dozen community farms and CSA operations.  These operations  are thriving and feeding thousands of urban dwellers — many of whom are living in the inner city, far from well-stocked suburban markets.   Massachusetts appears to be among the states in the forefront of this movement.  Thus this story will showcase a small sample of farms in the Boston area with different operating models, but all of which have been in operation for at least several years.  In all cases the land is town or state owned. They are small and not family operated, all have head farmers and/or executive directors and at least two are under the aegis of the local conservation commissions who have oversight responsibilities.
Codman Farm Lincoln Massachusetts.
Lincoln is a wealthy suburb close to the Boston area with a fierce reputation for land and resource conservation.   Until the early fifties it was home to many dairy farms but as they began to dwindle and give way to suburban development the community sought to preserve its agricultural heritage and stem the tide towards houses, condos and business parks. To date the town conservation commission has preserved more than 1800 acres of agricultural and forest lands. 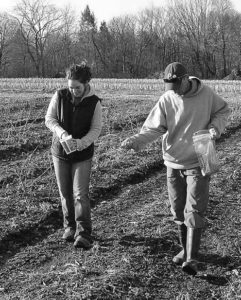 Seeding clover in the rasberry patch. Waltham Fields Community Farm has an active farmer training program in which apprentices spend one to two years learning all aspects of farming. Photo by Claire Kozower

Dorothy Codman, a local dowager, died in 1969 and left a sixteen acre farm to the town.   It quickly fell into disrepair looking more like a local junk yard filled with old tires, broken fences and police and highway equipment.  Four years later the town voted to restore the land to its agricultural origins over the choice of a recreational area.
Jen James is Codman Farm’s newest executive director.  She is charged with Codman‘s central purpose which is “to teach and advance farming practices and to maintain rural beauty in Lincoln.” Codman welcomes visitors, like all the other farms featured in this article. Together with Peter, the head farmer, and several interns, they manage a small herd of Devon/cross beef cattle, pigs, chickens and goats, all of which are eventually direct-marketed at the Codman store and provide a partial source of income.  The store is open seven days a week.
The farm is a non-profit membership organization which is financially independent from the town except for major purchases and repairs.   Codman generates a sizeable income from haying 130 acres of the town land.   Additionaly, Codman offers firewood, compost and rototilling, bush-hogging and custom work services.   The farm also relies on events, fundraising, CSA income and volunteers to stay afloat.
Waltham Fields Community Farms
Not far from Lincoln is the once gritty blue collar industrial city of Waltham which has since evolved into a culturally and economically diverse setting housing two major universities and several technological powerhouses including Microsoft and Oracle.  It is also home to an eleven acre organic piece of state-owned land formerly a University of Massachusetts research station.   Claire Kozower, executive director of the WFCF, carries out the farm’s stated mission of “sustainable agriculture, education and hunger relief” for a voting membership organization. To that end the farm donates more than 150,000 pounds of organic produce to shelters and local food banks annually.

The lucrative CSA charges $550 a season that extends from May to October. In 2009 there were 350 CSA shares sold to passionate consumers of small fruits and vegetables mostly within a ten mile radius.    For those unable to pay the market rate for a CSA share, WFCF has a new program called “The Outreach Market” which allows a low income person to pack all the veggies they want in a bag for $5.
WFCF has an active farmer training program in which apprentices spend one to two years learning all aspects of farming including the planning and business side of farming.  The goal is to show that farming can be self sustaining with a high production focus.  It is currently under long term evaluation and eight graduates are now farming in Massachusetts and New Hampshire.
WFCF has strong linkages with several farms and includes many different products produced by those farms for its CSA.   Meat products come from several sources, apples from another.  The farm also has incredible support from local officials who come to the farm events throughout the year.   Kozower hopes to enlist their support as she looks to expanding the farm to the local Fernald School, depending on the quality of the soil and the prospects of being financially viable.
Gaining Ground Organic Farm
Set on the Thoreau birthplace and at the Old Manse (Hawthorne’s Home) in affluent Concord, yet another farm that relies heavily on the help and support of volunteers is the Gaining Ground Farm.  Founded in 1994 the farm operates on seven acres of land that has been in continuous production for 350 years.   The “farm doesn’t sell anything” according to board president, Pam Goar whose enthusiasm for her job she calls “the most unbelievable privilege” led her to give a farm tour immediately following a “redeye” flight from California.
The farm is operated by hundreds of volunteers with few staff lead by head farmer, Verena Wieloch.  Today she is leading a group of ten eighth graders in new program called, Grow Wild which gives young people a piece of land to cultivate independently in hopes that it will produce a new crop of farmers.
Gaining Ground subsists on the support of “generous donors, trustees and fund raising events.”   With the addition this year of a sugarhouse, one young customer said that “the air smells like fresh cakes.”    7,000 hours of volunteers’ time and energy in 2009 translated to help from five different local organizations including the “ladies in wheelchairs” who came once a week during the growing season and washed herbs at large tubs.  At season’s end, the farm had donated 23,000 lbs of produce to food pantries and meal programs in six different surrounding communities.
Thanks to a new contract with Massport and Concord Division of Natural Resources, Gaining Ground will farm an additional two acres to add more food to more organizations with the help of more volunteers.
Martha Herbert Izzi is the owner of Bel Lana Farm in Chestnut, MA.  She can be reached at 802-236-3744 or mhizzi@yahoo.com.