Growing Mushrooms for Fun and Profit 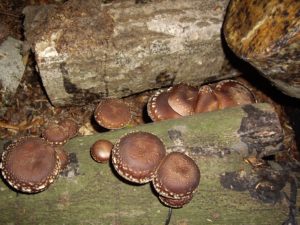 In the Fall 2009 issue of Small Farms Quarterly, Mike Farrell wrote an introductory article on some agroforestry topics, including maple syrup production and nuts. There are dozens of other crops that can be farmed in the understory of a forest including ginseng, floral and ornamental crops, specialty wood products, fruits, and mushrooms. Most agroforestry crops are generally considered niche market crops and may require a little more marketing work on your part, but the potential profits are worth it.
Which one to try? Many agroforestry crops have a natural timing that put the majority of their work at different times of the year. Maple: tapping, collecting and boiling in early spring; ginseng: harvesting and drying in the fall; mushrooms: inoculating in early spring and harvest throughout the summer. Look at your farm’s schedule and the timing of the agroforestry crops you’re interested in to see which will fit best. Remember, they all have some sort of year-round work, whether it is scouting for pests, fixing tubing, or marketing. Take all of the tasks into consideration. 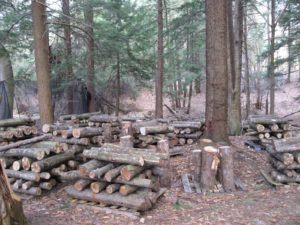 One agroforestry crop that is garnering a lot of interest is mushrooms. Generally speaking, agroforestry mushrooms are those grown in logs or woodchips in the understory of a forest. The most commonly grown are shiitake (pronounced “sheetaakee”), oyster, and lion’s mane. Some lesser grown are chicken of the woods, hen of the woods, and wine cap stropharia. However, the vast majority of commercial producers only grow shiitake. There are only a few commercial agroforestry mushroom growers, so the potential for a market in your area is probably good, but check into it before you start.
Each mushroom strain has preferred host species. It is easiest to match the fungus strain with the trees you have. Contact a mushroom supplier to discuss the best strain(s) for you. The timeline: fresh logs are cut in late winter or early spring and inoculated soon after. Inoculation refers to the process of placing a known mushroom strain inside logs to colonize them.  Two standard inoculating methods are drilling small holes and filling the holes with spawn (pre-colonized substrate such as dowels, sawdust or grain), or cutting larger logs into rounds and stacking them totem style with spawn layered between the rounds. Once the logs are inoculated, they are left to colonize for one to two years, depending on the mushroom species and wood species. Colonization happens in a laying yard where the logs are stacked in some manner. This is a cool, moist area, that has a dense overhead canopy of conifers to provide year-round shade.  Access to water is also handy, such as a creek, but is not paramount in choosing a laying yard. Maintaining high moisture content in the log is important- it is a fungus after all. To increase the chance of producing a successful crop, you should use freshly cut, green logs as stock.  Also, consider watering the logs during the summer and plan to protect them from the dry winter sun.


Dr. Ken Mudge, Assoc. Prof. at Cornell University, does research and extension in the area of agroforestry, including mushroom production. Each spring he conducts a training workshop called “Camp Mushroom,” at Cornell’s Arnot Forest. He cautions all potential growers to realize that this endeavor is not for everyone! It is important to have several key factors in your favor to make the effort fun and profitable. For example, Ken suggests that you start small and increase production over time as you become more efficient and hopefully your markets grow.
Case Study
Mr. Steve Sierigk, from Schuyler Co. in NY State, has been growing shiitake mushrooms commercially, on a part-time basis, for about 5 years. Some of the important factors that make it profitable and enjoyable for him include:
• already had a booth a viable local farmer’s market
• enjoys receiving some payments in the form of bartering
• enjoys the social interaction of finding markets, working with other producers and establishing a loyal clientele
• owns a woodlot and can get spawning logs while doing his management thinning and producing firewood
• started small with about 100 logs and now has increased production to 400 logs, which means he needs to add about 100 logs annually as some logs go out of production
• hands-on labor is a nice break from his full-time job
• still thinks shiitake mushrooms taste GREAT!

After the logs are colonized they will begin to fruit. Fruiting will be light the first year, and pick up in the middle years. Logs can have multiple flushes of mushroom each year and can fruit for 2-6 years depending on the species of wood. Once all of the nutrients have been extracted, the log will be very light and no longer able to support mushrooms.
Fruiting will come in flushes, depending on temperature and the strain, and can be forced twice a year by shocking in water.  Harvest with a sharp knife every couple of days. Mushrooms are highly perishable, so quickly put them into cool storage and sell. Your marketing method needs to be determined BEFORE mushrooms appear. Consider restaurants, farmers markets and local groceries. You can also sell dried mushrooms for a year-round market.
More information about agroforestry mushrooms, including links, videos, workshops and detailed instructions, can be found at the NY Forest Mushroom Growers Network, http://mushrooms.cals.cornell.edu/.
Enjoy the fruits of your harvest!
Rebecca Hargrave is an Extension Educator at Cornell Cooperative Extension of Chenango County. Her work involves adult and youth programs in natural resources and horticulture.  She can be reached at 607-334-5841 ext. 16, or jrh45@cornell.edu