Prudent Carnivore: Chicken, Inside and Out

Often, one of the first forays customers make into the world of farm-direct meat buying is pastured poultry.  From the viewpoint of a farmer, nothing could be simpler (or cheaper) to bring home to the kitchen.  During the morning rush at our farmers’ market, I tend to grab the plump birds, bag them up, total the purchase and send my customers happily on their way, scarcely taking the time to even look up.  It is only when my husband thoughtfully pokes me in the ribs that I lift my head and notice the occasional truly new customer, whose eyebrows are raised in a state of innocent confusion and trepidation as they take possession of their dinner.   If you’ve never purchased a pasture-raised chicken directly from a farmer before, there is definitely some sense of mystery to it.  Even veteran farm-direct shoppers can always learn a few things about what they are buying, including how to get the most for their money. 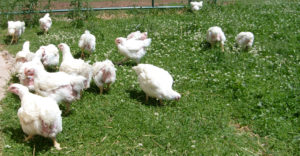 Pasture-raised broilers require grain supplementation in order to grow well. Thus, we do not call them “grassfed.” Instead, they are referred to as “pastured”.

First of all, there is no such thing as a grassfed chicken.  Chickens are omnivores, which means that, although they eat a lot of it, they cannot subsist on grass alone; they need some protein in their diet.  In the old days, when folks had chickens running around their backyards, they were often raised on household food waste, such as scraps of bread, vegetables, fruit, egg shells and, yes, even meat.  Like the backyard pig, chickens were a critical part of a family ecosystem, converting food waste into more food for the future.  Today, however, since most people do not keep their little flock behind their house or apartment building, it is up to farmers to produce them for many people.  Our household scraps would never suffice.  Also, while the chickens see nothing wrong with it, many people frown on the idea of feeding animal by-products, even leftover dinner scraps, to other animals that will be processed for meat.   Although a good farmer will keep their chickens out on well-managed pastures rich in insect life, there will not be enough bugs around to satisfy the hunger of an entire flock.  That’s where the grain comes in.  Pasture-raised broilers require grain supplementation in order to grow well.  Thus, we do not call them “grassfed.”  Instead, they are referred to as “pastured” (not, as many mistakenly say, “pasteurized,” which is a heating process to sterilize conventionally-produced milk).

Some people refer to these chickens as free-range.  While chickens that are raised out on pasture may be properly considered free-range, it is important to note that free-range chickens are not necessarily pastured.  My first experience visiting a free-range chicken farm is something I hope never to repeat.  The birds were tightly crammed into a barn, with an open door covered over by a fence panel.  The place reeked of ammonia from the excrement.  Free-range, according to the producer, implied only that they were not in cages and that they had access to open air.  It meant nothing about ample room to roam, constant access to fresh air and lush clean pasture, all which are essential elements in responsible pasture-raised chicken production.  Thus, before you buy, it is always best to ask if the birds are kept outdoors and how often they are moved to fresh pasture.  Better yet, if you get a chance, go see the birds for yourself.  The access to green grass and the ability to roam about freely and without stressful crowding will directly impact the flavor of your bird.

The next thing to know about your pastured poultry:  It ain’t cheap.  Pastured poultry has the lowest price per pound of all the meats we sell on the farm.  It is even cheaper than our hamburger.  Nonetheless, it is also the most expensive to produce.  That is because moving chickens to fresh pasture is far more labor intensive than opening a gate and allowing a herd of sheep or cattle to run to the next field.  Chickens require constant access to shelter, so when they are moved, the shelter must also move.  They don’t move as a unit like sheep or cows, and many often require individual handling to get them to a new place.  Their grain, especially since a lot of corn is being diverted to ethanol production, is very expensive.  Processing the birds is also labor intensive.  We sell pastured chickens at our farmers’ market for $4.95 per pound, and even then, our return to labor is only minimum wage.

Farmers are reluctant to charge more, because culturally, we have grown accustomed to thinking of chicken as “the cheap meat.”  In fact, prior to World War II and our nation’s push for cheap grain, as food historians John and Karen Hess point out, chicken was actually expensive.  Unscrupulous food purveyors were known to substitute veal in Chicken à la King.  Hopefully, there will come a day when farmers can once again charge the real cost for growing chicken. Until then, most of us farmers are afraid that consumers will get so angry with the price that we will lose business.  Thus, we keep the price artificially low in efforts to keep our customers.

From the consumers’ perspective, $20 for a four-pound bird still seems like a bundle.  But it’s a bargain.  Honestly.  I promise.  The chicken that appears on your table for dinner is only the first meal you will get for that $20.  One whole pastured chicken is actually the base for three meals.

For the first meal, roast or grill the bird.  The breasts alone off a pastured bird are often enough meat for four servings, especially if it is made even richer by serving it up with gravy or a pan sauce, and it is accompanied by other foods.  When meat is truly nutrient-dense and full-flavored, we do not need to consume volumes of it in order to sustain ourselves. When you take the chicken out of the oven or off the grill, gently slide your knife down along the breastbone and “wishbone” to remove each breast.  Then, slice each breast half just as you would your Thanksgiving turkey, crosswise into several thin strips. Fan the strips out on four different plates, drizzle generously with the gravy, and you will be surprised at how generous the portions truly are. And how flavorful. Of course, if you prefer dark meat, then feast on the legs and thighs, and save the breast meat for your second meal.

For the second meal, pull off all the remaining meat.  There will be some morsels still resting on the breast bone, and lots of meat in the thighs and legs.  Be sure to pull off any bits along the rib cage, then flip the bird over and run your fingers down the back until you find the two tenderloin pieces, also referred to as the “oysters.”  Let none of the meat go to waste.  Once you’ve pulled off all this meat, use it for a chicken salad, casserole, chicken à la king, in a cream sauce with crepes, or even in croquettes. The possibilities are endless.  Since we are in the height of summer as I write this, I’ve provided an Asian style chicken salad recipe below, which makes use of summer’s vegetable bounty.

For the final feast, now that the bones have been picked clean, it is time to make soup.  Some people- tragically, I think- boil a chicken carcass with all the leftover meat on it, then pull the remaining pieces off and add it back into the stock to make chicken soup.  Once boiled, those bits of meat have little nutrition left to offer.  And they’re pretty chewy and flavorless.  Thus, it is best to pull the meat off before you boil the carcass and use it for the second meal, above, or add it back only after the bones have been boiled separately to make the stock.

Enjoy, knowing you’ve made the most of your chicken!

Shannon Hayes is the author of the newly released book RADICAL HOMEMAKERS: Reclaiming Domesticity From A Consumer Culture. Hayes works with her family on Sap Bush Hollow Farm in Upstate New York.  This  piece is excerpted from her fourth book, Long Way On a Little:  And Earth-Lovers Handbook for Enjoying Meat, Pinching Pennies and Living Deliciously. Visit Sap Bush Hollow Farm.