Home » Posts » Tracing Broccoli: The Journey from Seed to Table

Tracing Broccoli: The Journey from Seed to Table

This green plant is a window into better understanding food production and distribution at the Hudson Valley Farm Hub.

In the spring of 2019, the Hudson Valley Farm Hub began following several trays of broccoli on camera as a window into the process of growing vegetables — from production to distribution.

While production is a process that can be broken down into predictable parts, there remain the constant wildcards of Mother Nature and shifts in weather. And so it was with broccoli.

Out of the 20 different vegetables planted on 30 acres in 2019, broccoli occupied a total of 7.5 acres. Compared to other vegetables at the farm, it had a relatively lengthy growing season; from March through November. The five varieties of broccoli were all planted using a “high density” technique — a first for the Farm Hub. As Jeff Arnold, vegetable production manager, explains, this method produces smaller heads than in a traditional system, but because there are more plants per acre, the overall yield tends to be higher. The decision to grow high-density broccoli was partly to combat hollow stem, a defect that can be caused by nutrient imbalances and environmental factors. The result leaves a visibly empty tunnel in the flowers’ stem. Depending on the cause, tighter plant spacing can remedy the defect. The Farm Hub had wrestled with hollow stem for several growing seasons and finally saw a dramatic reduction in 2019.

But the past growing season was not immune to curveballs. Broccoli’s early success (the plants that were seeded in early spring and harvested in early summer) was overshadowed by later plantings that were affected by Black Rot and Downy Mildew — two pathogens that can be devastating in biological systems. These bacterial and fungal diseases, common enemies of the brassica family, emerged in July. The pathogens can be spread by weed seeds, wind, and splashing rain, and this year, some of the broccoli at the Farm Hub was hit particularly hard due to the high-density planting. Organic control options for these diseases are limited and largely ineffective. Plants are infected early in life and if environmental conditions favor the disease, the heads that develop can become deformed and unmarketable. 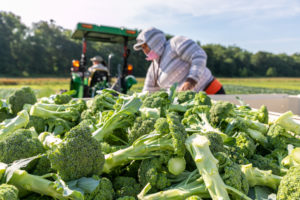 In addition to disease avoidance, the right temperature is critical to a successful harvest. Broccoli is especially unpredictable when it comes to temperature. It prefers a window of 50 to 70 degrees and thrives in regions with cooler climates.

On a positive note, the harvests in early summer were robust, and boxes of perfect broccoli from that part of the season were transported from the wash and pack facility at the farm to food pantries and soup kitchens in Ulster County.

The trays of broccoli that we followed on camera were harvested, moved to the wash and pack, and picked up by folks from the CCE-Orange County’s  Gleaning/Food Access program that distributes produce to the Hudson Valley Food Bank and to local food pantries, soup kitchens, and community organizations. Soon after, the broccoli was trucked to The Putnam Valley Community Food Pantry and distributed to over 40 families.

Countless factors can determine the success and failure of a crop. Ultimately, the season ended on a positive note with a mostly healthy crop of broccoli. The broccoli was processed for donation and also sold at the Kingston YMCA winter market. The field was mowed and disked in on Veterans Day to make room for a blanket of cover crops.

The Farm Hub will continue to grow broccoli. Last year’s growing season remains an important learning lesson as growers and researchers seek to find ways to manage disease. This spring, the Farm Hub will host a trial by Cornell University researchers which will test the effectiveness of a range of bio-rational pest controls in broccoli production (see separate story on research trials). 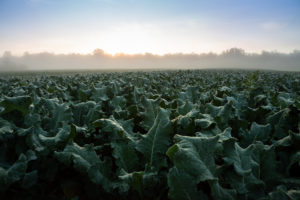 A field of broccoli at dawn. Courtesy of Hudson Valley Farm Hub

Even if there is hollow stem, Arnold says the broccoli is sellable and edible since the problem is cosmetic and it can be sold as crowns or as florets.

“We are going into it knowing that there may be some hollow stem, but the reduction in disease will be well worth it,” says Arnold.

Soon the sounds of the whir and grind of the seeder will fill the greenhouse, the seeds will find a temporary home where they are watered and soak in the light that filters through the opaque greenhouse. In a few weeks the wagons will be packed with a matrix of trays where the tiny plants will acclimate to the natural elements before being planted out in the field. A new cycle begins again.

This article is republished from the Hudson Valley Farm Hub.

Amy Wu is the communications manager at the Hudson Valley Farm Hub where she oversees the content for the website, newsletter and social media. She earned her master’s degree in journalism from Columbia University, and spent 24 years as a professional journalist including in Salinas Valley, California where she reported on agriculture.
Posted in Small Farms Quarterly, Vegetables
Scroll To Top