Save Money with DIY Hay Feeders

Sharing the design of hay feeders for round bales and logistics of feeding hay to sheep in the winter. 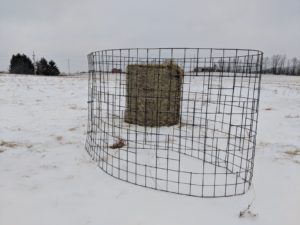 My current design of a hay feeder, made from a goat panel. Ulf Kintzel / White Clover Sheep Farm

Various companies offer round bale hay feeders for sheep. They all have one characteristic in common: they cost a lot of money. I have been using self-made hay feeders made from livestock panels for two decades. I received the original idea more than 20 years ago when I went to a Polypay sheep breeder in Vermont at the banks of the Connecticut River. I’d love to give him credit, but his name has escaped me and I cannot find a listing of his farm. I refined his design over the years. I abandoned some designs as well, and they too will be part of this article.

Many of you are likely familiar with a feedlot panel, these are the base of my design. It might be called livestock or cattle panel at your farm store. Such panel is 16 feet long by 48 or 50 inches high, and costs about 20 dollars. The mesh measures usually four inches horizontally and eight inches vertically. The bottom may have narrower rows of mesh. I cut staggered holes in the panel. This will amount to three rows with holes that are eight by eight inches. I use a disc grinder to cut the wholes and then smoothen the rough edges with the same. I then bend the panel that both ends touch each other. I use three three-inch snap ring hooks to connect the ends and the feeder is done. (I used to use smaller hooks but found out they bend too easily when they are under pressure and are also hard to open when you want to open the feeder with hay still in it.) I now have a feeder that costs about $30, which is far less than the several hundred dollars that most round bale feeders cost. 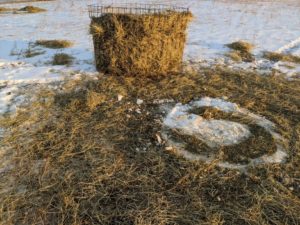 A hay feeder with half a bale tipped over and the wasted hay around the previous spot spread out. Ulf Kintzel / White Clover Sheep Farm

You can then open the feeder up and put it around a round bale that is sitting on its flat side, or you can leave it closed and lift the feeder over the round bale. If your bales are net-wrapped, I recommend removing the net prior to putting the feeder around. If they are held together with bale strings you can go either way. Initially, when the bale is just set up, the sheep can eat basically at all places throughout the mesh. As they dig deeper into the bale, the better portions of the hay become available only when a sheep puts its head into one of the eight by eight holes. My large-headed Texel sheep that I raised twenty years ago got their heads stuck on occasion, especially when two sheep tried to feed through the same hole. That has not occurred since I have White Dorper sheep. When about half or two-thirds of the bale is eaten, the better parts of the hay become less accessible. Since my sheep are grass-fed and I wish to encourage consumption, I flip the bale over by flipping the entire feeder over with the bale inside it. Now the remainder of the bale is likely to sit slanted in the feeder, which makes the better parts of the remaining bale available again. Also, there is waste — I estimate up to ten percent. The waste is mostly the stemmy parts of the hay. If I feed hay in the barn, I use that waste as bedding. Straw, the bedding I would prefer, is too expensive in my area and more expensive than first-cutting hay.

When the weather and soil conditions allow, I prefer feeding my hay outside in the pasture. Manure and especially urine, when it is directly deposited to the pasture as opposed to spreading manure form the barn, have more value that way because fewer nutrients are lost. Whenever I feed hay outside in the pasture, there will be some wasted hay piled up around the feeder. I always distribute that hay with a fork so that it doesn’t choke out any pasture when it starts growing in the spring. I also use a new spot for each new hay bale, that way nutrients are as evenly distributed as possible. I favor feeding hay in those parts of the pasture where I will make hay in the coming season or that are well-protected from the elements when it is cold and windy. Any hay the sheep pull out of the feeder without eating it is not actually wasted. It is adding nutrients to the soil and increases organic matter. While the wasted hay would have had optimum value had it gone through the animal first, it still has plenty value by being fertilizer. 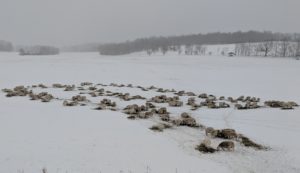 The flock is feeding on hay that is spread out on frozen and snowy ground while I set more round bales in feeders in the barn. Ulf Kintzel / White Clover Sheep Farm

One could argue that professionally built hay feeders waste less hay. Here is what I know: When I went to agricultural college in Germany back in the early 1990s, I read up on a field trial with round bale feeders for sheep. No matter the price or design, none of them reduced waste so significantly that it justified the high price. As I recall, most of them wasted about eight to ten percent of hay. Many of them have the same or similar design still today, which are vertical bars only with no horizontal cross bars and no mesh. It is very easy for sheep to pull the hay through and waste a significant part of it. I think it is unlikely that there is less waste than with my self-made ones.

When feeding hay outside and you have heavy soils, be careful when it is wet in the spring and the soil is losing its structure and cohesiveness. It may lead to pugging around the feeder. In that case, I will either feed in the barn or I will set the bales in the woods or in a spot where pugging is not an issue. However, pugging is something that I cannot always avoid entirely. This should not be a concern when you have sandy soils.

The light weight of the feeders is an advantage. It allows for a lot of flexibility when I want to move 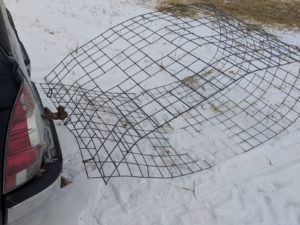 The empty feeder can be pulled easily with the truck. Ulf Kintzel / White Clover Sheep Farm

them around. Sometimes, I just tip a feeder with a bale in it over, pick it up with the front spear of my tractor, and move the feeder to a new spot when there is danger of pugging or when it is supposed to rain, and I wish to move the feeder in the barn. Empty feeders can be laid on the side and puled with the trailer hitch of a truck to a different location.

I don’t have as many feeders as it takes that all animals can simultaneously eat at the feeders. That can be a problem if they are hungry. They then push at the feeders and it can lead to losses, particularly to abortions when you have sheep that are due to lamb soon or if you have young lambs and they get trampled by larger ewes. Therefore, I try to not let the sheep go hungry and have always enough hay available that not all of my sheep feel compelled to eat all at the same time. Sometimes they do eat almost all hay that is in the feeders before restocking it. In that case, I run the tractor with a bale on the back spear and spread a bale out in dry or frozen or snowy spots in the pasture. That reduces the risk of soiling the hay, followed by setting up feeders with hay. I always keep the sheep away from the hay when I feed it that way until I am done. When I then let the sheep to the hay after spreading it out, they too spread out and eat the hay that is on the ground and some feed at the feeders. By the time they are done with the hay on the ground, they no longer are likely to push at the feeders and many will be full. 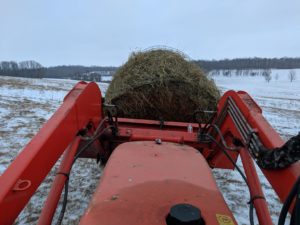 Moving the feeder with a bale in it to a different location because a snow storm is coming. Ulf Kintzel / White Clover Sheep Farm

There have been significant changes in the production of the livestock panels in the last two decades. Twenty years ago, they were sturdy and lasted a long time. Then they became flimsier. When I now bend the ends together and attached my hooks, pieces of wire just snap off after just a few months. I investigated alternative designs. Most farm stores also offer goat panels. They are the same length and height, but the mesh is four by four inches. Although made from the same gauge wire, the design is much sturdier. I assume this is because the points of welding are more numerous and closer together. I made feeders using the same design of three rows of staggered eight by eight-inch holes, just that I had to cut more wire to get the same-sized holes. I have some of these feeders that are several years old and they are holding up well. There are three disadvantages compared to my previous design: 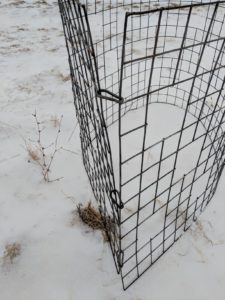 View of the snap ring hooks that connect the ends of the panel. Ulf Kintzel / White Clover Sheep Farm

I also use a third kind of hay feeder. The old hay feeders made from the cattle panels that were broken often had large sections in them that were still good, especially in the areas that weren’t bent too much. I cut out the good sections that were between four feet and five feet long. I laid them on the ground and rolled carefully over them with my tractor until the were flat again. Then I used the same hooks and connected two panels with three clips — bottom, center, and top — and connected four panels that way. I purchased some wire connector hinges but found no advantage to them compared to the clips.

What is the downside of my self-made feeders? The life expectancy is limited. They will not last a lifetime. Looking at the design of feeders that are welded and of heavy steel, I suspect such feeder will last quite a few years longer. Of course, that comes at a cost.