A new and significant threat to forests, Asian earthworms, have cleverly disguised themselves — as earthworms.

If you’re tired of hearing about new invasive forest pests, I’m with you. Seems they arrive at an ever-increasing pace, and the harm potential ratchets up with each newcomer. At this rate, maybe we’ll get a wood-boring beetle whose larvae explode inside tree trunks. As distasteful as it may be to learn who’s next in the queue, we all realize it’s better to know what we’re up against.

While some new pests such as spotted lanternfly are fairly conspicuous, a new and significant threat to forests, Asian earthworms, have cleverly disguised themselves — as earthworms. The fact that we are used to seeing worms in the landscape makes them a challenge to notice, but it is well worth the effort.

The new pests are three related species of earthworms from East Asia — Amynthas agrestis, A. tokioensis, and Metaphire hilgendorfi — all of which are established in New York State. Known variously as Asian jumping worms, Alabama jumpers, snake worms, crazy worms, and probably some ch 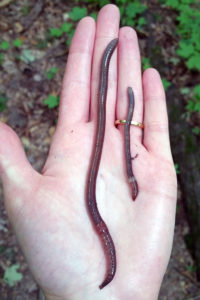 oice expletives, these super-sized (8” when mature) annelid cousins look very similar to one another. In fact, they can only be accurately separated by species through dissection, so I think it’s fair to consider them as a group.

Asian worms can be identified by the smooth band called a clitellum, which in European earthworms is dark, close to their middle, and thicker than the rest of the body. In these Asian worms it is milky-gray to white, and much closer to the head. It is generally flush with the body as well. Behavior is another clue: when disturbed they scatter across the ground, snake-like, rather than disappear into the soil. If touched, they thrash wildly and may shed their tail. They feel drier than other worms, and more turgid.

One issue with Asian worms in the forest is that they have a high reproductive potential, with two or sometimes three generations per season compared to just one for European worms. The latter are hermaphroditic, having both male and female organs, but they still require a mate. Asian worms are parthenogenic, all females who bypass the need to find a mate, and spew out cocoons teeming with baby female worms. All it takes is one to start an infestation.

As with any recent pest, Asian worms have not been well-studied. Even the modest research which has been done can conflict at times. It is known that adult Asian worms die off in winter, but that their cocoons are cold-hardy. I have read figures which place the hardiness cutoff around -30 degrees F, and other references to the limit being -40 degrees F or colder. The point is, no part of NYS is too cold for these things. And based on research done by Josef Görres at the University of Vermont, cocoons can remain viable in the soil for at least 3 years, analogous to a soil seed bank.

By the end of summer, Asian worm biomass is many times that of other species. This means they eat a lot, primarily on the surface and within the top one inch of soil. Research done in 2016 at the University of Wisconsin-Madison found Asian worms reduced leaf litter in hardwood forests by 95 percent.

Not only do Asian worms leave soil bare, they leave it barren. Breaking down detritus incredibly fast leads to a big increase in plant-available nitrogen late in the season, when few plants can use it. Nearly all these nitrates leach out of the soil by spring. The soil also loses its healthy structure, becoming granular, and much more vulnerable to erosion and compaction.

In addition to their huge appetites for organic matter, Asian worms are known to vastly increase lignin-busting enzymes. At this time, it is unclear whether the worms secrete the enzyme, or a substance which induces white-rot fungi to ramp up production. As a result of this effect, wood breaks down at least 2.5 times faster in the presence of Asian worms. It is also not known what effect this has on tree seeds.

In the face of an Asian worm infestation, other changes in hardwood forest ecosystems occur. European earthworms disappear, as do millipedes and other invertebrates, though no one yet knows the mechanism by which this happens. The numbers of juvenile and male salamanders also drop at infested sites. 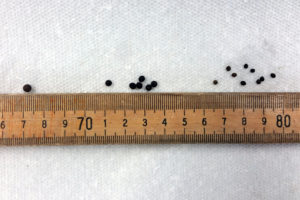 These invaders have few predators. Raccoons, opossums, moles, and centipedes find them tasty. Many amphibians feel otherwise. Wisconsin Department of Natural Resources Invasive Species Specialist Bernadette Williams, who essentially broke the whole Asian worm story, told me in a 2014 phone interview that she observed a salamander grab an Asian worm, then release it and spend the next 10 minutes wiping its mouth on the soil.

I doubt anyone needs convincing that Asian worms need to be taken seriously. Bernadette Williams put it bluntly: “Their [Asian worm] introduction into our state poses a huge threat to the future of our forests.”

So where to go from here? Asian worms are commonly spread through the horticulture trade, both in containerized plants, and especially mulch, which they love. Paw through bulk mulch before purchasing, and maybe think twice about getting fill delivered to your property. Where reforestation is concerned, it is safer to plant bare-root stock than plugs.

Equipment may pose the biggest threat to forest land, so be cautious. Before a logging crew shows up at your place, find out where their last job was. Skidders, forwarders and trucks coming from a known infested site may need to be steam-cleaned to protect your land.

If you’re in an unfamiliar woodlot during the summer or fall to mark timber, or just out for a walk, turn over a log or flat rock. Do the worms dive down, or scoot out in all directions? If the latter, be sure to notify the owners, as well as any crews working on that parcel. Asian worms are most likely to be found at log landings and along skid roads. Clean all dirt and debris off your boots, and preferably disinfect them as well, before getting in the vehicle to return. Worm cocoons are brown spheres about 2 mm. in diameter, and very easy to take home with you. A little prevention goes a long way in protecting our forest resources.

Paul Hetzler is an ISA-Certified Arborist, and a member of the Canadian Institute of Forestry and the Society of American Foresters. Before moving to Canada in September 2019 he was the Natural Resources Educator for Cornell Cooperative Extension of St. Lawrence County. His book “Shady Characters: Plant Vampires, Caterpillar Soup, Leprechaun Trees and Other Hilarities of the Natural World,” is available on amazon.com.
Posted in Small Farms Quarterly, Soil Health
Scroll To Top