In the News: Rep. Delgado Praises the Farm Ops Program 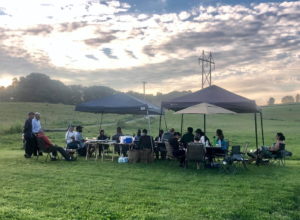 The Farm Ops project of the Cornell Small Farms Program provides expertise and community for veterans interested in agriculture across New York State. Connecting veterans with the Armed to Farm conference is often a first step in providing agricultural training and farm tours. If veterans want to make the transition into farming, the Cornell Small Farms Program provides a central location to the project with Marine Veterans Dean Koyanagi and Shaun Bluethenthal heading up Farm Ops.

Grants, workshops, reduced rates for online classes, regional networking, and other resources all aid farmer veterans throughout the state. Several recent articles have noted that these efforts were praised by U.S. Rep. Antonio Delgado.

Delgado, who represents New York’s 19th Congressional District,  visited Sheffer’s Grassland Dairy Farm in Hoosick Falls, NY, where he met with members of the Farmer Veteran Coalition and representatives from Farm Ops and project partners Heroic Food, the Farm Bureau, and Cornell Cooperative Extension. Afterward, he spoke with several members of the press about the importance of the work done by the program, and hopes to expand or create similar programs nationwide.

Delgado talked about the benefits of the program to veterans, “[A veteran] came home after surviving a tremendous bout with injuries sustained in combat and was looking at how to find peace of mind, to work in a place that gave him some mindfulness and allowed him to have work that was disciplined, but also allowed him to get away. He found farm work incredibly helpful for him in a host of ways.”

The congressman also noted the benefit of the program to farmers. He discussed how farmers have told him it is hard to find people with the discipline and work ethic needed to do the job day in and day out, and that veterans have those qualities.

Several media outlets reported on both Rep. Delgado’s recognition of the Farm Ops program and the work done by the Cornell Small Farms Program:

Veterans and farmers can make an ideal team, Hudson Valley 360

Kacey is the Cornell Small Farms Program’s communications specialist. In this role, she manages all storytelling and outreach across the program’s website, social media, e-newsletter, magazine and more. Kacey has worked in communications and journalism for more than a decade, with a primary focus on science and sustainability.
Posted in News and Updates