Rotational Grazing: How Often Should I Rotate?

Failure in grass-fed sheep enterprises is still very common. I hear about it often since I am the one being asked why it failed. Among the many reasons why grass-fed sheep operation failed is the misconception of the frequency of pasture rotation. When breeding stock I have sold is picked up from my farm, the buyers often want to know how I do it. Some of these buyers who already have sheep are convinced they are doing rotational grazing. I follow up with the question how often they rotate. Rarely do I hear a number between one and five days. Almost always do I hear about a rotational schedule of a week and more. It then comes to those folks’ surprise when I unambiguously state that this is not rotational grazing.

When grass has been grazed, it starts re-growing after a certain number of days. At some point, this regrowth becomes desirable enough for sheep to be grazed again. The moment that occurs, the moment the sheep graze this regrowth, the pasture rotation no longer qualifies as rotational grazing. While grass grows back with different speed at different times of the year and again under different conditions, the magic number for re-growth is one week. Any rotational schedule beyond one week does not qualify as rotational grazing. That means a rotational schedule should be less than one week. The number of days for each rotation that successful grass farmers practice varies between three to five days and all the way down to a twice-a-day rotation. 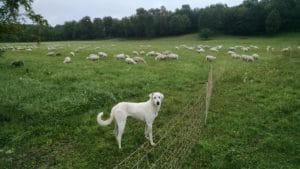 Let’s start with a three to five-day rotation and let’s see what happens with each passing day of grazing that cell. The first day you let the sheep into the pasture, they will selectively graze what tastes best. On day two they are likely to still have plenty desirable plants to eat. On day three these plants are now scarce or gone and less desirable plants must be grazed. They will graze them, but intake is down. In addition, they will start taking down the desirable plants a little more, making it harder to leave enough residual – a key issue for successful grazing – in all places. Day four or five leaves only less desirable plants. While the sheep will now get a little hungrier and are more willing to eat them, intake is still down. Perhaps your grazing cell was so large, that this grazing pattern did not quite apply, that desirable plants lasted for three or four or even five days. That in turn means that undesirable plants were not eaten, and that animal pressure was not high enough. This would not be sustainable to maintain a pasture with predominantly desirable pasture species and it will most definitely not be sustainable if you are paying a mortgage and property taxes on the land you graze.
Once a day rotation means you have exactly the amount of forage in the pasture that the sheep should have that day while still leaving the desirable four inches of residual. Due to a higher grazing pressure, grazing is less selective. Undesirable plant species are eaten more willingly. It is a well-established fact. Being able to graze less desirable plant species is good since you utilize more of your pasture. Manure distribution is also more even. However, it is anything but easy to gauge the right size of a grazing cell for just a day. Some of you may also know rotational grazing under the name management-intensive grazing, or MIG. Jim Gerrish, a well-known advocate for it, takes credit for having coined that term. Those who know him or have listened to him will also know that he is not getting tired of pointing out that the “intensive” part of MIG refers entirely to the management and not at all to the grazing. After having practiced rotational grazing or MIG for decades, I can assure you that the management is indeed intensive. It is not simple and the wheels in your head will have to keep turning daily for as long as you practice this way of farming.

Since I had my exterior woven wire fence completed and have the whole farm fenced in, I have been practicing a once daily pasture rotation using my electric nettings. Prior to it, my pasture rotation was on average two to three days. A rotation of four or five days did occur at times. A daily rotation was not possible for me because of the amount of electric nettings I would have had to erect and take down again. The permanent exterior fence made it possible. I can clearly see the benefits of a daily rotation compared to one every several days. The pasture is grazed more evenly. Undesirable plants are eaten more readily. Manure distribution is more even. Intake is high. Residual is better managed. What is the “downside”? It requires constant and continues thinking. There is no break ever during grazing season.
A twice-daily rotation is very stringed. It is “easy” when you are a dairy farmer. You are already moving the herd out of the pasture in the morning for the first milking of the day. You might as well put them in fresh pasture afterwards. When producing milk, a rotation twice a day makes perfect sense. You see the difference in the milk tank. It is a little different for grass-fed sheep when you produce meat. You must make an extra effort to rotate a second time a day. The additional benefit – if any – is marginal for meat production, but the extra effort is anything but marginal. I have not found that extra effort beneficial enough to practice it. I continue doing a once daily rotation.

Research has conclusively shown that you get more production of your land when you rotate frequently. The amount of increased production is significant. So, focusing on management and rotating frequently has a real impact on the tonnage grown in your pasture, on the animals you can graze per acre, and therefore on your wallet. I encourage you to go for a two to three-day rotation and perhaps even for a daily rotation. It is well worth it.

Ulf owns and operates White Clover Sheep Farm and breeds and raises grass-fed White Dorper sheep and Kiko goats without any grain feeding and offers breeding stock suitable for grazing. He is a native of Germany and lives in the US since 1995. He farms in the Finger Lakes area in upstate New York. His website address is www.whitecloversheepfarm.com. He can be reached by e-mail at ulf@whitecloversheepfarm.com or by phone during “calling hour” specified on his answering machine at 585-554-3313.

Kelsie is from southwest Missouri and grew up on a 150-acre farm helping her family buy and sell horses and cattle. She credits FFA for finding her passion for agriculture and food issues and desiring a career as an “agvocate.” Since coming to Cornell, she has gained interest in local production, global food issues, and environmental impacts of and on agriculture. She joined the Cornell Small Farms Program in May of 2018 and is excited to gain experience to complement coursework in the Agricultural Sciences major and Communication major.
Posted in Livestock & Dairy, Small Farms Quarterly, Stewardship, Tools & Technology