Home » Posts » More Than a Matter of Taste

More Than a Matter of Taste

By Fred Provenza
This excerpt is from Fred Provenza’s book Nourishment: What Animals Can Teach Us About Rediscovering Our Nutritional Wisdom (Chelsea Green Publishing, November 2018) and is reprinted with permission from the publisher. 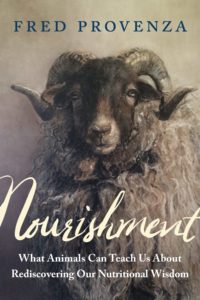 Liking for foods is typically thought to be influenced by palatability. Webster’s dictionary defines palatable as pleasant or acceptable to the taste and hence fit to be eaten or drunk. Animal scientists usually explain palatability, though, as a liking influenced by a food’s flavor (odor and taste) and texture, or the relish an animal shows when eating a food. Plant scientists describe palatability as attributes of plants that alter an herbivore’s preference for consuming them, such as physical and chemical composition and associated plants.

Redefining Palatability
I had begun to ponder these questions about what influences an herbivore’s food choices while observing the perplexing behavior of the goats in St. George: Why didn’t the goats prefer the younger more nutritious twigs of blackbrush over older, woody, less nutritious blackbrush twigs? As it turned out, the goats helped me understand their anomalous behavior.

My colleague Beth and I began with a series of trials in which we extracted and purified secondary compounds from young twigs, mixed each purified extract individually with a pelleted food, and offered the “flavored” pellets to goats one laborious trial at a time. We did the trials during fall and winter, with no sign that any of the compounds deterred feeding by the goats. By midwinter, only one compound remained to be tested—a condensed tannin plentiful in the bark of new twigs. By process of elimination, we figured, this tannin must be the feeding deterrent.

On the first morning of the final trial, the goats ate all of the tannin-infused pellets. We were surprised and bewildered. We had tested every comp ound that might have made the goats averse to eating new blackbrush twigs, and the goats had eaten every one. How could they be so averse to eating new growth when none of the secondary compounds we’d extracted had any effect? Not only that, but at the rate the goats ate the tannin-containing pellets the first day, we had only enough tannin-containing pellets left to conduct one more trial. We’d spent months of hard work collecting twigs and then extracting and purifying that condensed tannin. We didn’t know what to do. As we pondered the situation that cold winter morning, we decided all we could do was feed the tannin-containing pellets again the next day.
Incredibly, when we offered the pellets the following day, the goats wouldn’t touch them. On this second exposure to pellets high in tannins, the goats had somehow changed their preference. It wasn’t a question of merely responding to flavor. If the goats had disliked the flavor of the tannin-infused pellets or innately recognized the pellets as something that would make them sick, they wouldn’t have eaten them so enthusiastically on the first day. At that aha moment, we realized goats didn’t innately know high-tannin pellets—or new blackbrush twigs—were bad for them. Rather, they had to learn from aversive postingestive consequences. In other words, it took a queasy stomach (nausea) to teach them not to eat foods with tannins.

To confirm that hypothesis, in a subsequent trial, we supplemented goats foraging on Cactus Flats with a small amount of polyethylene glycol, a compound that binds to tannins in the gut, alleviating their aversive postingestive effects. Goats supplemented with polyethylene glycol don’t experience the nauseating effects of tannins in blackbrush. With the deterrent effect neutralized, those goats were free to choose, and they preferred new to older growth twigs based on the higher energy, protein, and mineral content of the new twigs.

At that time, we were also studying how lithium chloride causes food aversions in sheep. Lithium chloride—once used as a substitute for table salt and to treat manic depression in humans—in excess conditions a food aversion in animals. Following the findings with blackbrush, we decided to repeat the trials with lithium chloride, but on goats as well as sheep. Sheep and goats who receive a capsule of lithium chloride acquire an aversion to any forage they ate just prior to receiving lithium chloride. Like humans, an upset stomach doesn’t necessarily cause an aversion in goats or sheep, but nausea does. At the dosages we were infusing, neither the sheep nor the goats showed any overt signs of illness. Yet, the following day they avoided the food they’d eaten just prior to receiving the lithium chloride.
Though conditioned taste aversion was of key importance in psychobiology, until the study with goats and blackbrush, neither we nor other scientists had a clue that secondary compounds in plants were communicating with cells and organ systems in herbivore bodies, providing feedback that changed liking for the flavor of a particular food. Rather, we had thought animals instinctively avoid foods that taste bad and choose to eat foods that taste good. During the next forty years, with this new understanding dawning, the research group I supervised carried out hundreds of studies that illustrated how likes and dislikes for the flavors of foods are caused by postingestive feedback emanating from cells, organ systems, and gut microbes.

Secondary compounds set a limit on how much of any one food an animal can eat. Thus, animals must eat a variety of plants that contain different secondary compounds, detoxified by different means in the gut and liver, in order to meet needs for energy and protein. Cattle who forage on high mountain pastures select from a smorgasbord of plants, including larkspur, which contains toxic alkaloids. How much larkspur a cow will eat during a meal varies from day to day. Cattle recognize when they reach a toxic threshold and they stop eating larkspur for the next few days. That allows time to detoxify and eliminate those toxic alkaloids from their bodies.

Infusion studies with terpenes from sagebrush also show the sensitivity of herbivores to feedback. Terpenes give sagebrush its characteristic fragrance. Like any primary or secondary compound, in appropriate doses, terpenes are beneficial for health, but when the dose climbs too high, they become toxic. While elk, deer, cattle, and sheep use sagebrush as a nutritious forage in winter, terpenes limit their intake of sagebrush in accord with the amount of terpenes these herbivores can detoxify and eliminate from their bodies. When terpenes are slowly infused into the rumen or the bloodstream as sheep eat a meal, sheep stop eating before the amount of infused terpenes reaches a toxic level. They resume eating only after terpenes in the body decline.

In the early years of those studies, I was amazed that administering primary or secondary compounds directly into an animal’s gut (or bloodstream) could markedly alter that animal’s liking for the flavor of a food. It was counterintuitive to my experience of eating and to all I’d been taught about how taste influences preference. To further complicate matters, ruminants—including cattle, sheep, goats, elk, and deer—are walking compost heaps. They have four-chambered stomachs, and the rumen is a huge fermentation vat that contains mixed plant material being digested by thousands of species of microbes. How could signals from primary and secondary compounds not be lost in such a heap of fermentation? Over and over again, though, goats, sheep, and cattle showed us that the signals weren’t lost in the rumen.

Fred Provenza is professor emeritus of Behavioral Ecology in the Department of Wildland Resources at Utah State University, where he directed an award-winning research group that pioneered an understanding of how learning influences foraging behavior and how behavior links soils and plants with herbivores and humans. Provenza is one of the founders of BEHAVE, an international network of scientists and land managers committed to integrating behavioral principles with local knowledge to enhance environmental, economic, and cultural values of rural and urban communities. His latest book Nourishment: What Animals Can Teach Us About Rediscovering Our Nutritional Wisdom will be published in November 2018.

Kelsie is from southwest Missouri and grew up on a 150-acre farm helping her family buy and sell horses and cattle. She credits FFA for finding her passion for agriculture and food issues and desiring a career as an “agvocate.” Since coming to Cornell, she has gained interest in local production, global food issues, and environmental impacts of and on agriculture. She joined the Cornell Small Farms Program in May of 2018 and is excited to gain experience to complement coursework in the Agricultural Sciences major and Communication major.
Posted in Livestock & Dairy, Small Farms Quarterly