In the previous four installments of this series on chainsaw operation we have looked at some of the myriad rules for safe and efficient chainsaw operation. We have looked at the protective gear that is needed by an operator, the safety considerations with the use of the chainsaw itself, and some of the training that is available for chainsaw users.  In this final installment, we will look at the actual felling of a tree. 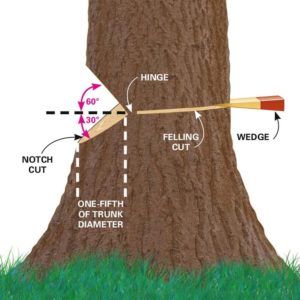 Some of the key points to make cuts to safely fell a tree. (see edit to original caption below)

Safety is always of paramount concern when felling trees and the statistics bear this out, in that logging is the most hazardous occupation in the United States.  Granted, much progress has been made in recent years, with more and more safety training and certification of loggers being demanded.  However, many of the readers of this publication will not be professional loggers and oftentimes slip through the cracks with little or no formal training in the safe use of chainsaws.  An important focus of this article will be on the use of the correct felling notches to use, which in recent years has changed dramatically.
Now that we have arrived in the woods to fell trees, what are some of the precautions that we should take?  First, you might consider having someone else nearby so that if anything bad occurs, that second person can summon help. The presence of a good first aid kit with a blood clotting sponge and trauma kit is imperative to have nearby as well, as well as a fully charged cell phone on your person. 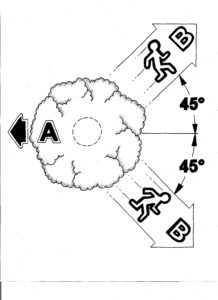 We need to look at the tree that we are going to fell, and  make sure  that there are no “widow makers” in or near that tree; widow makers are dead branches high overhead that can easily come crashing down on you. If they are present, go on to another tree! You also don’t want a tree to be near any power lines, houses, or other buildings. If the tree in question is near buildings, perhaps it would be more prudent to hire an experienced arborist or tree surgeon, rather than “your buddy from work” who happens to own a chainsaw. (Try explaining to your neighbor why there is a tree on top of their house or vehicle that you or “your buddy” just dropped it onto; there will be red faces and lots of liability all around!). You also need to clear any brushy stems in your felling area that might get tangled up and trip you, or catch on your clothes and impede your escape when the tree begins to fall.
You will need to have a clear escape route to move to when the tree begins to fall, at about a 45-degree angle to the tree away from the felling direction. You do not want to be moving away from the falling tree in a straight line in the direction that it is falling; trees have been known to kickback off the stump and kill and injure people.  This brings us to the crux of this article, the felling notches to be used.

One of the included illustrations shows the long used, but now obsolete conventional felling notch, which should be replaced with open faced notches.  Many publications still show this obsolete and unsafe notch, and is used by many people in practice, even in this modern era of new and better information available such as from “The Game of Logging”. What is wrong with this notch? The problem is that this notch oftentimes allows the tree to hang up on the notch when it falls to the ground, resulting in the tree still in the air and incompletely fallen.

The open face felling notch is part of the method known as directional felling, and was promulgated by the world-renowned Soren Ericson, who brought much of these newer and more efficient felling methods to North America from Europe.  These methods have been adopted by the forest products industry all over.  The open face notch has now replaced the conventional notch, and the illustrations show the gist of the details.  Directional felling allows you to control exactly where the tree will fall, but does take a bit of training and experience to become competent in its methods.

Directional felling, which uses a “plunge” cut and wedges to better control the safe felling of a tree.

The safe felling of a tree using an open face notch consists of making three precise and strategic cuts; the top cut, the pluge cut, and the back or felling cut. Felling wedges can then be used during the final cut to assist the tree in beginning to fall. Once the tree starts to fall, you move away from the tree at the aforementioned 45-degree angle as shown in the image. This technique is very safe once learned, but takes some dedicated practice to get it right.
What do we do if the tree hangs up, and doesn’t make it to the ground?  This is where a logging winch mounted to a tractor comes in handy; and is much safer than just putting a chain around the tree and pulling it down with a tractor or other vehicle. The cable on the winch allows you to get a good safe distance away from the tree for when it does fall.  Oh, by the way, the only people who never get trees hung up are those who never fell trees the right way.

In conclusion, I strongly suggest that anyone who uses a chainsaw to attend a Game of Logging session; they are held frequently and all over the Northeast.  Fell away, but be safe!

Rich Taber (M.S./M.S.F.)  is an Educator with Cornell Cooperative Extension of Chenango County New York, and  also owns a 165 acre  farm in Madison County in the Hamilton/Morrisville area where he and his wife Wendy raise beef cattle, sheep, poultry, and enjoy their 105 acre woodlot.  He can be reached at 607-334-5841, ext. 21, or rbt44@cornell.edu.

Information about the “Game of Logging” can be found at their website, or the NY State Center for Agriculture Medicine and Health.

NOTE: The caption for the first image was changed. Here is more detail on some considerations for a correct felling notch from State Extension Forester Peter Smallidge:
“The picture aboce shows a face cut (left side of tree) that is legitimate.  The key is that the opening is 70 degrees.  Game of Logging teaches that the bottom shoulder of the cut is horizontal so that the feller can position the saw’s bar on the shoulder and then move into the plunge cut.  The pictured opening would be fine if the plunge cut is horizontal and occurs behind the apex of the notch.
The “old and dangerous” method, as noted on the pictures below, emphasizes a specific depth of the notch rather than width of notch, and illustrates “chasing the cut” by starting on the back side of the tree.” 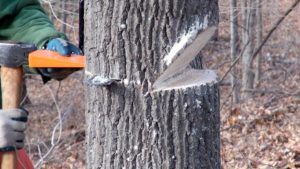 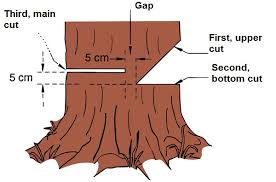 Kelsie is from southwest Missouri and grew up on a 150-acre farm helping her family buy and sell horses and cattle. She credits FFA for finding her passion for agriculture and food issues and desiring a career as an “agvocate.” Since coming to Cornell, she has gained interest in local production, global food issues, and environmental impacts of and on agriculture. She joined the Cornell Small Farms Program in May of 2018 and is excited to gain experience to complement coursework in the Agricultural Sciences major and Communication major.
Posted in Forestry & Agroforestry, Small Farms Quarterly