Home » Posts » Call the Dogs Off the Lions

Call the Dogs Off the Lions

Be nice to dandelions, “the official remedy for everything.” 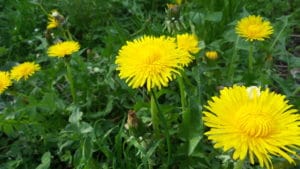 April showers bring May flowers, but not all posies are a welcome sight. Although it is quite possible they arrived on the Mayflower, dandelions do not get the esteem they deserve as plucky immigrants that put down firm roots in a new land, vitamin-packed culinary delights, and multipurpose herbal remedies.

On this latter point, dandelion is so well-respected that it garnered the Latin name Taraxicum officinale, roughly the equivalent of “the official remedy for disorders.” There are many reported health benefits of dandelions, including as a liver support and for alleviating kidney and bladder stones, as well as externally as a poultice for skin boils. I don’t pretend to know every past and present medicinal use of the plant, and I strongly recommend consulting a respected herbalist, as well as your health care provider, before trying to treat yourself.

That said, the Penn State Hershey Medical Center has devoted an entire web page to dandelion (found here), and it cites some peer-reviewed studies. I had previously heard that dandelion was used as an adjunct diabetes treatment, but had not found any references. However, the University of Maryland Medical Center states that: “Preliminary animal studies suggest that dandelion may help normalize blood sugar levels and lower total cholesterol and triglycerides while raising HDL (good) cholesterol in diabetic mice. Researchers need to see if dandelion will work in people. A few animal studies also suggest that dandelion might help fight inflammation.”

I’d say that’s not bad for a weed. You can buy dried and chopped dandelion root in bulk or in capsule form at most health-food stores, or you can get it for free in your back yard, providing you don’t use lawn chemicals.

Dandelion’s common name comes from the French “(la) dent de lion,” or lion’s tooth, referring to the robust serrations along their leaves. Leaves vary widely in appearance, though, and aside from their yellow mane, not every dandelion is as leonid as the next. Apparently the French have a corner on the common-name market, because the other dandelion moniker is “pis en lit,” or “wet the bed,” as the dried root is strongly diuretic. More on that later.

Dandelion greens are best in early spring before they are done flowering. Harvesting late in the season is kind of like picking lettuce and spinach after they have bolted—edible, but not at their best. If you had a few dandelions take root in your garden last year, they are probably ready to uproot and eat right now. Sort of a new twist on the phrase “weed-and-feed.” 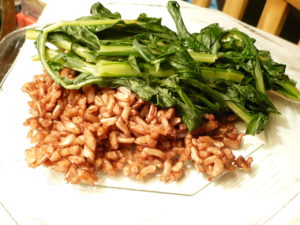 Young greens can be blanched and served in salad, or else boiled, but I like them best when chopped and sautéed. They go well in omelets, stir-fry, soup, casserole, or any savory dish for that matter.  Fresh roots can be peeled, thinly sliced and sautéed. A real treat is dandelion crowns. The reason they flower so early is that they have fully-formed flower bud clusters tucked into the center of the root crown, whereas many other flowers bloom on new growth. After cutting off the leaves, take a paring knife and excise the crowns, which can be steamed and served with butter.

Roasted dandelion roots make the best coffee substitute I have ever tasted, and that’s saying something because I really love coffee. Scrub fresh roots and spread them out on an oven rack so they are not touching each other. You can experiment with higher settings, but I roast them at about 250 until they are crispy and dark brown throughout. Honestly I can’t say just how long it takes, somewhere between 2 and 3 hours. At any rate I always roast them when I have to be in the house anyway, and check them frequently after the two-hour mark. Grind them using a food processor or mortar and pestle. Compared to coffee, you use a bit less of the ground root per cup.

The beverage tastes dandy, but as mentioned above, it is more diuretic than coffee or black tea. I have never found this a problem, but if your morning commute frequently involves a traffic snarl, choose your breakfast drink accordingly.

I have not tried dandelion wine, a tradition that dates back centuries in Europe, and so have no first-hand experience to report, but scads of recipes can be found on the Internet. Several friends and family members have tried it, with negative and positive reviews pretty well split. I have no idea if it is personal preference or wine-making skill that is so evenly divided.

Given all the virtues of dandelions, it is amazing how much time and treasure our culture puts into eradicating them. It seems to verge on an obsession with some people, who drench their lawn with selective broadleaf herbicides like 2,4-D, dicamba and mecoprop. These all come with health risks to people, pets, non-target trees, shrubs and herbaceous plants, not to mention hefty price tags.

For those who perhaps take the whole lion connection too far and can’t sleep at night if there are dandelions lurking on the premises, I’ll share a secret to getting them out of the landscape. Setting the mower to cut at four inches high will not only get rid of most weeds, it will help prevent diseases, and will greatly reduce the need for fertilizer. But, I say we stop trying to kill the only North American lion that is not in danger of extinction, and learn to appreciate and use it more.

Paul Hetzler is an ISA-Certified Arborist, and a member of the Canadian Institute of Forestry and the Society of American Foresters. Before moving to Canada in September 2019 he was the Natural Resources Educator for Cornell Cooperative Extension of St. Lawrence County. His book “Shady Characters: Plant Vampires, Caterpillar Soup, Leprechaun Trees and Other Hilarities of the Natural World,” is available on amazon.com.
Posted in Forestry & Agroforestry