The Alfalfa HoneyBees – An Observation

In Wyoming County, the drought of the winter, spring, summer, and fall of 2016 was devastating for local honeybee populations.

by Debra Welch
In Wyoming County, the drought of the spring, summer, and fall of 2016 was devastating for local honeybee populations. Fall nectars and pollens are critical for colony build-up for the winter.  If the honeybees cannot get the fats and lipids they need, survival is greatly affected. Though keepers can provide pollen patties and other honeybee feeds, these often are not enough. 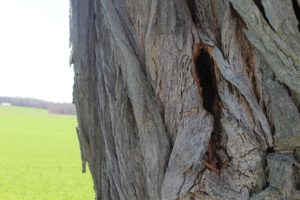 The Bee Tree in April 2017, alfalfa field in background.

Many local hobby and sideline keepers reported partial or total colony losses for the past winter and this spring.  The previous summer I had been keeping track of a wild honeybee tree on the edge of an alfalfa field, and wondered, ‘if honeybees that are being fed can’t survive, how could wild bees?’ Of course, a good queen and hive strength are a big factor, but so are food sources. In a completely non-scientific way, I started making trips again to monitor the bee tree, a gnarled old locust. In March I saw no indication of life, though it was sunny and the temperatures were in the 50’s. I returned two more times in March, during mild days.  Again, nothing.
My fourth trip to the bee tree was on April 17 on a cool, sunny day. I was sure the colony had perished.  To my amazement, there were a number of honeybees buzzing in and out of the tree!  As an amateur beekeeper, this was fascinating. The colony had survived, and was now visiting a nearby swamp loaded with pussy willow catkins and lined with henbit and deadnettle blossoms, important early foods for the honeybees.
How had this colony managed to survive the drought? One factor might be the alfalfa field next to this tree. Last summer the local alfalfa fields were in full bloom three times. It’s rare to see this happen, because current dairy recommendations are to cut alfalfa at the bud stage to achieve proper nutrients for dairy cattle. All alfalfa fields have some blossoms, but during the drought, the stressed plants put out full blossoms early. Farm owners operate on a set harvest schedule, which allowed these blooming fields to stand uncut for some time. The fragrance was dramatic, and this sea of purple blooms was literally alive with all sorts of pollinators. The alfalfa blossom itself is not easy to access, it literally smacks the honeybee in the head; pollen deposit is the purpose of this tripping mechanism. Nevertheless, there were countless honeybees working the field.
Alfalfa nectar has been reported to be a major food source for honeybees in terms of pounds of honey per acre, when they can get to the blossoms. It seems the deep-rooted plants provided nectar and pollen when other sources may have been dried out, such as clovers and goldenrod.
I will continue to watch this fascinating wild colony, especially since last year they produced two valuable swarms. I have the great good fortune here in Wyoming County to be able to work with experienced keepers who generously share their knowledge and wisdom on this and many other honeybee subjects.   As one keeper said, “Nature finds a way.”
Debra Welch is an Ag & Natural Resources Association Program Educator at CCE Wyoming County in the Agriculture Department.  Beekeeping is one of her programs, as well as a hobby.