Mulch for Organic Vegetables—Grown in Place

Organic farmers and researchers utilize cover crops to reduce the labor and expense of organic mulches.

by Brian Caldwell and Ryan Maher
Organic mulches like hay or straw can suppress weeds and improve soil.  They are used by many small scale vegetable farmers, but the cost of the material and application may be prohibitive for larger operations.  However, there may be ways around this obstacle.  In recent years, organic grain farmers and the Rodale Institute successfully pioneered a practice of using rolled/crimped rye cover crops as mulches grown in-situ for soybeans.  What can organic vegetable growers in the Northeast learn from this approach?
Following up on farmer efforts, researchers at Penn State and Cornell University codified the practice.  It is often referred to as “Cover Crop-Based, Organic Rotational No-Till”.  When winter rye is planted in mid-September in NY, it produces heavy biomass of 7500+ lb/acre, sufficient to suppress weeds when laid down in place as a mulch. 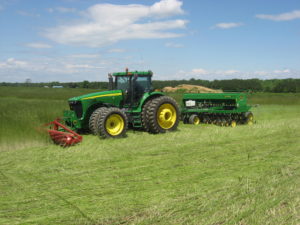 In late spring, when the plants are tall and in flower, they are run over with a roller-crimper (Fig. 1), which knocks them down and kills them.  Then, a heavy no-till planter is used to seed soybeans at a high density of about 250,000 seeds per acre, parallel to and in the same direction as the rolled rye.  In fact, this can be done in one operation, with the roller/crimper on the front of the tractor and the planter behind.  Usually, no weed cultivation is needed.  Research plot soybean yields using this method are generally as good as or better than those of conventionally-tilled organic treatments.
For a fuller discussion, please see this article from the Cornell Sustainable Cropping Systems Lab.
Organic corn plantings have had less consistent success on both research and commercial farms.  Whereas soybeans fix their own nitrogen, corn is a heavy nitrogen feeder. The soil often cannot supply enough N for both a heavy rye crop and subsequent corn plants.   Attempts to remedy this by using hairy vetch mixtures as roll-crimped, N-supplying cover crops have given variable results, sometimes with poor weed suppression and low corn yields. 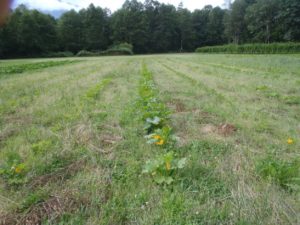 The same has been true to an even greater degree for organic vegetables in cool northern climates.  Planting cucurbits like pumpkins directly into rye residue is common among conventional growers in the mid-Atlantic, but has not worked for organic farmers further north.  The amount of cover crop mulch produced is often insufficient, and crop growth in low-N conditions is not enough to keep weeds down (fig. 2).
In NY and similar climates, highly skilled organic farmers have come up short using this approach.  What to do?  Is the idea completely impractical in cool areas for anything but soybeans?
Farmer creativity addresses the problem 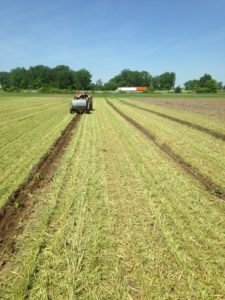 Michigan organic vegetable grower Tom Zilke made a fortuitous decision a few years ago.  His rye cover crop had gaps between planter passes.  In late May, rather than plowing the whole business under, he mowed the rye, crafted a shank to till the bare strips, and planted melons (fig. 3).  By narrowly tilling and fertilizing them, he allowed the melons to overcome the lack of fertility and rye root competition.  The soil was easier to work, warmer around the plants than under the adjacent mulch, and there was plenty of room to re-mow the rye when needed.  The crop succeeded though Tom found his melons grown on black plastic were more productive.  Tom continues to “play around with this idea”. 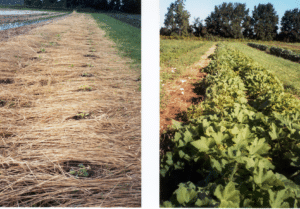 Meanwhile, in central New York, grower Lou Lego of Elderberry Pond Farm was working on a different angle.  Lou mowed a thick rye cover crop with a sickle bar mower and planted winter squash into it by hand.  He added a quart of compost into each planting hole.  The high fertility he had built up over the years resulted in a thick mat of rye mulch, which suppressed weeds well; and the squash plants benefited from the dose of compost (Fig. 4).  Once again, the crop was a success.  Variations on this method are now Lou’s standard approach for squash and pumpkins.  Sometimes he combines black plastic mulch with the rye.  The plastic creates a warmer, larger space for the squash roots between mowed rye strips.
Thus in some cases, “grow-mulch-in-place” methods have worked for cool area vegetable crops.  Several insights and cautions have emerged from these farmer experiences:

Research builds off of farmer experience
Such variable on-farm results call for field station research, where farmers don’t have to take a financial hit to refine the method.  Luckily, related research has already been done.  In the warm Beltsville, MD area, Dr. Aref A. Abdul-Baki pioneered work with vegetables and in-situ legume mulch in the 1990’s.  Farther north in NY, Cornell researcher Dr. Anu Rangarajan has been working on a strip tillage system for conventionally-grown vegetables.  Strip tillage loosens the soil in a 12-15” band where the crop will be planted and has the advantage of warming the soil and preparing a good seedbed for vegetables.  In many cases, deep strip tillage is used, which shatters compacted plow pans created by many years of conventional tillage.  The between-row area can be left undisturbed. In conventional systems, herbicides can be used to suppress weeds and soluble fertilizers are targeted directly to the tilled strips.  This approach has been adopted on thousands of vegetable acres in NYS and growers report better soil health and significant time savings.
Now these in-situ mulch systems are being adapted for organic production. One innovation from Dr. Dan Brainard of Michigan State is planting cover crops in strips to correspond with strip tillage. Grain drills often have two seeder boxes, one for large seeds like rye or peas, and one for small seeds like clover or timothy grass.  By blocking off units on the drill, it is possible to plant a small-seeded cover crop alternated with a large-seeded one.  For instance two rows of hairy vetch or crimson clover can alternate with two rows of rye.  At a typical spacing of 7.5” between drilled rows, that produces alternating double rows of rye and vetch with vetch strips every 30”.  For vegetable crops planted with 30” between the rows, crop row strips are tilled, targeting the legume cover crop.  Rye strips in between are undisturbed.
The pairing of hairy vetch and rye has performed well in research trials.  The strip-planted cover crops are flail mowed when the rye is blooming, after both rye and vetch accumulate considerable biomass.  Mowing earlier would result in less mulch to control weeds, and also the rye or vetch itself would tend to regrow, acting as a weed.  Then comes another twist.  Mowed residue in the vetch rows is moved aside with row cleaners just before the deep ripper strip tillage unit goes through.  This concentrates the aboveground mulch in the area between the rows, while reducing trash in the seedbed.  Vetch roots are easily incorporated into the planting row, adding nitrogen for the crop there.  Ideally, the crop will grow in a warmed, nitrogen-rich soil, with a heavy rye-vetch mulch between the rows that suppresses weeds.
This approach addresses many of the issues brought up by farmer trials.  However, more questions arise.  Does the mulch consistently suppress weeds?  What if some weeds break through—can they be cultivated through all that residue?  How are weeds controlled in the un-mulched crop rows?  Which cover crops are best in this system?  Are crops productive under it?  Can it be fully mechanized?
A suite of experiments in NY and MI is addressing these questions.  Preliminary results indicate that hairy vetch performs better in this strip-planted cover crop system than crimson clover.  The rye + vetch combination resulted in good fall cabbage yields, although a nitrogen-rich, straight hairy vetch cover crop did best.  However, more research is necessary before any firm conclusions can be drawn.  Stay tuned and visit our website for more information!
Brian Caldwell and Ryan Maher research reduced tillage for organic vegetable systems at Cornell University.