By Emily Nink and Hugh Joseph
Nothing captures summertime in New England like fresh, locally-grown heirloom tomatoes. Heirlooms have captured the imaginations of chefs and the hearts of farmers’ market shoppers, who just can’t seem to get enough of them; they are the poster fruit of the “buy fresh, buy local” movement. Small farmers have responded to the opportunity with gusto, but it hasn’t come without its challenges, namely, that heirlooms are prone to unpredictable flavors, a short shelf life, irregular shapes and sizes, cracks, splits, and blemishes. 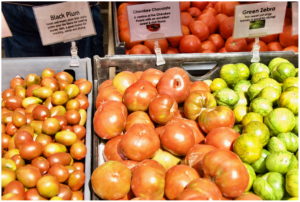 Heirloom tomato display at a Massachusetts farmers’ market with varieties separated and named, with some attributes also listed.

Despite these drawbacks, farmers are willing to assume the production risks to bring an allegedly better-tasting tomato to market, and consumers are certainly willing to pay for the experience. Knowing that taste quality varies considerably in the heirloom tomato market, both within and between varieties, we wanted to better understand how farmers choose to grow and market heirlooms. Our Research included in-depth interviews with fifteen Massachusetts heirloom tomato growers who sell at farmers’ markets to explore these questions:

(1) How do they decide how many and which varieties to grow?

(2) Why do some lump their heirlooms together in one colorful display while others separate and identify the varieties?

(3) How do they consider tomato flavor and texture when making broader production and marketing decisions?

The challenges of successfully growing tasty heirloom tomatoes begin with cultivar selection. With so many varieties available, farmers rely on a mix of strategies to identify desired flavors when choosing cultivars. For instance, one indicated, “I would say 75 percent we already know what they taste like, we’ve grown them before. And then I would say 20 percent, we would try new varieties that we read in the seed catalogs or hear about from other farmers that they really like the varieties.” Another grower described catalog descriptions of taste to be irrelevant, noting, “because taste and texture are affected by a lot of the other factors, you can’t put too much trust in the catalog descriptions on that. So [the catalog descriptions are] never sufficient.” A different producer related his own experience of marketing produce to the challenges faced by seed catalogs in describing seeds accurately: “I think that they have the same problems that we have, where you don’t want to say anything bad, because saying anything bad at all means you’ll never sell it. Obviously if you have it in your catalog you think it’s worth selling…so one lackluster adjective can doom it.” Overall, farmers explain that flavor ranks very high among decision factors for tomato cultivar selection, perhaps higher than for other produce such as peppers or salad greens (for which considerations such as disease resistance and shelf life can be more important).

These interviews with farmers were part of a larger project to explore heirloom tomatoes (heirlooms) in the context of a resurgence of interest in more traditional, authentic and distinctive foods, reflected in the popularity of farmers’ markets. Through online surveys and telephone and in-person interviews with Massachusetts farmers’ market consumers and vendors, we explored the relative importance of organoleptic properties, particularly flavors and mouthfeel, that influence consumer selection and farmers’ production priorities for heirlooms.
Results, reported as attribute rankings and related preference indicators, suggest that shoppers generally lacked familiarity with the names and flavor profiles of different heirloom varieties.
Findings suggest that, despite premium product prices and shoppers’ declared importance of taste, they were often inclined to overlook flavor and textural qualities in deference to visual appeal and greater varietal selection, and the authors question how much taste really matters to their popularity and to the overall viability of these heirlooms.
Joseph, H., Nink, E., McCarthy, A., Messer, E., & Cash, S. B. (2017). “The Heirloom Tomato is ‘In’. Does It Matter How It Tastes?” Food, Culture & Society, 20(2), 257–280.

Even when farmers are familiar with the cultivar flavors, catering to diverse individual tastes can be challenging. Farmers understand that taste is a very individual experience; one grower noted that he attends “a yearly meeting of area farmers, to discuss the best varieties…It’s a great forum to hear what people like and don’t like. But even there, I’ll grow one variety, but I’ll hear another farmer talk about how much they don’t like it, or how much they like a variety that I’ve tried and had fail, so it’s very individual.” Most farmers try to systematically incorporate feedback from consumers when making decisions for the following growing season; yet two farmers explained that they prefer to do taste tests with farm crews, whose opinions they trust more than shoppers’ tastes, which can be fickle. Several farmers noted that they had dropped a variety due to negative customer feedback or low sales attributed to tomato flavors. Perhaps these individualized experiences are part of the reason that some farmers choose to grow so many different varieties, aiming to have “something for everyone.” Some farmers described efforts to “stay ahead of the game” by growing new breeds (despite production risks), while some preferred to stick with tried-and-true popular varieties.
Furthermore, farmers agreed that environmental conditions on the farm can affect flavor, noting that taste and texture are not necessarily consistent even within a single variety, due to factors such as climate, period of the season, time of harvest, and soil. While calcium and soil pH management are standard practices for tomatoes, the farmers we interviewed noted how these decisions can affect heirlooms’ flavors. They then sample the crop in the field to assess the flavor prior to making harvesting decisions, such as whether to leave heirlooms on the vine longer to achieve higher sweetness.
Even when a tasty heirloom tomato crop has been successfully selected, grown, and harvested, farmers’ subsequent decisions can affect how shoppers perceive its quality. Farmers indicated efforts to educate consumers on tomato taste, including taste tests at markets; signage with information on sensory attributes, recipes, and other handouts; and oral communication with consumers at markets. One farmer who grows many heirloom tomatoes noted the importance of taste education at the market:
“We are 100 percent heirloom. Most of the varieties that we feature are unheard of, they’re generally unknown to customers…I find that sampling them is by far the absolute best way to get them interested, get them hooked, and illustrate the amazing differences in flavors.”
Yet regulations on cutting fresh produce for tastings at the market can impede taste education. According to one farmer, “we’re not really supposed to sample at the market, because of the Board of Health.”
At the farmers’ markets, growers in Massachusetts employ a range of marketing strategies with regard to heirloom tomato display. A minority separate and label heirlooms by cultivar in order to provide consumers with more information and clear choices, while most producers in our study lump all the heirlooms together into single displays, wherein varied colors, shapes, and sizes seem to appeal to shoppers as much as distinctive varietal flavors. When heirlooms are grouped together like this, all varieties are priced the same. Farmers who do this told us they didn’t see any immediate benefits to expending extra effort separating and identifying the varieties, since they typically sell out anyway. Yet in a stark contrast, these same vendors will sort and label their cherry tomatoes and their apples by variety, in order to cater to shoppers’ specific taste preferences and to differentiate them by price.
Generally, better quality is a key motivator for food shoppers to make the trip to a farmers’ market for their produce. In the long run, lumping heirlooms together in a single display may constrain sales growth if shoppers don’t feel that the benefits of better flavors and textures justify the price premiums (which in turn help farmers assume the extra burdens and risks of growing heirlooms). In particular, the diverse and inconsistent flavors and textures of heirloom tomatoes argues even more strongly for this approach; if tomatoes are to remain emblematic of the tide towards buying fresh, locally-grown food, they’ll need to preserve their reputation for superior taste quality. 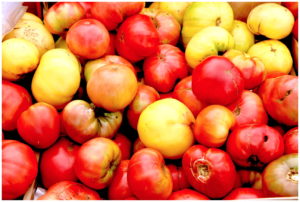 That’s a learning process for all involved, and could be abetted by displaying tomatoes in a way that provides shoppers with the specific information needed to make a decision that can incorporate flavor and taste without sampling. If shoppers are able to better discern which varieties among the hundreds available have preferred flavors and mouthfeel, farmers will gain a better sense of which ones are worth the extra time and risk to grow and sell, and could charge different prices for particular varieties, as they do for other produce. This process may reward small farmers who are already incorporating flavor into a broad range of production and marketing decisions, by creating customer loyalty to certain heirloom varieties that are known to be of superior taste quality.
Heirlooms are a challenge for small farmers—but those who grow them believe they are worth the extra effort. As one farmer said of the Hungarian Heart: “they’re very hard to grow actually. But when they grow well, they’re amazingly delicious.”
Emily Nink received her Master’s degree from the Tufts Friedman School of Nutrition Science and Policy in 2016. Her graduate research focused on community food security, and has worked to develop an urban agriculture program in Everett, MA. Correspondence may be sent to emilynink@gmail.com.
Hugh Joseph is Adjunct Assistant Professor at the Friedman School of Nutrition Science and Policy at Tufts University (Boston, MA). His primary research and fieldwork currently focuses on sustainable diets and food systems and on refugee agriculture. Correspondence may be sent to: Hugh.Joseph@tufts.edu.