Home » Posts » A Charter for CSAs in the USA and Canada

A Charter for CSAs in the USA and Canada

by Elizabeth Henderson
Similar to what happened in Japan after 30 years of Teikei, CSA in the US is facing something of a crisis.  Across the country, CSAs that once had waiting lists are now having trouble finding enough members. So, individual CSAs and CSA networks around the country have decided act together as a CSA community.  Taking a clue from the rapid growth of CSAs in new areas of the world (France, UK, all of Europe, China), we are proposing the adoption of a CSA Charter that provides a definition of what CSA is all about.  Together, regional networks and independent CSAs launched the Charter on CSA Sign-up Day, February 24, 2017 as a way to attract public attention and, hopefully, inspire many new people to join CSAs. The CSAs that endorse the Charter are posting it on their website along with a logo that identifies them as charter endorsers. In doing this, the CSAs commit to upholding the values of the Charter.
Flashback: In February 1979, a tractorcade of 6,000 farmers tied up traffic in Washington, D.C. to protest farm policy that ended parity, the pricing system that had linked farm prices to the costs of other sectors of the economy. The deepening farm crisis of the 1980s accelerated the loss of family-scale farms. Developers were grabbing up farmland at the rate of many acres a day. In the face of the grim reality that small and mid-sized family-scale community-based farming could disappear completely in the US, people who wanted to farm and support farms had to invent creative alternatives; that is how Community Supported Agriculture (CSA) was born.
In the words of Anthony Graham, a farmer at Temple-Wilton Community Farm in New Hampshire, one of the first two CSAs in the USA:
“Ideas have a way of hovering until the time is right or the right person or group can give it form. Booker T Whatley sounds like he was a forerunner in the idea of communities supporting farms and farmers, but I don’t think he can be said to have created the CSA concept.  In the mid 80’s what has now come to be known as CSA was an idea whose time had come, with roots in many places and in many people. It grew out of a sense of community and it came as an answer to a need. When the time was ripe it grew exponentially through the work of many people, not the least of whom were the farmers who recognized a great idea and ran with it.”  In the South, Booker T. Whatley researched and taught farmers “How to Make $100,000 from a 25 Acre Farm.” Inspired by Swiss and German examples, Robyn Van En, Trauger Groh, Anthony Graham, and Lincoln Geiger established the first CSA farms in the US in 1986: Indian Line Farm and Temple-Wilton Community Farm. Robyn became CSA’s Johnny Appleseed, spreading the concept at Biodynamic and Organic conferences across the country. Now in 2017, there are over 7300 CSAs in the US.
At the 1993 New York State CSA Gathering in Syracuse, I shared my thoughts on the significance of CSA: “A CSA is an idea – a tremendously flexible concept for a new consumer-farmer connection, an alternative system of distribution based on community values.  The economics of direct sales make this a win-win solution for farmers and consumers.  The farmer gets a decent price and the consumer pays less, since there is no middleman.  For the farmer, the CSA offers the possibility of a broad support group of people who genuinely care about the farm’s survival and who are willing to share the farmer’s risks.  Consumers have the opportunity to connect with the earth, know and trust the people who grow their food, and support the local economy and to transform themselves into the much more meaningful and empowered stance of a person who is taking responsibility of one of the most basic needs of a human being.  The big question we must answer – will this be sustainable?” 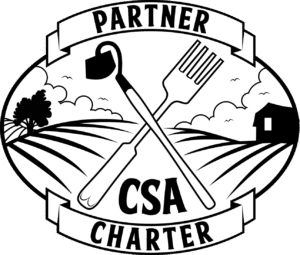 CSAs that endorse the Charter will proudly post this logo designed by Ruth Blackwell, farmer at Mud Creek Farm in Victor, New York.

Anthony Graham writes: “When we started the Temple Wilton Community Farm with a series of community meetings in the winter of 1985/1986, one thing we were sure of was that we were not selling anything – we were far more interested in community and in the ‘culture’ in agriculture. What we were attempting to set up was a way for a community of people to support the existence of a farm through good times and bad by making pledges of financial support over the course of one year. By agreeing to support the existence of the farm our members became co-farmers….At that time we were all talking and thinking a lot about how to bring form to the ideas that were swirling around, and in one of our conversations Trauger was the one who came up with the idea that the members could also be seen as farmers and we also decided that the farmers should make pledges as members (which we still do).”
Interesting to note is that CSAs that stick to their guns are not having trouble.  Temple-Wilton, which does not even have a price but asks members to contribute what they can afford and then take as much food as they need, still has a waiting list. Ruth Katz, a core member of a CSA in New York City, writes:
“We at Clinton Hill CSA have been very fortunate thus far (knock on wood!) that our membership has stayed up in the last few years. I’m aware that it can change at any time. I think one reason is that our neighborhood, for all of its gentrification, is still a bit of a food desert, with no really terrific supermarket. Honestly, the CSA is about convenience to some degree. We’ve kept up a long wait list, and that has been our most reliable tool to fill our membership each year; we’ve just almost doubled our winter share membership by offering the winter shares to the wait list. We also have started offering half shares, and that seems to be a strong and important tool to reach people who might not have room in their lives for a full share. And we have a wonderful farmer in Ted Blomgren; his expertise has grown so much in these last 15 years.”
Emilie Miyauchi of Just Food, a CSA network in NYC, writes:
“There’s been a lot of talk about how to make CSA more “consumer friendly” and flexible. While we understand this mindset, especially in trying to compete for NYC’s attention, we see this as a potentially endless pursuit. Someone else will always be there with an easier platform for food delivery, generally someone with a lot of up front capital. Our farmers and our communities can’t play by the same rules as companies or whatever comes next to replace them. The CSA model works and is equitable only when we recognize and try to meet the real needs of farmers and share-holders. We need to get better at listening to one another, expressing ourselves, and finding ways to engage and get creative when we feel our interests are in conflict.
We need to dig down deeper into what community is and what it can mean. Part of the hardest work of keeping the CSA model viable is building back community, protecting what exists, and galvanizing people around a shared sense of our entanglement with one another and the natural world. It is also time for CSA farms to address the tension between farm owners and farm workers to make CSA a model for healthy business and fair labor.”
Charter for CSAs in the USA and Canada
It is up to each CSA farm and its community to build a model that best suits them and to mutually ensure that the CSA upholds the principles of this charter.

Elizabeth Henderson started one of the first three CSAs in New York State – Peacework Organic CSA, in its 29th year in 2017.  She is lead author of Sharing the Harvest: A Citizen’s Guide to Community Supported Agriculture (Chelsea Green, 2007) and Honorary President of the international CSA network Urgenci. She can be reached at elizabethhenderson13@gmail.com.