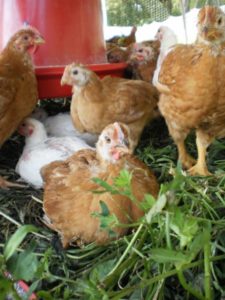 New York State Veterinarian Dr. David Smith reminds New York’s poultry industry to practice good biosecurity to keep their birds free from avian influenza and other diseases.  In the Northwestern and Central parts of the United States, animal health officials have detected a few new strains of Highly Pathogenic Avian Influenza (HPAI) among poultry flocks.  None have been found in the northeast yet, but animal health officials are concerned as birds continue to migrate back to the U.S.  HPAI infections in poultry result in significant illness and death of infected birds.  No human infections have been reported with any of these detections, either in the United States or abroad.
“HPAI has not been detected in New York State in many years and we want to make sure it stays that way,” said Dr. Smith.  “Migratory waterfowl are one way in which HPAI is spread to domestic poultry, but the disease can also spread by the movement of materials and people.  There are some simple steps that industry can take that have been proven to prevent avian influenza from entering a flock.”
Dr. Smith advises:

Dr. Smith advises that there are no public health concerns associated with these virus strains at this time and the CDC considers the risk to people from these HPAI infections in poultry to be very low. While the risk of human illness from these particular strains is very low, it is still wise to always practice good hand hygiene when working around poultry and their waste.  Thoroughly cooking poultry will safeguard against avian influenza and other illnesses that can be acquired through undercooked poultry.  The most severe form of avian influenza, known as H5N1, has never been found in the United States.
Early detection is important to prevent the spread of disease.  The warning signs of infectious poultry diseases include:

New York has been extremely proactive in preventing avian influenza among poultry flocks in the state.  The Department of Agriculture and Markets’ Division of Animal Industry has enforced a number of important regulations aimed at eradicating and controlling avian influenza in the live bird marketing system within the state’s borders.  These regulations apply to all sectors of the system including suppliers, distributors and live bird markets.  Source flocks from which birds enter live bird marketing channels are required to test negative for avian influenza prior to moving into the system.  State Animal Health Officials monitor the birds in the marketing system by verifying test records and monitoring sanitation levels at the live bird markets.
Poultry held in live bird markets are routinely tested for avian influenza by the Department’s Division of Animal Industry. Last year, approximately 35,000 birds in the New York live bird marketing system were tested for the disease. Positive findings for avian influenza in live bird markets are followed by trace backs to address possible infections in supply flocks.  If a market tests positive, it is depopulated and thoroughly cleaned and disinfected. Markets must be inspected and tested for avian influenza by Animal Health Officials prior to re-opening. New Jersey and Pennsylvania have similar programs to New York and working together, they provide an effective “early warning” network for avian influenza for much of the eastern United States.
According to the U.S. Census of Agriculture, there are 6,175 farms with poultry located in New York State. It is unclear how many poultry hobbyists there are in the state.
Additional information on poultry biosecurity can be found at http://healthybirds.aphis.usda.gov.
Poultry producers should report sick birds or unexplained deaths to the Office of the New York State Veterinarian at (518) 457-3502 or Federal Officials at (717) 540-2777 for further investigation. Early detection is key to preventing the spread of this disease. In addition, questions about testing and examination of sick poultry can be directed to Dr. Jarra Jagne, Extension Poultry Veterinarian at the Animal Health Diagnostic Center at Cornell University at 607-253-3900.