Weighing the Pros and Cons of Producing Birch Syrup

By Michael Farrell
Although many people have heard that you can tap birch trees, very few have actually tried to produce birch syrup, and folks who have boiled down some birch sap have often had negative experiences. The sugar content of birch sap is much lower than maple sap (usually between .5-1 brix), so it takes a very long time to boil it down in to syrup, especially when it’s done on a small scale without efficient processing technologies. The prolonged exposure to heat causes the glucose and fructose in the birch sap to develop a very strong and unappealing molasses-like flavor.
Since the sap is difficult and time-consuming to process and most people don’t like the taste of the finished product, the obvious question is “why would anyone decide to start tapping birch trees for syrup production?” There are many valid reasons to be skeptical of birch syrup production, yet surprisingly just as many reasons that you may want to consider it, especially if you already have an existing maple sugaring operation. This article highlights the four main reasons one should consider tapping birch trees in the spring. 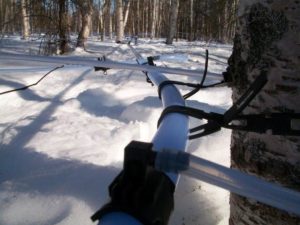 Although many people still use buckets or bags to collect sap from individual birch tree, tubing systems that have traditionally been used in maple syrup production are now being utilized for collecting birch sap in many places. Photo by Kevin Sargent.

This birch syrup was made by processing the sap to a high brix before boiling it for a limited time. Since over 90% of the water was removed from the sap, the time it spent under heat was reduced by over 90%. Just as the caramelization of fructose and glucose under heat causes maple syrup to darken and develop a strong flavor, the same process impacts flavor development in birch syrup. However, whereas maple sap is entirely sucrose coming out of the tree and only a small fraction gets converted to glucose and fructose by microorganisms, birch sap is primarily glucose and fructose coming right out of the tree. This is why it develops such a dark color and intense flavor when boiled for a long time.

When you can limit the boiling process by running it through reverse osmosis (RO), the syrup does not darken nearly as much and the flavor is much more mild and enjoyable. Thus, if you have an RO and enough birch trees, it’s likely that you could produce some high quality birch syrup. Although it is possible to make good-flavored birch syrup without an RO, it is very difficult to do so and you will wind up spending a great deal of time and energy to produce a syrup that may wind up with an unappealing flavor. Thus, without an RO, I would not recommend trying to produce birch syrup.

2. Birch Syrup is Not a Competitor with Maple Syrup
Because the taste of birch syrup is significantly different than the taste of maple syrup, it should not be considered a competitor or substitute for pure maple. The only thing they have in common is that they both originate from the sap of deciduous trees in North America- the flavor profile and uses for the syrup differ dramatically! In fact, rather than viewing birch syrup as a possible competitor with maple syrup, it can serve as an excellent companion product in the marketplace. When you have something different and unique for sale (such as birch syrup), it will open up new markets for your products that didn’t previously exist.

It is possible that selling birch syrup could get your foot in the door at retail shops and restaurants, and if they really like your birch syrup, perhaps they will also want to try some of your pure maple products. There is a saying that “you can make a little bit of money doing what everyone else is doing, or you can make a lot of money doing what nobody else is doing”. Since very few sugarmakers are currently producing birch syrup, it presents a wonderful opportunity for the latter.

3. You Can Achieve Greater Use of Your Sugaring Equipment when Producing Birch Syrup 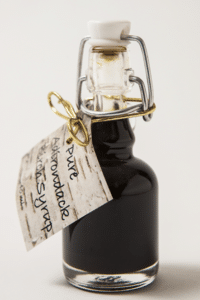 A small bottle of birch syrup produced at Cornell University’s Uihlein Forest in Lake Placid. When sold for $5 in a 40 ml bottle, this equates to approximately $500/gallon on a retail basis. Photo by Nancie Battaglia.

Whereas maple sap flow is based on stem pressure caused by fluctuations in temperature below and above freezing, sap flow in birch trees is based entirely on root pressure that occurs when the soil temperature warms to approximately 50F. The beginning of birch sap flow tends to coincide with the end of the maple sap flow, so it is possible to use your existing infrastructure to also produce birch syrup as soon as the maple season has ended. When you can produce two crops using the same investment in infrastructure necessary to produce a single maple crop, this can greatly improve your overall bottom line for your sugaring operation. You have already spent all the money on your sugarhouse, evaporator, reverse osmosis unit, filter press, vacuum pump, extractor, holding tanks, etc. This is a huge investment to only use for 6-8 weeks a year during the maple season. If you can add 2-3 weeks of birch syrup production, your investment in sugaring equipment could be paid off much sooner.

4. Prices for Birch Syrup are Much Higher than Maple Syrup
A few years ago I did some internet research on birch syrup and discovered that the prices for birch syrup were usually 3-4 times that of maple syrup, The main reasons for the high prices are the fact that the demand is greater than the supply AND it is usually more costly to produce in Alaska and western Canada- where the vast majority of birch syrup currently comes from.

However, the production costs for existing sugarmakers in the northeast are significantly lower since we already have all of the infrastructure in place from our maple operations. With lower costs and the same price structure based on limited supply and high demand, birch syrup production can be a very profitable enterprise. However, just because some producers are getting good prices does not mean people will be banging down your door asking to buy a 12 oz bottle of birch syrup for $25. To be able to sell birch syrup at high prices, you need to be willing to invest the time and resources in developing retail markets.

To complicate matters, most of the people you talk to will have no idea about the product or how to use it. It will take a lot of time and you will encounter your fair share of skeptical buyers and people who claim to not like the taste of it, but if you are persistent, I am confident that your sales efforts will pay off in the end.

The University of Vermont and Cornell University have active research projects on birch sap and syrup production. We are experimenting with different sap collection (vacuum tubing, gravity tubing, buckets) and processing technologies and techniques, as there is still much to be learned in this burgeoning industry. The industry is becoming more developed every year and the first ever International Conference on Birch Sap and Syrup will take place from June 12-14, 2015 at Paul Smiths College in the Adirondack Mountains of New York. The main purpose of the conference is to bring together many people who are currently producing birch sap and syrup products to network with each other, share ideas, and learn about the latest research and developments in this growing industry. It is also intended for sugarmakers who have birch trees and are considering adding birch syrup production to their existing operations. If you currently produce birch syrup or are considering doing so in the future, this is the conference for you.
The activities will kick off Friday evening with a welcome reception featuring birch-themed dishes along with a tasting competition in which everyone will get a chance to taste birch syrups from throughout the world and vote on their favorite. Saturday will feature several technical sessions and workshops along with a tour of Paul Smith’s College birch and maple sugaring operations and a birch BBQ dinner. On Sunday, there will be additional workshops and a tour of the maple and birch sugaring operations at Cornell’s Uihlein Forest in Lake Placid. Because the conference will be drawing people from throughout eastern Europe, Scandinavia, Alaska, and Canada, we are also scheduling an optional tour of sugaring equipment manufacturers in northern Vermont on Monday, June 15. Registration forms and additional information is available on www.paulsmiths.edu/birch.
Michael Farrell is director of the Cornell Maple Program and can be reached atmlf36@cornell.edu or (518) 523 9337 with any questions.