by Sarah Nechamen
East New York is a neighborhood in Brooklyn, New York that is home to 180,000 people yet for many years only four or five grocery stores. Many supermarket companies didn’t think opening a branch in this low-income part of the city would be economically viable, and the stores that were there just didn’t have the infrastructure to offer much beyond junk food.
“The grocery stores were old and didn’t have a lot of healthy food options, so you would see people on the subway with bags from Whole Foods which is about an hour away,” says Deborah Greig, Agricultural Director of East New York farms.
In 1998, a small group of people created East New York Farms to address this problem of food access. From the start, East New York Farms was careful not to come in with the attitude of ‘this is what you need and this is how we’re going to help you get it,’ but rather looked at community assets and how they and the residents could work together to bring in— and even produce— more fresh fruits and vegetables.
The organization started small, with one gardener selling her extra produce on the side of the street. Today, East New York Farms has an urban farm managed by 33 paid teenagers, a large farmers market and market stand, and a variety of workshops and programs to support the many gardeners in the community.
Through all of this success, East New York Farms never forgot their intention to work in close partnership with the community members. As Deborah puts it, “most of what we do is driven by the growers we work with or the community interests.” So when the organization staff saw that the Caribbean and Bangladeshi community members (which make up a large part of East New York’s population) were trying to grow crops from their subtropical homelands, East New York Farms wanted to help. Their half acre urban farm, though it may not sound like much to the rural farmer’s ear, has much more space for experimentation than any Brooklyn backyard gardener could ever dream of.
The Vegetable Trials
Deborah applied for and received a DEC Environmental Justice Community Impact grant to conduct trials of various Caribbean and Bangladeshi vegetables, with the hope of finding out what growing practices were needed for the crops to thrive in this much colder climate. 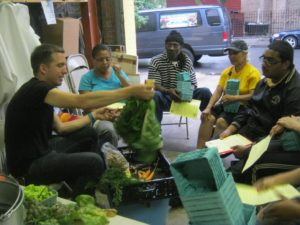 The vegetables that the project focused on are not crops that most Americans would think to throw onto their dinner plate, but they are used commonly in Bangladeshi and Caribbean cooking. Vegetables like dasheen, a variety of taro which the Caribbean population uses for its roots and the Bangladeshis for its leaves, and culantro, a relative of cilantro with a much stronger taste.
Some of these crops, like culantro, have already been grown successfully by home gardeners, but East New York Farms wants to try cultivating them on a larger scale to increase their availability to the community. Others, like pigeon peas, have been causing the gardeners a lot more trouble.
So far, East New York Farms has had mixed success with the crops. “The culantro was a complete bust,” admits Deborah. “We couldn’t even get it to germinate.” But the pigeon peas are doing quite well, even after some trouble with the tricky container-free seed starting method called soil blocking, and their second attempt at growing dasheen should produce a yield soon.
“You start dasheen kind of like a sweet potato where you let the sprout come up and then put it in the ground, and the first round just didn’t work,” Deborah tells me. This might be because the only place to get dasheen corms is at a corner store, and it turns out corner store corms aren’t the highest quality plant stock.
Weather Woes
I assumed that the biggest difficulty with growing these subtropical crops would be the cold New York weather, but Deborah tells me that daylight hours actually pose the bigger problem. Day length close to the equator tends to be pretty even throughout the year, varying by an hour at most, while New York sunsets happen at 4:30pm in December and 8:30pm in June. So if a plant from Jamaica moves to the City that Never Sleeps, it’s almost always going to be getting either too much light or not enough.
This has been an issue with pigeon peas especially, which the East New York Farm team has gotten to flower with relative ease but has yet to coax into fruiting. Once the peas get a little bigger, the staff is going to try shading the plants at different intervals so that the plants will get the amount of sun they would in the Caribbean or Bangladesh. 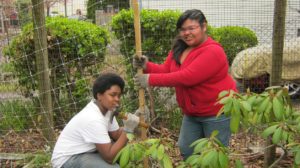 That’s not to say that colder temperatures in New York aren’t a problem; a city that gets over two feet of snow dumped on it every year is not going to be very friendly to a plant whose coldest days are usually 50⁰F.
“These crops are biennials or perennials in warmer climates,” explains Deborah, “And here they can only be annuals. So it’s hard to get them to the point of fruiting.”
Even crops that will produce a yield in a single year are often used to doing so much later in the year— by which time they are in danger of frost damage in this climate. In response, East New York Farms has become a group of not just farmers but breeders, saving seed from individual plants that produce a yield slightly earlier in the season in order to develop varieties that will thrive in New York’s short growing season.
Beyond Brooklyn
Since the project began, East New York Farms has been sharing what they learn about growing the Caribbean and Bangladeshi crops with their Caribbean and Bangladeshi gardeners. But now they want to share their project with the rest of New York too— and even with people outside the city— by holding workshops about growing the crops at various conferences.
Deborah has submitted workshop proposals to several grower conferences hoping she can spread the word to farmers outside of New York City about opportunities to serve Caribbean or Bangladeshi markets. After all, if a farmer were to bring Caribbean or Bangladeshi vegetables to farmers markets in neighborhoods with high Caribbean and Bangladeshi populations, they would sell an incredible amount of produce—a good situation for both the farmer and the customers.
East New York Farms has also applied to hold workshops at New York City based conferences held by the organizations Just Food and Green Thumb. The target audience at these will be urban gardeners who are interested in growing these crops for themselves or for their communities. If rural farmers start growing and selling these ethnic crops, and urban gardeners around the city also start growing them in their own communities, access to foods like dasheen and culantro in New York City could be vastly improved. 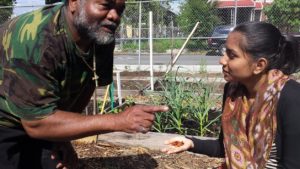 Alba and Afroza talking about beans.
Photo by Deborah Greig

And that is what Deborah sees as the solution to the lack of healthy food access in urban areas in general: not urban farmers producing all their own food in backyards and balconies, or large rural farmers shipping all the food in from across the country, but a partnership between local rural farms and small urban farms. The rural farms can bring in crops for which the urban growers can’t get enough volume on their small plots, like potatoes and cabbage, while the urban gardeners can grow the specialty and ethnic crops that the rural farmers haven’t tried yet or are just not interested in.
“Like bitter melon!” exclaims Deborah. “For years we’ve said ‘Please! Try to grow bitter melon, we can’t grow enough!’ But lack of access to resources and knowledge has prevented rural growers from attempting these unusual crops. Fortunately the urban gardeners are able to fill that niche, thanks in part to programs like East New York Farms’ vegetable trials, which research the best growing methods for these unusual, subtropical, but highly valued crops.
Sarah Nechamen is an undergraduate Plant Science major at Cornell and a student intern for the Small Farms Program. She can be reached at sdn27@cornell.edu.