Home » Posts » Rolling Out the Red Carpet for Soil

Rolling Out the Red Carpet for Soil

United Nations Declares 2015 as International Year of Soils
by Amy Overstreet
While we might not think about the soil underfoot every day, soil is essential to human survival. Soil
grows the food we eat, the flowers and trees that surround us, and provides the foundation for the recreational activities that we enjoy. We walk on it, shovel it, sweep it away from our homes and sidewalks, but soil is a life giving resource. It’s often misunderstood, but just as skin protects our bodies, soil protects the earth. Though we often take it for granted, in its absence we would quickly perish. In 2015, soil takes center stage as the world celebrates the International Year of Soils (IYS), as declared by the 68th United Nations General Assembly. The Food and Agriculture Organization (FAO) of the United Nations is heading up efforts along with the Global Soil Partnership.

Healthy soils are the foundation of agriculture. In the face of mounting challenges such as a growing global population, climate change, and extreme weather events, soil health is critical to our future. Healthy soil is essential as global demands rise for food, fuel, and fiber. Soils also play a crucial role in food security, hunger eradication, climate change adaptation, poverty reduction and sustainable development.
As part of my year-long detail to the National Soil Science Division, USDA-Natural Resources Conservation Service (NRCS), in Washington, DC, I had the privilege of traveling to New York City on World Soil Day, December 5, to attend the United Nations kickoff for the International Year of Soils. 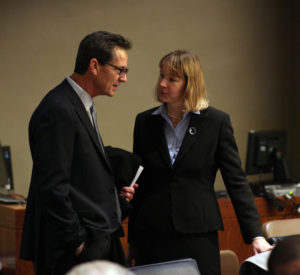 I was impressed to learn that the King of Thailand, His Majesty Bhumibol Adulyadej, was instrumental in helping declare 2015 as the International Year of Soils, along with the International Union of Soil Science (IUSS), a global union of soil scientists. The Union honored the King’s efforts by declaring his birthday, Dec. 5, each year as World Soil Day. His daughter, Her Royal Highness Princess Bajrakitiyabha Mahidol, was the special guest of honor in New York, and Norachit Sinhaseni, Ambassador and Permanent Representative of Thailand to the UN, presided over the ceremony. It was amazing to witness world leaders coming together to focus attention on soil. Presentations included messages about the serious challenges that are facing agriculture and food security, particularly in light of the fact that in the next 40 years, farmers and ranchers will need to produce as much food as they have in the last 500 years to feed a rapidly growing population.
Many agencies are working to promote IYS and spread the word about the importance of soil resources including the USDA-Natural Resources Conservation Service (NRCS). NRCS is producing and sharing brief videos to highlight each of the monthly themes and capture people’s attention so hopefully they will want to learn more. You can view these videos on the IYS-NRCS YouTube channel.

NRCS is producing and sharing brief videos to highlight each of the monthly themes and capture people’s attention so hopefully they will want to learn more. You can view these videos on the IYS-NRCS YouTube channel.

This is the year to celebrate soil and the many things that we enjoy in life which depend on this precious resource. I am confident that throughout 2015, the International Year of Soils will help raise awareness throughout the international community on the central role of soils in our everyday lives. I also hope this awareness leads to the establishment of proactive initiatives and fosters individual actions to protect this priceless resource.
For more information about soil health, contact your local USDA NRCS office or visit http://offices.sc.egov.usda.gov/locator/app.
Amy Overstreet is a 21 year employee of the USDA Natural Resources Conservation Service. She recently moved from her home state of South Carolina to begin working for Vermont NRCS in Colchester, Vermont. She will spend the year helping USDA celebrate the International Year of Soils.